MANILA, Philippines—Former Senator Antonio Trillanes IV has posted bail for the conspiracy to commit sedition charge filed against him in connection with the “Ang Totoong Narcolist / Bikoy” video series. 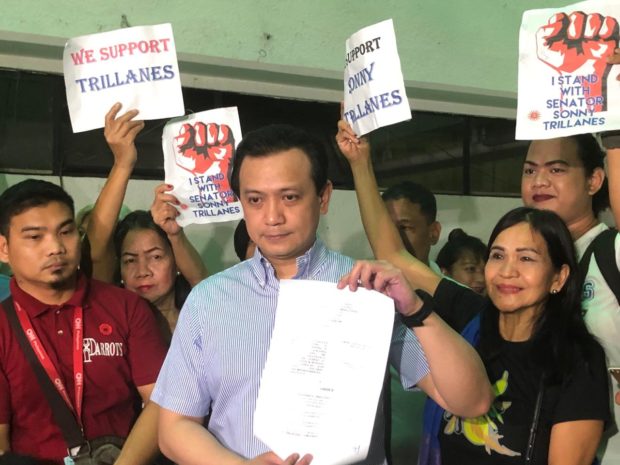 Fresh from an international trip, Trillanes went to the Quezon City Metropolitan Trial Court (MeTC) Branch 138 on Tuesday and posted the P10,000 bail for his temporary liberty.

Trillanes was out of the country when the warrant for his arrest was released. He arrived in Manila on Tuesday morning.

The Quezon City court issued warrants on the Department of Justice (DOJ) case against Trillanes and 10 others on Friday.

The charge stemmed from the Criminal Investigation and Detection Group’s complaint which drew largely from the testimony of Peter Joemel Advincula who claimed to be “Bikoy,” the hooded narrator in the “Ang Totoong Narcolist” videos.

DOJ indicts Trillanes, ‘Bikoy’ and 9 others of conspiracy to commit sedition

The videos which were posted online accused family members and allies of President Rodrigo Duterte of involvement in the illegal drug trade.

Trillanes had repeatedly denied involvement in the alleged acts to discredit the President, saying that the case is yet another move by the administration to harass members of the opposition.

The conspiracy to commit sedition case is among the string of legal suits the government filed against staunch Duterte critic in recent years.

The former senator is facing the revival of his rebellion case before a Makati court involving the 2007 Manila Peninsula siege.

He is also facing an inciting to sedition case before the Pasay Metropolitan Trial Court Branch 45 for his remarks on Duterte’s supposed hidden wealth and a libel case filed by Davao City Rep. Paolo Duterte and Manases Carpio before a Davao court.