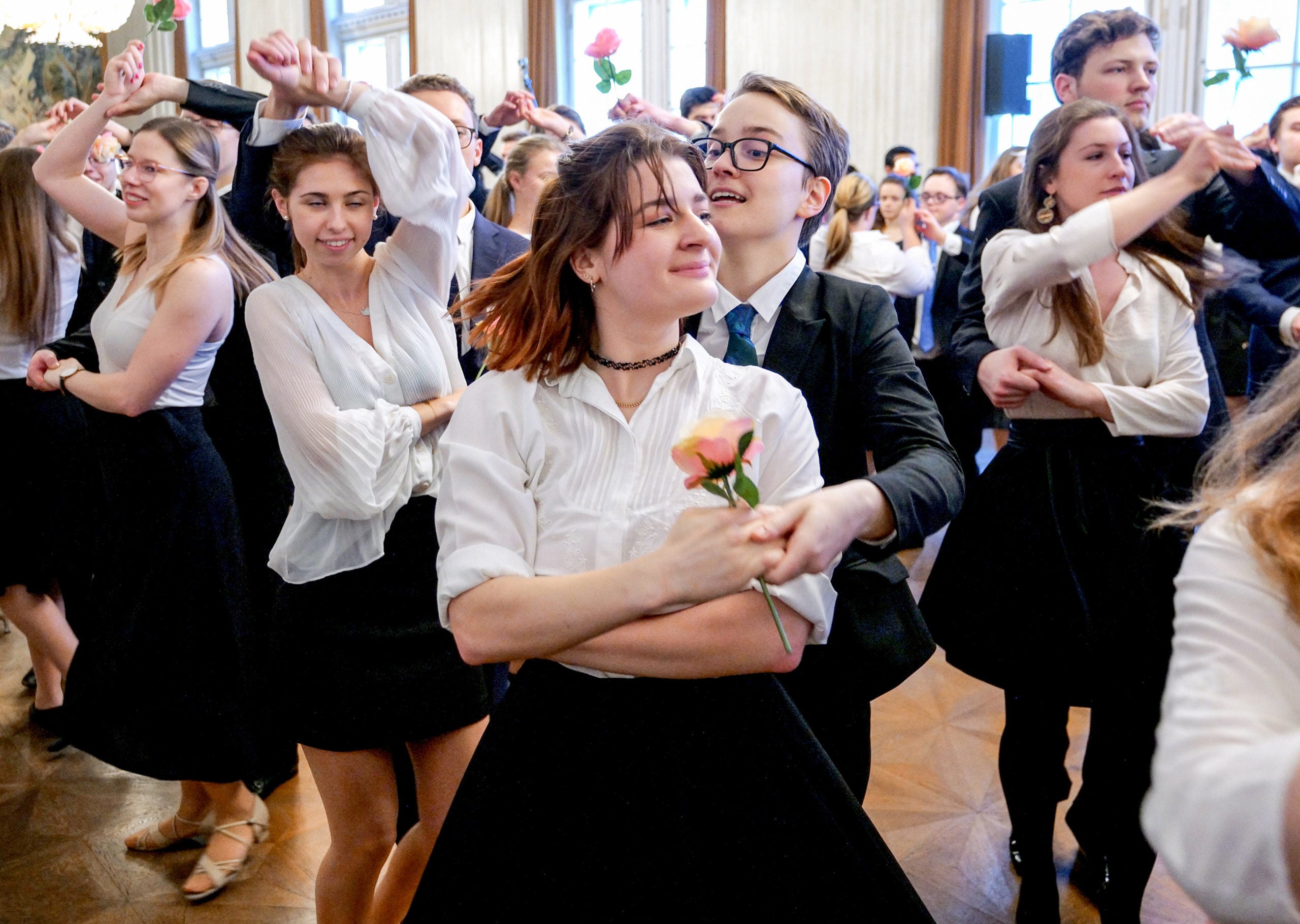 Germany’s Sophie Grau (R) and her dance partner Iris Klopfer take to the floor during their rehearsal at the State Opera in Vienna, Austria on February 16, 2020, prior to Vienna’s prestigious Opera Ball. – When Sophie Grau and Iris Klopfer take to the floor as two of the debutants at Vienna’s prestigious Opera Ball on Thursday, they will be dancing their way into history.
It will be the first time that a same-sex pair of dancers are among the “debutants” who whirl their way through the ball’s opening ceremony. (Photo by JOE KLAMAR / AFP)

VIENNA, Austria — When Sophie Grau and Iris Klopfer take to the floor as two of the debutants at Vienna’s prestigious Opera Ball on Thursday, they will be dancing their way into history.

It will be the first time that a same-sex pair of dancers figures among those whirling their way through the ball’s opening ceremony.

The event is the highlight of Vienna’s annual ball season, watched by some 5,000 people in the lavish State Opera building and about two million on television.

Sophie and Iris have been friends since high school in their native Germany and, like most of the other pairs, are not a couple outside the dance floor.

They showed few nerves at one of the final rehearsals on Sunday as they smiled and chatted with fellow dancers in between routines.

“Right now we’re really chilled but you always have that moment before you go on stage when all the nerves kick in,” Sophie, 21, told AFP, looking ahead to the big night on Thursday.

Like all the others taking part, Sophie and 22-year-old Iris had to make it through the ball’s rigorous selection process — the foremost requirement being mastery of the Viennese waltz.

While they insist they went through the effort purely out of love for dance, there is a message as well.

“We’re trying to use this platform…to just say that it doesn’t matter what you have in your pants or what you were born with, you can dance whatever part you want to,” Sophie said.

“All that matters for a pair of dancers is whether you dance well together and whether you have fun doing it,” she adds.

If anyone is uneasy at this re-invention of one of Vienna’s most venerable traditions, it’s certainly not ball organizer Maria Grossbauer.

She says that if same-sex couples applied to previous editions of the ball, they would have been welcome.

“The ladies dance very well and that’s why they were accepted, they fulfilled the criteria,” Grossbauer says, adding that in 2020 a same-sex pairing shouldn’t be a big issue.

In one respect Sophie and Iris will be sticking to the convention: the dress code.

In their application, the pair said that Sophie would be happy to don the black evening suit normally worn by the male debutant.

Sophie is matter-of-fact about this choice: “I have short hair, where would you put the crown?” she asks, adding: “We just decided that we would be comfortable with turning up like this.”

Grossbauer said that the organizers were happy to hear this as the contrast between black tails and white dresses produce a distinctive visual effect as the dancers move in unison.

As for who leads when they dance, Iris explains that the two of them take it in turn.

“Everybody that is a dancer… will know that there are so many men that can’t lead at all and so many women that can lead very well so it doesn’t really matter,” she says.

A neat way of showing that, as Grossbauer puts it, “within tradition you can have development and progress”.

“You can’t just stay stuck in your ways, you have to be open,” she says.