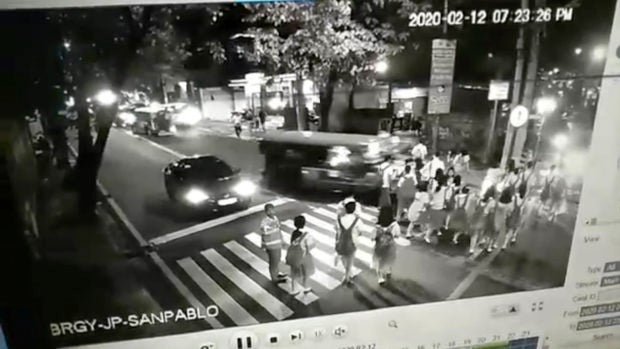 A photograb from the footage taken by a CCTV camera shows a passenger jeepney moments before it hits eight students of Gen. Pio del Pilar National High School at the corner of J.P. Rizal Avenue and Mabini Street in Barangay Poblacion, Makati City, on Wednesday night. (CCTV courtesy of Makati Police Station)

MANILA, Philippines — Motoring journalist and vlogger James Deakin paid a visit to one of the students who got rammed by a jeepney in Makati last Feb. 12.

In Deakin’s Facebook post on Sunday, Deakin showed a picture of 14-year-old Alvin, who was “the most seriously injured survivor of the tragedy.”

“He has multiple lacerations and bones protruding from his flesh and is in a lot of pain,” Deakin said of the student’s situation.

The student is one of the eight who got hit by a wayward jeepney as they were crossing J.P. Rizal Avenue near the corner of Mabini Street in Barangay Poblacion.

READ: 14-year-old student dies, 7 others hurt as jeepney hits them in Makati

Aside from not having a license, the jeepney driver later admitted that he was a drug user.

READ: Jeepney driver who ran over students has no license, tested positive for drugs

Deakin further revealed the student and his family had not received financial assistance from the jeepney operator.

“Someone representing the owner did reach out to ask if Alvin had died yet, then tried giving a token (and sorely inadequate) amount of cash and some groceries, but they insisted that Alvin’s father sign something first,” Deakin wrote on his post.

“There were a couple of problems with that. First, Alvin’s father cannot read or write. And secondly, the guy offering had been previously arrested for drawing a gun on a security guard in a totally unrelated incident last April.”

“So despite the fact that’s Alvin’s father (a single parent) doesn’t earn nearly enough from his job driving a garbage truck to cover any of these medical expenses from the ICU, he still had the presence of mind not to sign something he can’t comprehend that was given to him by someone who had been previously arrested for intimidation and grave threats,” Deakin added.

And aside from financial burden, the journalist said that the student’s father “has been getting the run around” from the operator.

“Among other things, he is told that he cannot seek help from the [Public Attorney’s Office] PAO because the Jeepney operator approached them first and they both cannot be represented by PAO,” he said. “At least that is what he was told.”

“It sounds absurd and I really don’t know if it’s true or not (can someone with some legal training here confirm pls) but you can see how they are petrified of being taken advantage of because of their lack of resources and knowledge.”

He then asked his followers if they can help the student through donations.