Jeepney driver who ran over students has no license, tested positive for drugs 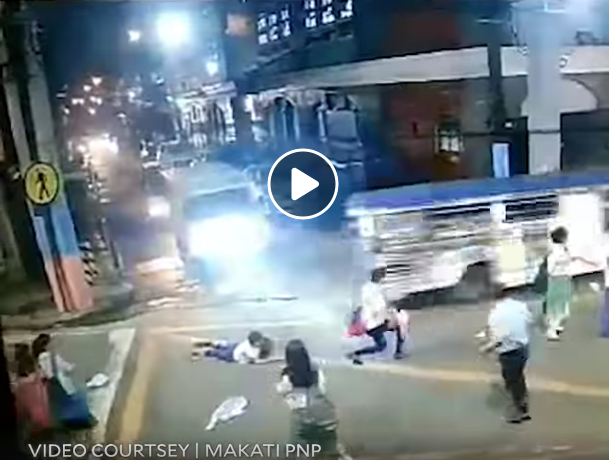 A screenshot of the jeepney that plows through a group of students along the busy J.P. Rizal Avenue near the corner of Mabini Street in Barangay Poblacion in Makati. The video was provided by the Makati City Police

MANILA, Philippines – The jeepney driver who ran over several students, which injured six and killed a 14-year-old boy while  crossing the designated pedestrian lane in Makati City, does not have a license aside from testing positive for drug use, police officials said on Thursday.

“Initial result, yes,” Simon told INQUIRER.net after being asked about the issue.  “Dadaan pa sa (He would undergo) confirmatory test.”

Because of these developments, Tamparong is now facing various cases in relation to traffic laws and drug use.

The jeepney driven by Tamparong was traversing along J.P. Rizal Avenue in Barangay Poblacion on Wednesday night when it swerved to avoid a car and plowed through several high-school students, whose ages range from 13 to 17, crossing the street.

Tamparong claimed he lost control of the vehicle, however, a CCTV video showed he was recklessly driving the jeepney along the road, even counterflowing in the busy area.

The Makati police chief also noted that based on the footage, the jeepney stopped right in front of Poblacion’s covered court after hitting the students. “[If it had no brakes, it] would have crashed [against] the wall of the park beside Pasig River,” he added.

The students were rushed to the emergency rooms of the Ospital ng Makati and Makati Medical Center for treatment.

Makati Mayor Abby Binay assured the vitcms’ relatives that justice would be served, urging the suspension of the jeepney’s franchise.  Binay also previously urged authorities to submit the driver to a drug test.

(The Makati police are currently investigating the incident and I ordered them to immediately subject the jeepney driver to a drug test. I also ordered to find the jeepney operator and recommend to the LTFRB the immediate suspension of its franchise.)