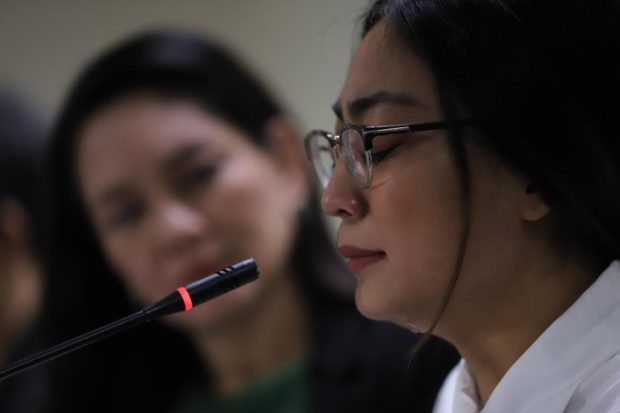 MANILA, Philippines — A trafficked Philippine offshore gaming operator (Pogo) worker from Taiwan tagged a certain “Michael Yang” as an alleged government protector of the company she was forced to work for.

Taiwanese national Lai Yu Cian, or Ivy, surfaced at the Senate on Wednesday to recount her story after she reached out to the office of Senator Risa Hontiveros for assistance.

Hontiveros previously led an inquiry into crimes connected with Pogos, including prostitution and human trafficking.

Lai, who was promised a job in an advertising company, arrived in the Philippines October last year on a 30-day tourist visa.

But a week upon her arrival in the Philippines, she was forced to work for a Pogo company.

“The job I am doing….I work as an admin. I help my boss..(I’m) in charge of the driver and then housekeeping,” she said.

After she experienced mental, physical and even sexual abuse, Lai insisted on leaving and returning back to Taiwan.

However, her employers confiscated her passport.

Lai also said that when her “boss” gets angry at her, she would hear them mention a certain “Michael Yang.”

“I heard about once or twice when my supervisor they get mad at me or sometimes they mention Michael Yang but I don’t know who is he. My boss always says, he didn’t explain to me, just sometimes he shouts at me and in my memories, once or twice I hear the name,” she added.

Hontiveros said her office has not yet verified the identity of the “Michael Yang” that Lai had mentioned.

When asked if the “Michael Yang” is also the same person as the President’s former economic presidential adviser who carries a similar name, the senator said her office “hasn’t gone into checking out identities or persons or any other such issue.”

‘Not an isolated case’

Anti-crime advocate Teresita Ang See, who joined Hontiveros and Lai during the press conference, said the latter’s case was not an isolated one.

“This is not an isolated case. We have brought this up many times before,” Ang See, head of the Movement for Restoration of Peace and Order (MRPO), said.

Ang See said a 24-year-old Chinese woman, “Ming,” came to her and asked for help due to threats from her employer.

“This one is a Chinese national working with the company in Zambales… in Bataan Free Port Zone in Zambales,” she said.

Ang See said the Chinese woman wanted to leave the company because she was not aware that it was involved in cyber fraud.

She said “Ming” was able to seek help from a Filipino who then informed authorities of the situation.

“After the rescue of the anti-kidnapping group, the threats against her and against the people who helped her escalated,” she added.

After “Ming” was rescued, Ang See said the Chinese national filed a case against her employer, but there was an alleged attempt to bribe her.

“Fortunately, this girl did not,” she added.

Ang See said that when “Ming” refused the money, the alleged broker from the company purportedly told the rescued Chinese national that they would be able “to buy off the prosecutors, to buy off the judge, to buy off all policemen.”

The Chinese woman’s case was “just dropped like that without going to the extent of going to the DOJ [Department of Justice],” Ang See said.

“But fortunately, I’m so happy that this girl took courage and persisted to pursue the case…At first she was afraid to tell her family about her problems but we said, your best weapon against these criminal syndicates is public opinion, public pressure, public assistance like the Senator’s office,” she said.

“We told her that the (MRPO) will be behind her all the way,” she said.

Ang See said she may ask Sen. Ronald “Bato” dela Rosa to look into the alleged backer Lai claimed was namedropped by her employers.

“Maybe I’ll ask Senator Bato to look into this,” Ang See, speaking in Filipino, told reporters in a separate interview after the press conference.

She, however, said the “Michael Yang” may just have the same name as the former presidential economic adviser of the President.

“How would we know? Maybe they just coincidentally have the same name or they are just using his name. Maybe to protect themselves, that’s the name they will mention,” Ang See said.

Asked for his comment on the matter, Dela Rosa, the country’s former top cop, said these trafficking victims should file a case against the purported government backer.

“They should file a case,” he told reporters in Filipino in a chance interview. “Those who complained of being trafficked, bring them to me. We’ll help them.”

Dela Rosa said even if the alleged backer from the government turned out to be close to the President cases should still be pursued against them.

“As the President said, ‘No matter who that person is, even if it’s one of my children, if they are involved in foolishness, I’ll go after them, there will be no cover-up,” he said.

“They should be charged…they are not special that could be exempted,” she added.