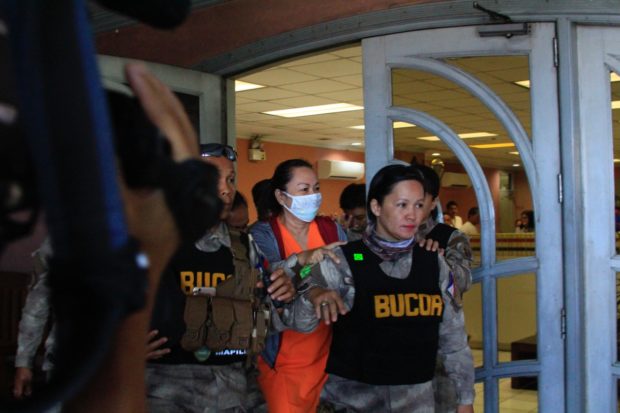 Officers of the Bureau of Corrections ensure the safety of pork barrel scam mastermind Janet Lim Napoles as she attends a court proceeding at the Sandiganbayan Third Division, where she is facing graft and plunder cases. INQUIRER.net photo / Gabriel Pabico Lalu

MANILA, Philippines – Pork barrel scam mastermind Janet Lim Napoles showed up at the Sandiganbayan on Wednesday to sign the pre-trial order on the graft charges filed against her, former Senate president Juan Ponce Enrile, and other co-accused.

Napoles, who was ordered by the Third Division to appear before the court, was brought by personnel of the Bureau of Corrections (BuCor).  She signed the pre-trial order before the division’s clerk of court inside the Sandiganbayan’s library, where she was held up momentarily before entering the courtroom.

With these developments, the trial proper of the graft case against Enrile and the other named repondents would start on February 26 (Wednesday), with the prosecution presenting its first witness.

Enrile and Napoles are facing both graft and plunder charges after the former Senate president allegedly received kickbacks worth P172.8 million for allocating his Priority Development Assistance Fund (PDAF) or pork barrel to nonexistent organizations created by Napoles.

The scheme, where lawmakers would supposedly connive with Napoles’ bogus foundations to fund ghost projects, was the same case used in the other graft and plunder charges against Enrile, Senator Ramon “Bong” Revilla Jr., and former Senator Jinggoy Estrada.

The businesswoman is currently detained at the Correctional Institute for Women (CIW) after being convicted of plunder in the Revilla case.  Revilla meanwhile was acquitted after the court received no direct evidence to link him in the scheme.

The hearings of the Enrile graft and plunder cases have been delayed for numerous issues, including the lack of signatures on the pre-trial order and the request of camps to check on the evidence presented by the prosecution.

During the hearing last January 29, when Enrile signed the pre-trial order, Napoles was given until January 31 to appear before the Third Division’s clerk of court to sign the documents.

However, the deadline passed, displeasing the division justices.  Napoles’ camp and the CIW officials claimed that Napoles was facing several “health issues.”

Without the pre-trial order — a document that includes facts stipulated and evidence marked for use in the proceedings — the trial would not commence.

Napoles was ordered to present her medical records on Tuesday, but the division clerk of court said that she has yet to submit such documents.

The plunder trial, meanwhile, was canceled after it appeared that Enrile’s counsel only received copies of the pre-trial order — which Enrile recently signed — just recently.  The hearing was rescheduled on February 18 (Tuesday), as the Enrile-related cases are heard every Tuesday afternoon and Wednesday morning.