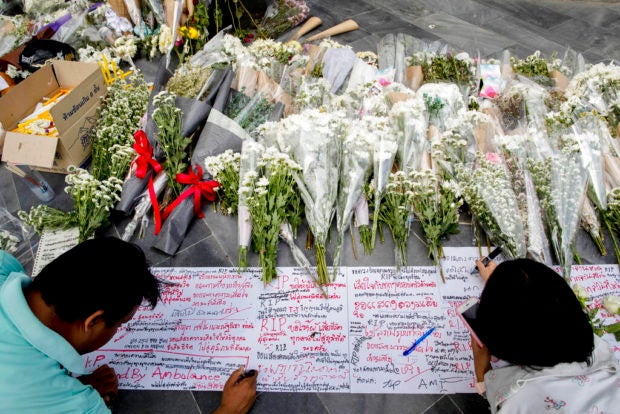 NAKHON RATCHASIMA, Thailand — Authorities in northern Thailand began releasing bodies to relatives Monday after security forces cornered and killed a soldier who carried out the country’s worst mass shooting in an hourslong siege at a shopping mall.

The soldier killed 29 people starting with his commanding officer in a stunning tragedy that began Saturday and ended Sunday morning when security forces shot dead the heavily armed attacker in Terminal 21 Korat, an airport-themed mall in Nakhon Ratchasima.

The gunman, Sgt. Maj. Jakrapanth Thomma, 31, was infuriated at a land deal brokered by his commander’s mother-in-law, as far as authorities have been able to determine. She was another of his victims.

The death toll surpassed Thailand’s last major attack on civilians, a 2015 bombing at a shrine in Bangkok killing 20 people that was allegedly carried out by human traffickers in retaliation for a crackdown on their network.

Messages of sympathy for the latest tragedy were sent by several countries.

The U.S. Embassy said it “stands with the people of Thailand, saddened by tragic events in Nakhon Ratchasima.”

More than 1,000 people mourned the victims Sunday night in a vigil led by Buddhist monks at the city’s town square. They lit candles and chanted.

“We are here today to pray in order to send the souls of those who die to heaven, and we ask the spirits to accept those souls. So those souls can be holy, be in heaven with goodness and beauty,” said artist Suwanee Natewong.

Many of the 58 wounded are still in bad condition. The Public Health Ministry sent a mental health crisis team to help relatives of the deceased cope with their losses.

Survivors and victims’ families at the city’s hospitals recounted their ordeals.

Cpl. Korakot Ampanngeun said he had been ordered to block a road so no one could go toward the gunman.

“So I was signaling to oncoming traffic, when I turned around and saw him. If I had not, I would not have survived,” he recalled. “I tried to run and find somewhere to hide. But I could only take two steps and then I heard the sound — ‘bang.’ My leg just went and I couldn’t walk. A good Samaritan helped carry me away.”

A soldier with a grudge gunned down 26 people and wounded 57 in Thailand's worst shooting spree before he was fatally shot inside a mall in the country's northeast on Sunday, officials said. https://inq.news/ThaiMassShooting

Posted by INQUIRER.net on Sunday, February 9, 2020

High school student Nachote Chotiklang said he was in his mother’s car as she passed the gunman’s vehicle.

The assailant “got out of the car and fired into the window. At that, I ducked down and didn’t do anything until I felt that car hit something. It hit a tree.”

When the teenager was asked what happened to his mother, Nachote shook his head. Another man explained that she had died.

Rachanon Kanchanamethi was riding a motorbike home when the gunman fired at him. The 13-year-old middle school student was his family’s only child.

His father spoke at the first day of his son’s Buddhist funeral.

“I don’t want to lose him like this,” Nuttawut Kanchanamethi said. “This is too sudden. We had plans for him, growing up. That’s all. We didn’t impose any expectations on him.”

Nuttawut paused for a long moment.

“I want to continue taking care of him, but I no longer have that opportunity,” he said, breaking into sobs.

The bodies of security personnel began to be flown Monday morning to the capital, Bangkok, for funerals.

Nakhon Ratchasima was not prepared for killing on such a scale. The public hospital’s lone forensic doctor is performing autopsies before the bodies are released to families for cremation, but families were told he can only do six per day, so some won’t be able to retrieve their loved ones until Tuesday.

Read Next
4 in Cordillera negative for coronavirus after tests
EDITORS' PICK
House energy committee chair Arroyo bats for cheap electricity
Why Tagle is a leading papal contender
Powered by style, innovation and passion
In Borongan, nuns play hoops (not mahjong)
PH resumes talks with China on Chinese-funded transport projects
A laptop that maximizes your WiFi so you can maximize your productivity
MOST READ
Imee Marcos bares illegal importation of white onions
Why Tagle is a leading papal contender
Zubiri on SRA mess: Shameful, disgusting
Ogie Alcasid positive for COVID-19: ‘We keep ourselves protected and yet inabot din’
Don't miss out on the latest news and information.