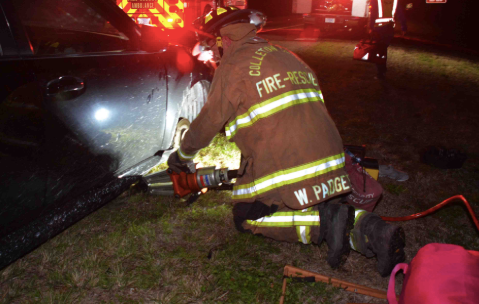 A trapped woman used her toes to call for help in the United States.  Image: Colleton Country Fire-Rescue website

Despite getting her hands crushed while changing her car tire, a resourceful woman was able to call the emergency hotline in the United States by using her toes to dial on her cellphone.

The unidentified 54-year-old woman suffered from a flat tire while driving, forcing her to pull over to a breakdown lane, as per Colleton Country Fire-Rescue’s statement on its website on Feb. 2.

While replacing the flat tire with a spare, the jack apparently slipped, causing the car to fall. The impact trapped both of her hands between the tire and the car’s fender.

The woman was trapped in a dark side of the highway for 35 minutes. According to the report, she managed to remove one of her shoes and use her toes to call for help.

When the rescue team arrived, they used a prybar to detach the woman from her entrapment to no avail. The equipment was deflating the tire, which caused the car to drop further down.

Eventually, they were able to free one of the woman’s hands. Another group of responders lifted the car and finally freed her using other equipment.

She was trapped for around 45 minutes.

The fire rescue said the paramedics immediately treated her injuries, then transported her to a hospital.  Cha Lino /ra