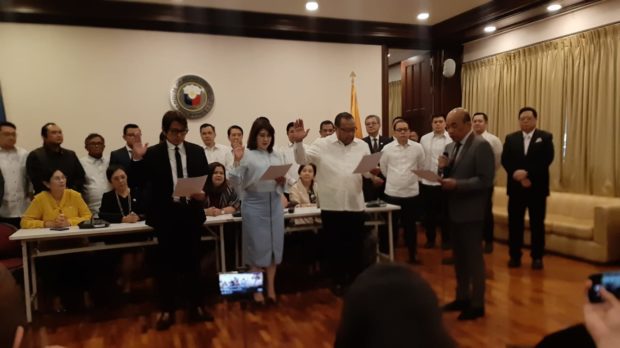 Among the new members were two House officials–Deputy Speakers Neptali “Boyet” Gonzales of Mandaluyong and Dan Fernandez of Laguna.

This move increased NUP’s number in the House to 62, including the presidential son and Davao City Rep. Paolo Duterte who is an adopted member of the party.

NUP President and Cavite Rep. Elpidio Barzaga said that with more numbers, the passage of Duterte’s priority legislation would be easier.

“The NUP has always been aligned with the administration and the more members we have, the better the coordination in passing the priority measures of the President,” Barzaga told the media.

“There are several problems right now. There are problems pertaining to the coronavirus, resettlement area for Taal Volcano victims, and all the programs of the President would be much easier if we have the numbers to support the President, not to mention that right now we are already preparing for the budget for the year 2021,” he added.

Gonzales said that in his several terms as a congressman, he has seen political parties come and go, with NUP staying strong.

“More importantly, we like to be at home and we consider the NUP as our true home in Congress na nakakatulong sa ating bansa,” Gonzales said.

Fernandez, meanwhile, said he joined the NUP  “to help pursue the President’s legislative agenda in the House, and because of his close personal ties to its members”.

For Deputy Speaker and Surigao del Sur Johnny Pimentel, a member of PDP-Laban, it is the prerogative of congressmen to choose their parties.

The move, Pimentel said, is not a cause of alarm, saying “this is how Philippine politics work.”

“This is not the first time it happened,” Pimentel said.

“It has a propensity for turncoats to gain favors from whoever is in power. I wish them all luck,” he added.

In 2019, several members of PDP-Laban, where Duterte serves as chairman, joined NUP, including the presidential son and Davao City Rep. Paolo Duterte who is an adopted member of the party.

During the surge of the party-switching, PDP-Laban president Sen. Aquilino “Koko” Pimentel III said that while may not like the idea of party switching, he also accepts that commonly happens in the political sphere in the Philippines.