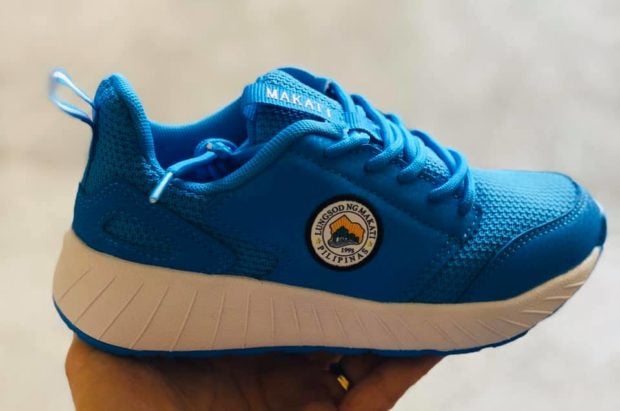 MANILA, Philippines — Students of Rizal Elementary School and Fort Bonifacio High School on Tuesday became the first recipients of the latest version of “Air Binay,” a pair of rubber shoes that the Makati City government distributes for free yearly to its public school students.

Mayor Abby Binay and Vice Mayor Monique Lagdameo, along with other city hall officials, led the distribution of the “AB 3.0.” Over the next days, over 90,000 public school students in the city, from kindergarten to Grade 12, are expected to receive a pair.

Binay encouraged students to share the news about their new kicks on social media. “Since the start of the year, there’s been nothing but bad news. For a change, let’s post good news,” she said.

The latest version of the rubber shoes is blue with a white midsole. The city government’s logo is featured on the sides while the word “Makati” is written on the lace keeper.

Bidding records showed that city hall allotted P153.8 million in October for the purchase of the new shoes, slightly higher than the 2019 budget of P148.9 million for AB 2.0.

The project was awarded in December to Pasay-based Amsor Enterprises, which offered the lowest calculated bid of P153.7 million.

The pair of rubber shoes is among the items given under the city’s Project Free, or Free Relevant Excellent Education, which provides free school supplies and uniforms to public school children.

Netizens were the first to dub the rubber shoes Air Binay — after Nike’s famous Air Max line — when the city government released the first version in 2018.