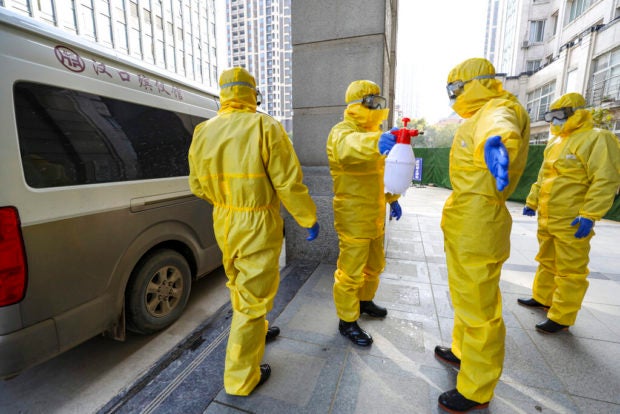 In this Jan. 30, 2020 file photo, funeral workers disinfect themselves after handling a virus victim in Wuhan in central China’s Hubei Province, Thursday, Jan. 30, 2020. As global anxiety about a new virus rises, Chinese authorities are striving to keep 50 million people in cities at the center of the outbreak both isolated and fed in the biggest anti-disease effort ever attempted. (Chinatopix via AP, File)

Mishustin said at a Cabinet meeting that it is one of the measures outlined in a government-approved plan of action for preventing the virus from spreading in Russia.

On Friday, Russia reported its first two confirmed cases of the novel coronavirus or 2019-nCoV: two Chinese nationals who were hospitalized in two different regions of Siberia. It wasn’t immediately clear from Mishustin’s statement whether they would be deported.

Like other countries, Russia has halted most of its air and train traffic with China, shut down its land border with China and Mongolia and temporarily stopped issuing work visas to Chinese citizens.

On Monday, authorities announced Russia was suspending the last operating train that connects Moscow and Beijing and all trains between Russia and North Korea.

Deputy Prime Minister Tatyana Golikova also said that several Russian planes would fly to China on Monday to evacuate Russian citizens. Golikova said there are currently around 130 Russian nationals in Hubei province, the epicenter of the outbreak.

Meanwhile, the Czech Republic has announced plans to suspend all flights to and from China in an effort to prevent the new coronavirus from spreading.

About 620,000 Chinese tourists visited the Czech Republic in 2019. The first direct flight connection between Prague and China was established in 2015. Three Chinese airlines operate flights to Prague from Shanghai, Beijing, Chengdu, and Sian (Xi’an).