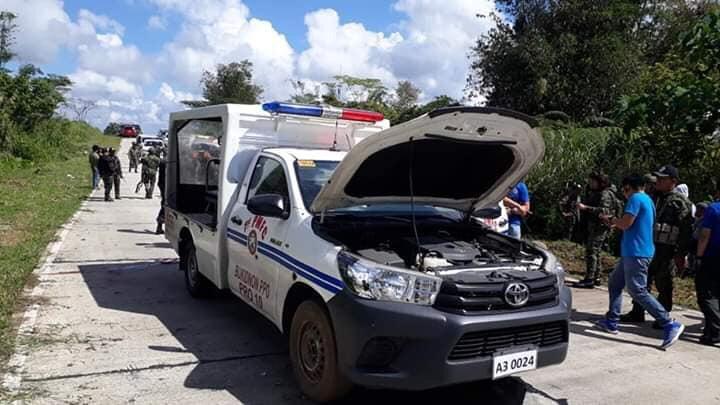 State troops inspect the site in Talakag, Bukidnon where the convoy carrying Brig. Gen. Joselito Salido, deputy chief of the Directorate for Integrated Police Operations in Eastern Mindanao, was ambushed by alleged NPA fighters on Wednesday, Jan. 29, 2020. (Photo from PNP)

Brig. Gen. Joselito Salido, deputy chief of the Directorate for Integrated Police Operations in Eastern Mindanao, survived the attack staged by the communist rebels along Kilometer 26 in Brgy. Tikalaan-Dominorog at about 6:40 a.m.

The convoy was composed of members of the Operational Readiness and Performance Accounting team led by Salido, escorts from the 1st Bukidnon Provincial Mobile Force Company (PMFC), and a team from the Regional Mobile Force Battalion.

The pickup truck leading his three-vehicle convoy took on heavy gunfire leading to the death of Sumaylo and wounding of Genilla, Senior MSgt. Javanie Malinab and Capt. Ramil Gighe, all of the 1st Provincial Mobile Force Company of the Bukidnon police.

Police returned fire, leading to a gunfight with the armed men who staged the ambush.

Amid gunfire, Salido’s bodyguards were able to bring him to safety out of the ambush site.

Salido’s convoy came from Cagayan de Oro and was headed to Don Carlos town for an inspection of a police unit at the village of Pinamalay.

Salido was visiting the Provincial Mobile Force Company at Pinamalay.

Salido, who has jurisdiction over police in the regions of Davao, Caraga and Northern Mindanao, had been going around to check the capabilities of police mobile forces.

The convoy was originally set to take the Sayre Highway, the traditional route, but diverted to a new route through Talakag town to save on time.

“He was moving around to oversee police operation when the ambush took place,” Banac told reporters at a press briefing in Zamboanga City.

Banac said police have yet to determine the attackers’ identities or their backgrounds, saying only that “criminal elements are behind this.”

It was a “possibility” that the attack was carried out by New People’s Army guerrillas.

Col. Roel Leyaley Lami-ing, Bukidnon police director, said that during the ambush, two vehicles of the convoy, one of which carried Salido, have maneuvered to a safe area, but the lead car of the 1st Bukidnon PMFC was pinned down by the assailants.

Reinforcement from the military and nearby police teams were immediately deployed in the area.

Government troops have already launched pursuit operations against the perpetrators.

Lami-ing, meanwhile, vowed that they will pursue the attackers until they are put behind bars.

The Philippine National Police likewise condemned this “latest terrorist attack” by the NPA.

“Such actions aptly describe President Rodrigo Duterte’s observation of the CPP (Communist Party of the Philippines)-NPA that ‘for 53 years now, they haven’t done anything but to pull the country down,’” Banac said.