No Senate stand yet on VFA abrogation 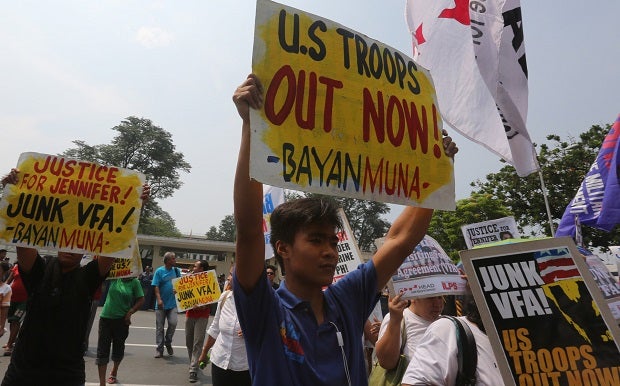 MANILA, Philippines— The Senate, as a body,  has  no stand  yet on the government’s plan to scrap the Visiting  Forces  Agreement (VFA) with the United States.

In fact,   even Senate President  Vicente “Tito” Sotto III  opted  to keep to himself his opinion on the issue,  citing  the separation of powers  among  the executive, legislative and  judiciary.

“Meron akong sariling opinion dyan pero (I have my own opinion but) I don’t want to  preempt the opinion of my colleagues first and the unified Senate’s stand on the matter or opinion on the matter,”  Sotto said told reporters on Monday.

(That’s his own opinion. His own opinion,  that’s his strategy…I would retain  the separation of the three—legislative, executive, and judiciary)

“Diskarte ng executive yan (That’s the strategy of the executive). As  Senate President I’d rather not indulge into saying whether that is right or wrong,” he added.

This does not mean however that other senators could not air their opinion on the issue, the Senate leader said.

“Pero (But)  there’s no Senate stand  on the matter as a body and as Senate President, I’d rather keep to myself muna (now) at this point,”  he  pointed out.

Sotto said the chamber could  still come  up later  with a united stand —either  through a  simple statement or  a resolution but only to express  its sense on the VFA abrogation.

But it would be  better also  if the US  would first find out Duterte’s perspective why he reached the decision to just terminate the agreement.

Sotto believes that the President’s threat to scrap the VFA  was not only because of the cancellation of  Senator Ronald “Bato” dela  Rosa’s US visa but was triggered by other issues,  including the many accusations by some American senators against the Duterte administration.

As then police chief,   Dela Rosa led the government’s bloody war on drugs that resulted in the deaths of thousands of drug suspects.