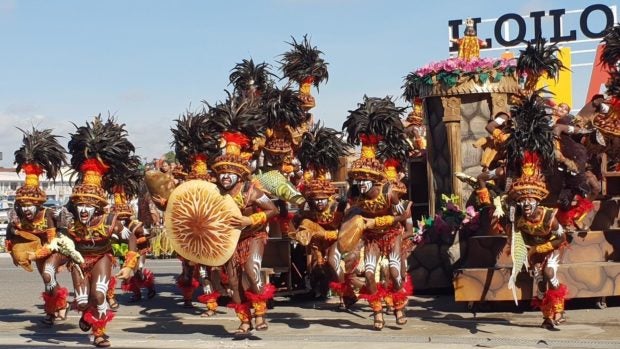 The group received some P5 million in cash and school projects and also won three minor awards—Best in Music, Best in Choreography and Best in Performance.

Tribu Ilonganon won in Best in Sadsad and Best in Costume Design and Headdress awards.

Eight groups competed in the event which was reoriented this year to a “360-degree” audience to provide spectators a better view.

Tens of thousands of tourists, revelers and devotees of Señor Sto. Niño packed the streets and four judging areas along the city’s main streets.

The groups awed their audience with colorful costumes, brisk movements and formations including costume changes incorporated in the sequences.

There were fewer props and smaller mobile platforms and panels compared to previous years but the performances still drew applause and cheers.

The festival, held every fourth weekend of the January, is among those held in honor of the Child Jesus Sto. Niño.

The President has not attended the festival, considered the biggest in Panay, since he came to office in July 2016.

Avanceña who has relatives in Iloilo arrived near the middle of the competition and was welcomed by Iloilo City Mayor Jerry Treñas, Iloilo Gov. Arthur Defensor Jr. and other officials.

She gave a brief message citing the resilience of Filipinos amid catastrophes including the eruption of Taal Volcano.

Near the end of her speech, she acknowledge Sen. Franklin Drilon, an Ilonggo and his wife Mila, and Sen. Risa Hontiveros who were also guests at the Iloilo Freedom Grandstand, the main judging area of the competition.

She later shook hands with Drilon after her speech.

Drilon and Hontiveros are leaders of the opposition Liberal Party.

Thousands also watched and joined the “Dagyang sa Calle Real,” the street-dancing along Iznart and J.M. Basa Streets where the Art Deco buildings were illuminated with bright colorful lights.

“From a simple and plainly religious event, Dinagyang Festival has evolved into a flamboyant, colorful and jovial religious and cultural celebration in honor of our patron saint, Señor Sto. Niño,” Treñas said in a speech during the opening program.

“Celebrating the Dinagyang Festival is our way of showing gratitude to the Almighty for all the blessings that we have received in the past year, whether personal achievements or those of our humble city,” he said.