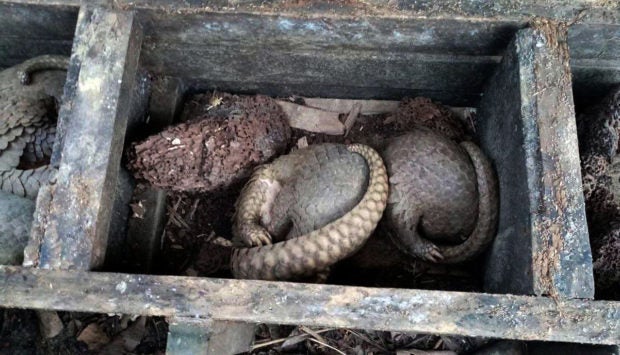 Two wildlife rescues – one in Palawan and another in South Cotabato – saved pangolins, spiny anteaters, birds and a tarsier.

Twenty live pangolins (Manis culionensis) were recovered from a “notorious” wildlife trafficker on Saturday in El Nido town, Palawan province, authorities reported on Sunday. In Koronadal City, South Cotabato, a villager rescued an adult male tarsier that found its way into the hands of children in a remote village.

Dubbed the “most-trafficked wildlife in the world,” the pangolins were about to be picked up in El Nido’s Barangay Pasadeña by a certain “financier” on a boat coming that same day from Quezon town in southern Palawan, according to Voltaire de los Angeles, forest technician and team leader of Community Environment and Natural Resources Office-Quick Response Team (Cenro-QRT) Taytay.

The suspect, Wilter Tenorio, 33, bought the pangolins from trappers and catchers in northern Palawan towns, including El Nido, Taytay, and Roxas.

“[Tenorio] is really notorious for his illegal deeds in El Nido, using different aliases. During our last operation [in Cadlao] regarding cut trees, he also resisted arrest and escaped,” De los Angeles said.

Tenorio has been transferring the pangolins in hidden wooden crates to cover his tracks, moving from one place to another before his arrest.

Recovered from him were transaction receipts and a mobile phone containing text messages among people involved in the wildlife trafficking operation.

Also found were spiny anteaters and birds, which were turned over to the Palawan Council for Sustainable Development (PCSD).

Tenorio faces charges of violating Republic Act No. 9147, or the Philippine Wildlife Act.

The Philippine pangolin faces an “extremely high risk of extinction.” The International Union for Conservation of Nature Red List of Threatened Species reclassified it as a critically endangered species in December 2019.

In Koronadal, Sabdullah C. Abubacar, executive director of the DENR in Soccsksargen (South Cotabato, Cotabato City, Sultan Kudarat, Sarangani, and General Santos City) region, said the tarsier was rescued from the children by Arnel Alvarez, a resident of Barangay Assumption, on Jan. 23.

“I saw kids in Sitio Elalam playing with the tarsier,” Alvarez told environment officials. “Aware it is a tarsier, I brought the small [animal] to the DENR.”

Abubacar lauded Alvarez’s action and the immediate response of DENR personnel. “The protection and conservation of wildlife species is among our priorities,” he said.

The tarsier was about 12 centimeters tall and weighed 160 grams.

Released to the wild

Since the primate appeared to be in good health, environmental personnel led by Alvarez and village officials released it back to the wild.

The tarsier is on the list of vulnerable and threatened wildlife species, according to Forester Mangayao Macapodi, chief of the DENR-12 Protected Area Management and Biodiversity Conservation Section.

Macapodi said the discovery of the adult tarsier in Assumption and another one in Barangay Linan in Tupi, South Cotabato, recently showed that the province had been home to some of these endangered species.

The DENR plans to conduct an information and education campaign in Assumption to strengthen people’s awareness of the importance of biodiversity.

Macapodi appealed to local officials and the villagers not to capture any wildlife species.

“Let the wildlife live in their natural habitat. If they are harmed or injured, immediately turn them over to the nearest DENR office to ensure their well-being and protection,” Macapodi said. INQ