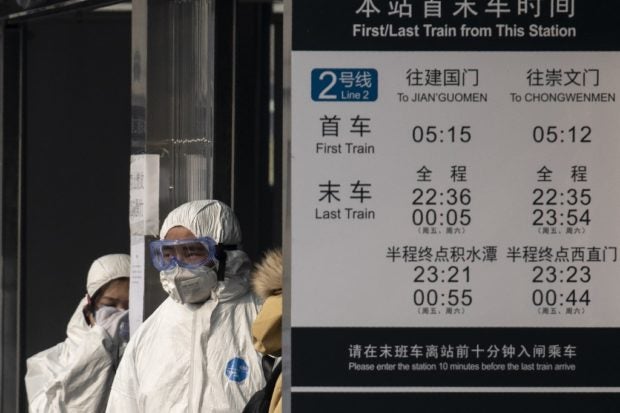 Security personnel wearing protective clothing to help stop the spread of a deadly virus which began in Wuhan, stand at a subway station in Beijing on January 26, 2020. – China on January 26 expanded drastic travel restrictions to contain a viral epidemic that has killed 56 people and infected nearly 2,000, as the United States, France and Japan prepared to evacuate their citizens from a quarantined city at the outbreak’s epicenter. (Photo by NOEL CELIS / AFP)

SHANGHAI — The animal-borne SARS virus 17 years ago was supposed to be a wake-up call about consuming wildlife as food, but scientists say China’s latest epidemic indicates that the practice remains widespread and a growing risk to human health. Like SARS (Severe Acute Respiratory Syndrome), which was traced to bats and civets, the virus that has killed dozens in China and infected almost 2,000 people is believed to have originated in animals trafficked for food.

Final findings are yet to be announced, but Chinese health officials believe it came from wildlife sold illegally at a meat market in the central city of Wuhan that offered everything from rats to wolf puppies and giant salamanders.

The so-called bush meat trade, plus broader human encroachment on wild habitats, is bringing us into ever-closer contact with animal viruses that can spread rapidly in our uber-connected world, said Peter Daszak, president of EcoHealth Alliance, a global nongovernmental organization focused on infectious disease prevention.

The Global Virome Project, a worldwide effort to increase preparedness for pandemics, which Daszak is a part of, estimates there are 1.7 million undiscovered viruses in wildlife, nearly half of which could be harmful to humans.

Daszak said the project’s research indicates we can expect around five new animal-borne pathogens to infect humanity each year.

“The new normal is that pandemics are going to happen more frequently,” he said.

“We are making contact with animals that carry these viruses more, and more, and more.” Viruses are a natural part of the environment, and not all are the stuff of sci-fi horror.

But the recent track record of animal-hosted viruses that “jump” to humans is sobering.

Like SARS, which killed hundreds in China and Hong Kong in 2002-03, Ebola also was traced to bats, while HIV has roots in African primates.

Even familiar menu items like poultry and cattle—whose pathogens we have largely adapted to over millenniums—occasionally throw a curve ball, like bird flu or mad-cow disease.

“For the sake of these wild species’ future, and for human health, we need to reduce consumption of these wild animals,” said Diana Bell, a wildlife disease and conservation biologist at the University of East Anglia who has studied SARS, Ebola and other pathogens. “But, 17 years on (from SARS), apparently that hasn’t happened.”

Wild-meat consumption itself is not necessarily dangerous—most viruses die once their host is killed.