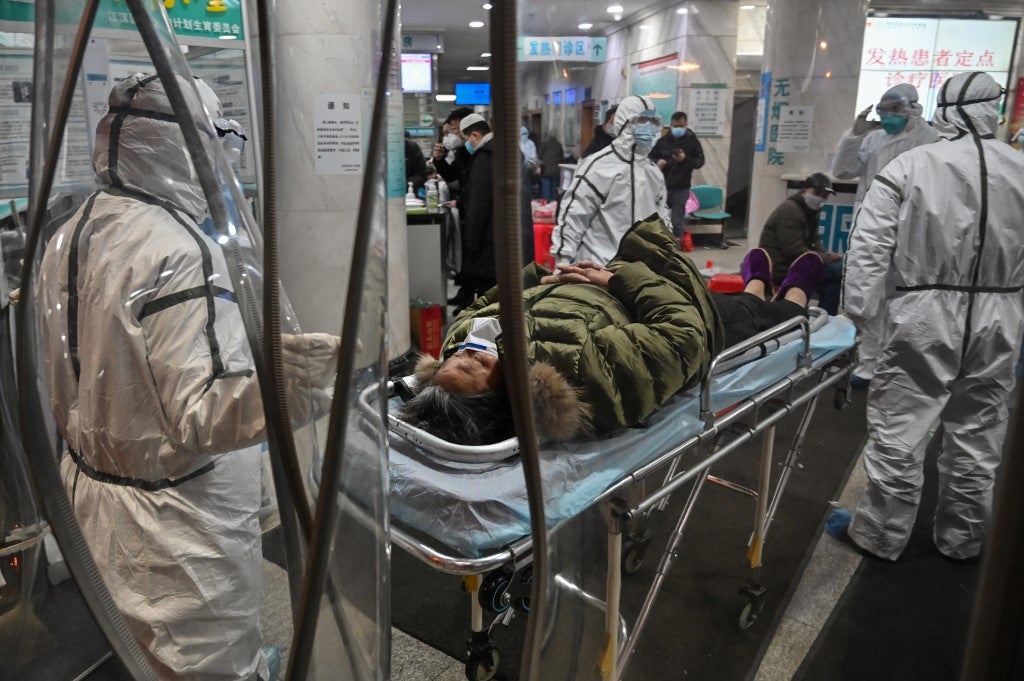 Medical staff members wearing protective clothing to help stop the spread of a deadly virus which began in the city, arrive with a patient at the Wuhan Red Cross Hospital in Wuhan on January 25, 2020. (Photo by Hector RETAMAL / AFP)

WUHAN, China (UPDATED) — The death toll from a virus in China has risen to 56 and the number of people infected across the country is nearing 2,000, authorities said Sunday.

Fifteen more people have died and at least 688 new cases of the coronavirus have now been confirmed, according to the National Health Commission.

Among the new deaths, 13 were in Hubei, the province at the heart of the outbreak, while Shanghai reported its first death.

At least 52 people have now died in total in Hubei, two in central Henan province, one in Heilongjiang in the northeast and one in Hebei in the north.

The contagion remained centred on the Hubei provincial capital of Wuhan, which accounted for seven of the new deaths and 46 of the new confirmed cases, said the Hubei Health Commission.

Wuhan and more than a dozen other cities in the province have been locked down in a rapidly expanding quarantine effort marked by transport shutdowns and other restrictions on movement.

The previously unknown virus has caused global concern because of its similarity to the SARS (Severe Acute Respiratory Syndrome) pathogen, which killed hundreds across mainland China and Hong Kong in 2002-2003.

It also has struck at possibly the worst time for China, when hundreds of millions of people are travelling across the country or overseas to celebrate the Lunar New Year holiday, China’s most important festival.

Hundreds of military doctors have been sent to Hubei and authorities are rushing to build a pair of field hospitals to deal with the crisis as patients swamp local medical facilities.

The virus has spread nationwide in China and cases have been reported in several other countries as far away as the United States, France and Australia.