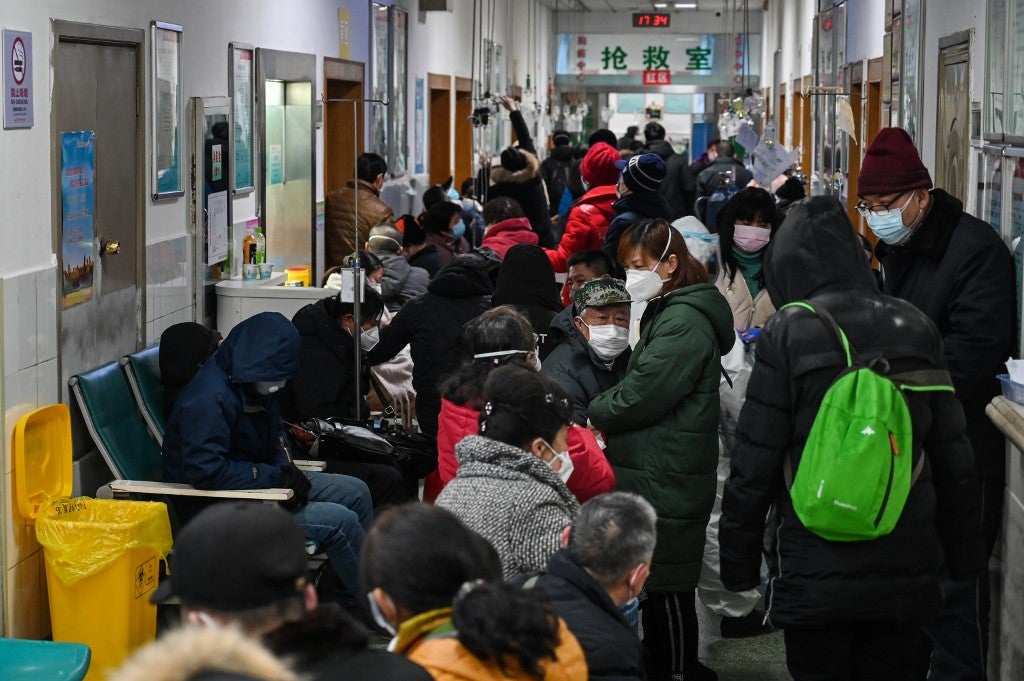 People wearing facemasks to help stop the spread of a deadly virus which began in the city, wait for medical attention at Wuhan Red Cross Hospital in Wuhan on January 25, 2020. – The Chinese army deployed medical specialists on January 25 to the epicentre of a spiralling viral outbreak that has killed 41 people and spread around the world, as millions spent their normally festive Lunar New Year holiday under lockdown. (Photo by Hector RETAMAL / AFP)

The world’s most populous country, which is scrambling to contain the disease that has infected nearly 1,300 people and overwhelmed health facilities, is building a second field hospital and closing more travel routes.

After more countries reported cases, Xi said at a Communist Party leadership meeting on the disease that China was “faced with the grave situation of an accelerating spread of the new coronavirus” but that the country will “definitely be able to win the battle,” according to state media.

Meanwhile China’s most important celebration has been all but cancelled for at least 56 million people as authorities expanded travel bans across central Hubei province to try and contain the spread of the virus.

In Wuhan, the epicentre of the emergency, 450 military medics were deployed to help treat patients in Hubei’s capital city, where a seafood and live animal market has been identified as the centre of the outbreak.

On Saturday, when they should have been celebrating the New Year, people waiting at one hospital in the city were angry and frustrated.

“It takes at least five hours to see a doctor,” one woman, who didn’t want to be named, told AFP.

One man in his 30s said some people had to queue for two days. Many people had brought their own chairs for the wait.

They already started work Friday on the first new field hospital, which could be ready in just over a week.

The two hospitals would be similar in size to the temporary facility that was built to tackle SARS in Beijing in 2003, when 650 people died from the disease in the mainland and Hong Kong.

The city also plans to transform 24 general hospitals for temporary use to cope with the increasing number of patients, state media reported.

Army medics, who arrived on military aircraft late Friday, include doctors with experience combating SARS or Ebola who will be dispatched to hospitals that are reportedly short on beds due to a crush of infected patients and worried locals.

The virus has caused global concern because of its similarity to SARS (Severe Acute Respiratory Syndrome).

The new virus has now infected people nationwide and in nearly a dozen other countries.

On the eastern outskirts of Wuhan, police manning a roadblock turned away a handful of vehicles trying to exit the city.

“Nobody can leave,” an officer told AFP.

But the police allowed some medical workers who had gone home for the holidays to re-enter the city to help at crowded hospitals.

Trapped residents were stocking up on masks, gloves and disinfectant while car traffic will be severely restricted from Sunday.

The city has a shortage of medical supplies including goggles and masks, according to the official Xinhua news agency, which added that the government has shipped 14,000 protective suits and 110,000 pairs of gloves to Wuhan.

Foreign citizens were set to be evacuated from Wuhan within the next few days.

US coffee chain Starbucks said it would shut all its stores in Hubei during the Lunar New Year festival for “health safety”.

The government says most cases have been in Hubei and most of the deaths involved people who already suffered pre-existing health conditions.

Underscoring fears that the virus could spread further, overseas Chinese tour groups will be suspended from Monday while domestic trips have already been halted.

Beijing will suspend long-distance bus service entering and leaving the capital of 20 million people from Sunday due to “requirements of epidemic prevention and control,” the official People’s Daily newspaper reported.

The National Health Commission also ordered nationwide measures to detect and isolate people carrying the virus on planes, trains and buses across the country.

Xinhua said Saturday that temperature screening checkpoints have been set up in 387 railway stations across the country.

Meanwhile, tourists from Hubei in Haikou, capital of the island province of Hainan, were told by the city government they had to spend 14 days in a hotel for centralised medical observation, and were forbidden to leave.

Beijing’s Forbidden City, Shanghai Disneyland and a section of the Great Wall are among many attractions that have closed as a precaution. China’s box-office film earnings for Lunar New Year’s Eve on Friday were just one-tenth of last year’s as people shunned crowds.

Xi chaired a Communist Party leadership meeting which urged regional governments to make “the safety of the masses’ lives and their physical health a top priority”, state media said.

Xinhua said the Standing Committee agreed to set up a working group that would visit Hubei.

In Hong Kong, where five people have tested positive for the virus so far, city leader Carrie Lam declared the situation an “emergency” and schools, currently on holiday, will remain closed until February 17.

The World Health Organization on Thursday stopped short of declaring a global emergency, which would have prompted greater international cooperation, including possible trade and travel restrictions.