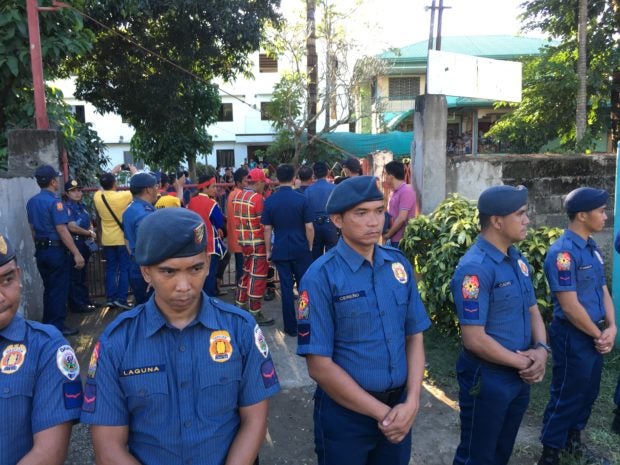 Police guard the gate of the UCCP Haran compound as Acting Mayor Sabastian Duterte negotiate with UCCP Haran officials and leaders with Lumad groups to allow the
Lumad evacuees to go home. The evacuees fled their homes because of threats to their lives. GERMELINA LACORTE

DAVAO CITY –– Tension has developed at the compound of the United Church of Christ in the Philippines (UCCP) Haran here when several people, some of them Lumad members of the paramilitary group Alamara, arrived at 9:20 a.m. and started to tear down the wall protecting the sanctuary area and entered the compound.

Jong Monzon, secretary-general of the Lumad group Pasaka, said the men were armed with bolos and started tearing down the walls and the gate of the compound where 500 Lumad from the neighboring towns of Cotabato, Davao del Norte, and Compostela Valley took refuge from what they said were military harassments in their villages.

Monzon said the Alamara, accompanied by men in civilian clothes “suspected” to be state agents, forcibly entered the evacuation site, prompting the evacuees to troop to the UCCP Haran’s main building for protection.

“They were bringing bolos and they hacked their way (into the evacuation site),” Monzon told the Inquirer in Cebuano.

The bolo-wielding men came 10 days after the Davao Regional Peace and Order Council (RPOC) here issued a resolution demanding the closure of the church compound, citing as basis violations of indigenous peoples (IP) rights allegedly committed inside the facility.

Earlier, Davao del Norte Governor Edwin Jubahib, who authored the resolution, said they would follow due process in closing the compound, and seek a dialog with UCCP Haran officials to ask the evacuees to return home.

The UCCP Haran compound has been known for taking indigenous Lumad evacuees since 1994 when a massive militarization forced residents in Talaingod town, Davao del Norte to flee.

Pasaka claimed that the removal of the Lumad from their ancestral land in Talaingod paved the way for the expansion of the Integrated Forest Management Agreement of the logging concessionaire Alcantara and Sons, inc. in Talaingod.

Since then, UCCP Haran has become a sanctuary for the beleaguered indigenous people all over the region fleeing militarization in their communities.

UCCP Haran houses 236 children and infants, most of them students of the center’s “bakwit school,” Monzon said.

“We are calling friends, network members, and fellow human rights defenders to help and speak out,” Pasaka said in a statement./lzb