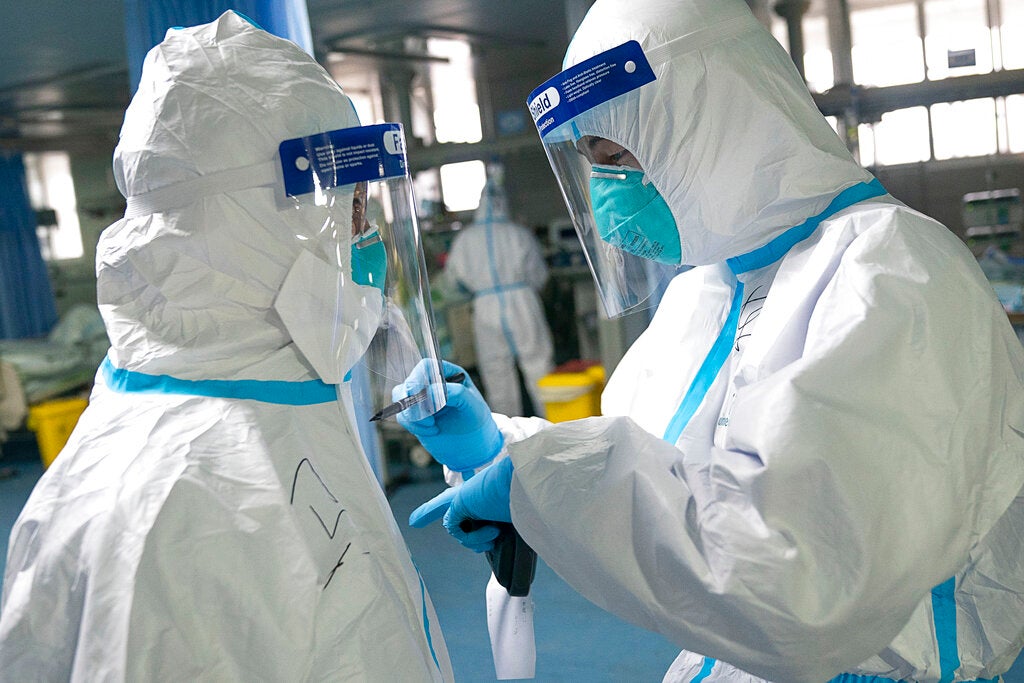 A medical worker writes their colleague’s name on a protective suit to aid in identification as they work at Zhongnan Hospital of Wuhan University in Wuhan in central China’s Hubei Province. (Xinhua via AP)

BEIJING — China expanded its lockdown against the deadly new virus to an unprecedented 36 million people and rushed to build a prefabricated, 1,000-bed hospital for victims Friday as the outbreak cast a pall over Lunar New Year, the country’s biggest, most festive holiday.

The number of confirmed cases around the world climbed sharply to more than 850, with at least 26 deaths, all of them in China.

Meanwhile, France announced that three people had fallen ill with the virus — the disease’s first appearance in Europe. And the United States reported its second case, involving a Chicago woman in her 60s who was hospitalized in isolation after returning from China.

On Wall Street, stocks slumped amid fears over the widening crisis, with the Dow Jones Industrial Average losing 170 points and the S&P 500 posting its worst day in three months. Health care companies suffered losses, along with financial institutions, airlines and other tourism and travel industry businesses.

Transportation was shut down in Wuhan, the city of 11 million at the epicenter of the outbreak, and in at least 12 other cities in central China’s Hubei province, encompassing a population bigger than that of New York, London, Paris and Moscow combined.

And authorities in Beijing and other cities canceled many public celebrations and other events marking Lunar New Year, which falls on Saturday.

Hospitals in Wuhan grappled with a flood of patients and a lack of supplies. Videos circulating online showed throngs of frantic people in masks lined up for examinations, and some complained that family members had been turned away at hospitals that were at capacity. 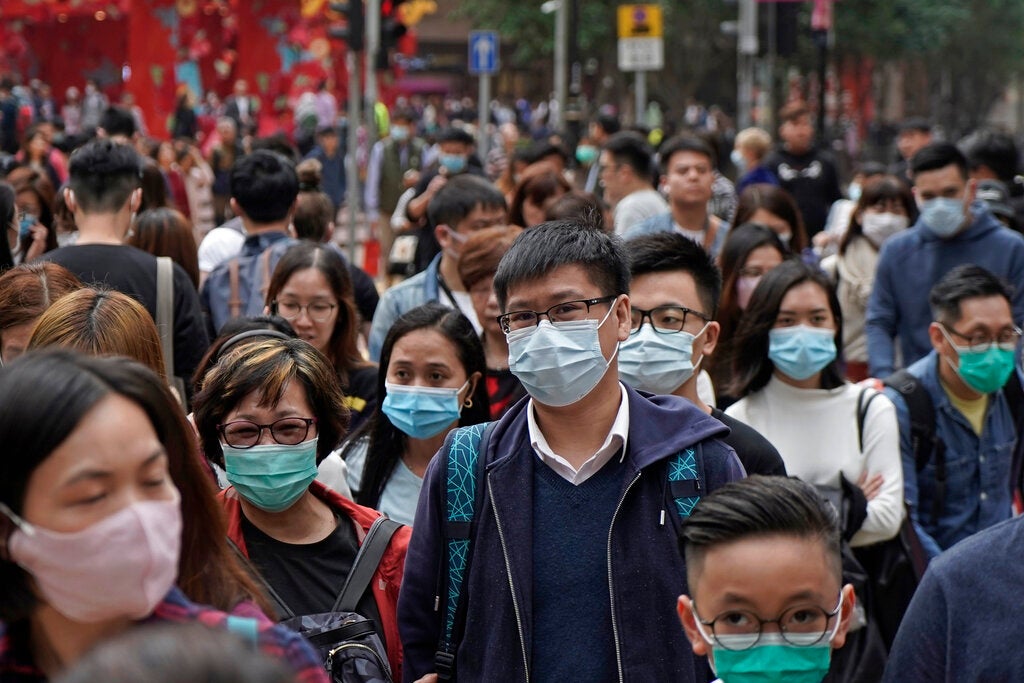 People wear masks on a street in Hong Kong on Friday to celebrate the Lunar New Year which marks the Year of the Rat in the Chinese zodiac.  (AP)

Authorities in Wuhan and elsewhere put out calls for medicine, disinfection equipment, masks, goggles, gowns and other protective gear.

Wuhan officials said they are rapidly constructing a new hospital to deal with the crisis, to be completed Feb. 3. It will be modeled on a SARS hospital that was built in Beijing in just six days during the SARS outbreak.

The seriousness of the crisis was still an open question.

The new virus comes from a large family of what are known as coronaviruses, some causing nothing worse than a cold.

But it is not clear just how lethal this coronavirus is, or even whether it is as dangerous as ordinary flu, which kills tens of thousands of people every year in the U.S. alone. Scientists say it is also not clear if it spreads as easily as SARS, its genetic cousin, which also originated in China and killed about 800 people in 2002-03.

The rapid increase in reported deaths and illnesses does not necessarily mean the crisis is getting worse. It could instead reflect better monitoring and reporting of the newly discovered virus, which can cause cold- and flu-like symptoms, including cough, fever and shortness of breath, but can worsen to pneumonia.

“It’s still too early to draw conclusions about how severe the virus is because at the beginning of any outbreak you would focus more on the severe cases,” said Tarik Jasarevic, a spokesman for the World Health Organization in Geneva. “And then maybe we are missing some mild cases because people will just be a little bit sick and will not have it tested. And they will recover.”

In France, Health Minister Agnes Buzyn said that two infected patients had traveled in China and that France should brace for more such cases. A third case was announced in a statement from her ministry about three hours later.

“We see how difficult it is in today’s world to close the frontiers. In reality, it’s not possible,” she said. Buzyn said authorities are seeking to reach anyone who might have come in contact with the patients: “It’s important to control the fire as quickly as possible.” 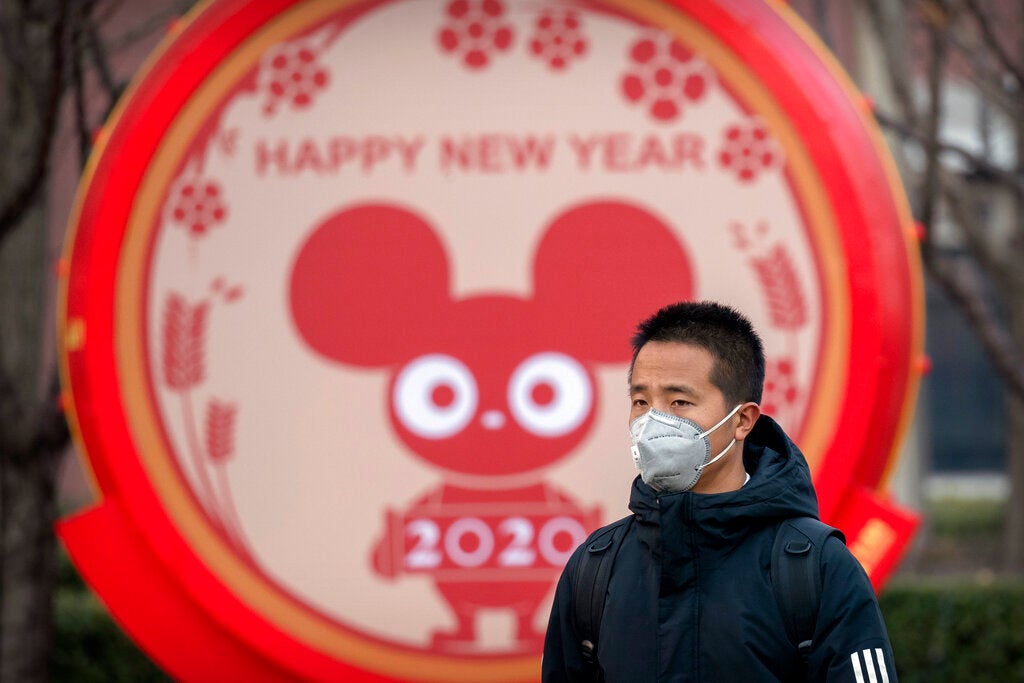 A man wears a face mask as he walks past a display for the upcoming Lunar New Year, the Year of the Rat, in Beijing on Wednesday. (AP)

In the U.S., the latest person confirmed to have the disease was reported to be doing well. The U.S. Centers for Disease Control and Prevention likewise said it is expecting more Americans to be diagnosed with the virus.

Still, “CDC believes that the immediate risk to the American public continues to be low at this time, but the situation continues to evolve rapidly,” said the agency’s Dr. Nancy Messonnier.

With Chinese authorities afraid that public gatherings will hasten the spread of the virus, the outbreak put a damper on Lunar New Year. Temples locked their doors, Beijing’s Forbidden City, Shanghai Disneyland and other major tourist destinations closed, and people canceled restaurant reservations ahead of the holiday, normally a time of family reunions, sightseeing trips, fireworks displays and other festivities in the country of 1.4 billion people.

Wuhan’s usually bustling streets, malls and other public spaces were unnervingly quiet on Day Two of its lockdown, and masks were mandatory in public. Shoppers emptied store shelves, stocking up for what could be an extended period of isolation. Karaoke bars, movie theaters and internet cafes around the region were shut down.

While most of the deaths have been older patients, a 36-year-old man in Hubei died on Thursday.

The vast majority of cases have been in and around Wuhan or involved people who visited the city or had personal connections to those infected. About two dozen cases in all have been confirmed outside mainland China, nearly all of them in Asia: Hong Kong, Macao, South Korea, Japan, Singapore, Thailand, Taiwan, Vietnam and Nepal.

Many countries are screening travelers from China and isolating anyone with symptoms.

Chinese officials have not said how long the shutdowns of the cities will last.

Recalling the government’s initial cover-up of SARS, many Chinese are suspicious of the case numbers reported by officials. Authorities have promised transparency.

China’s cabinet, the State Council, announced it will be collecting information on government departments that have failed in their response to the outbreak, including “delays, concealment and under-reporting of the epidemic.”

“Please believe in China,” the hosts said. “With the most transparent public information … on the battlefront of the epidemic, we will definitely win.” 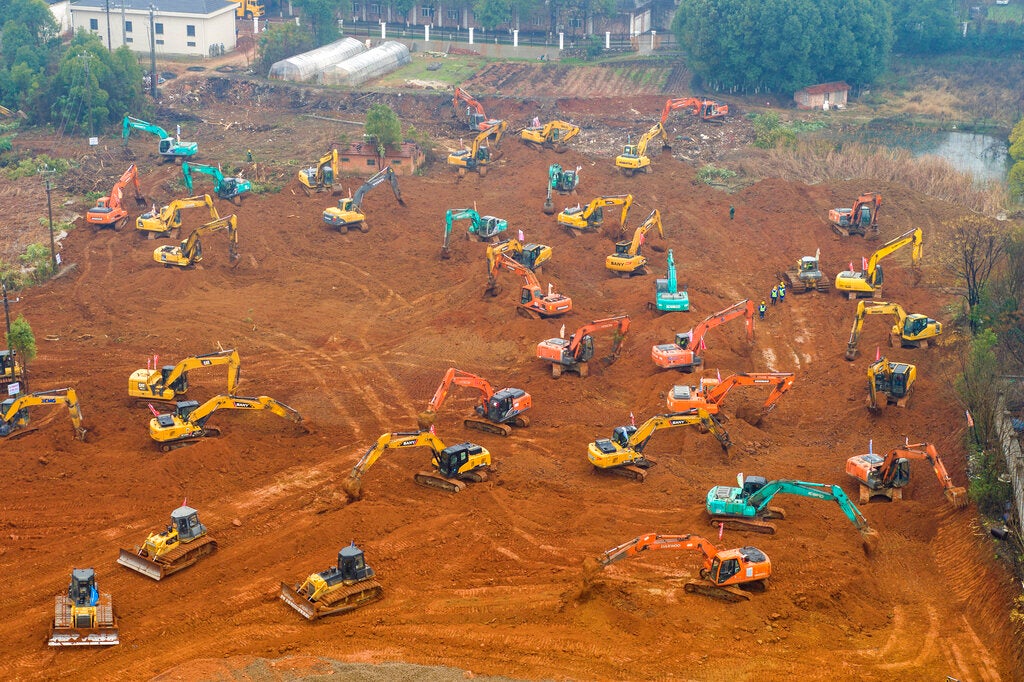 Heavy equipment works at a construction site for a field hospital in Wuhan in central China’s Hubei Province on Friday. (Chinatopix via AP)