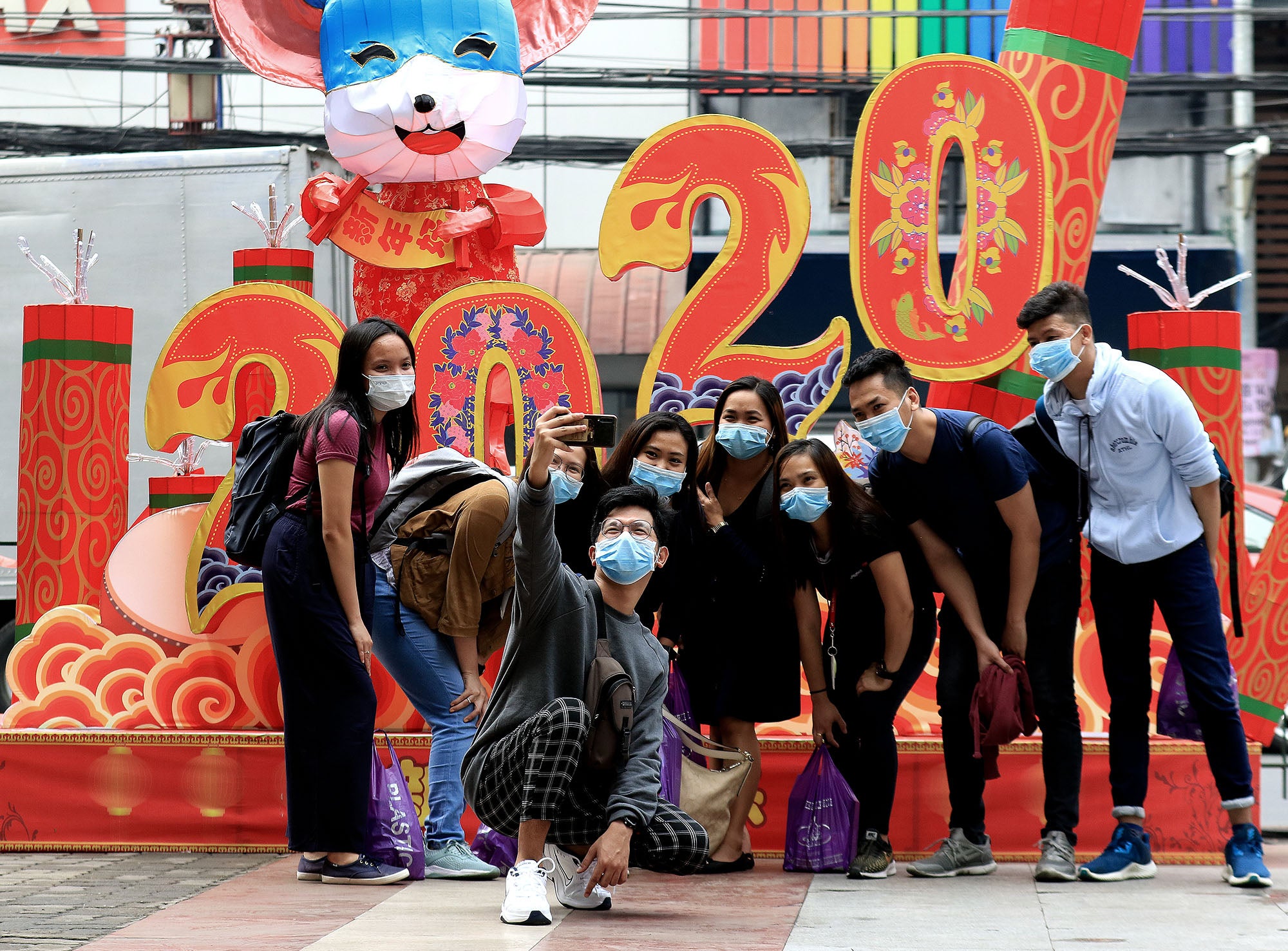 HIDDEN SMILES Friends wearing face masks amid the threat of a new coronavirus entering the Philippines take a stroll and pose for a selfie in Manila’s Chinatown on Friday, the eve of the Chinese New Year. —RICHARD A. REYES

The Year of the Metal Rat promises to be “exciting” for the Philippines, with both President Duterte and Vice President Leni Robredo expected to exhibit significant changes in their approach to governance and politics.

According to feng shui and Chinese astrology consultant Joey Yap, 2020 will likely see Mr. Duterte, who was voted as President in part due to his reputation as someone who quickly gets things done, using his “problem-solving skills to his advantage,” particularly in helping accelerate the country’s economic growth.

“Point to note is that he is at his Luck Pillar transition which signals a change in his overall style from problem-solving into economic-centric strategies,” said Yap of Mr. Duterte, a Rooster born in 1945.

A cause for concern, however, is the presence of “3 Peach Blossoms” in Mr. Duterte’s chart, and the interaction among the rat, rooster and rabbit “increases unwarranted attraction” toward Mr. Duterte “which would also likely create some scandals if not carefully managed,” said Yap, founder of the Mastery Academy of Chinese Metaphysics.

Robredo, meanwhile, is seen being infused with an “all-out-to-win type of energy” in the Year of the Metal Rat as she is “presented with the energy of Direct Wealth and 7 Killing.”

“We can see much bold strategies and decisions made and a much more hands-on approach toward public matters,” said Yap of Robredo, a Snake born in 1965.

“Overall, a rather interesting year for her, as we might see a great amount of efforts made to win,” he said.

As for the Philippines, Yap sees reasons to be optimistic that it will be a good year ahead.

The country’s chart indicates a “promising” growth outlook, due mainly to the promised acceleration in public spending.

The Philippines will also see “lots of fast-paced growth in infrastructure, such as roads, railway, airport, education and health sectors.”

“Technology sectors will see some challenges, but can be rectified through innovation,” said Yap, who also predicted an increase in the employment rate this year.

Overall, Yap said 2020 would be “exciting” for Filipinos who flourish despite demanding environments as some of the turmoil that marked 2019 would prevail this year.

“Everyone should stay on alert in the Year of the Metal Rat as it might just take you for a ride filled with bumps and sudden turns. Strategize well and plan ahead as opportunities might just crop up when you least expect it to. You should also work on broadening your current skill set to stay ahead of others. Keep in mind that your successes will be driven by your ability to adapt and innovate when faced with challenges, so this would be a great time to better yourself,” Yap said.

He added that the world might see 2020 as “lacking a sense of stability,” denoting “a wavering year.”

“Turbulence might be brewing behind the scenes despite what a country’s government might project to the world,” he said. There are also signs of a possible “manipulation” of the judiciary that would “lead to public angst.”

“Mass protests might increase in number, especially in areas where people do not have access to fundamental rights,” Yap told the Inquirer, but added that if conflict does occur, it would be short-lived due to the presence of the Nobleman Star.

To ward off the negative vibes that may visit 2020, Yap advised people to have clearly laid-out plans “before things hit the proverbial iceberg.”

“This is a good year to pad your savings to waylay disruptions and take advantage of opportunities others might avoid. Try to avoid engaging in speculative endeavors, as the global economic outlook is not that vibrant despite appearances. The Earth element, which represents appearances, is strong while the Metal element, which represents wealth, is weaker in 2020. This suggests that the economy only appears good on the surface level,” Yap said.

Read Next
Palace: US Senate move also made Duterte junk VFA
EDITORS' PICK
A delightful blessing!
Gov’t plans to open COVID-19 vaccination for 5- to 11-yr-olds by January 2022
Gov’t eyeing COVID-19 vaccine booster for essential workers, indigents by Dec. 10
Villar Group gears up for AllValue Shopping Party on Dec. 3; around P 1-million promos and discounts up for grabs
Omicron variant detected in more countries as scientists race to find answers
Legarda: Ending Violence Against Women, a cause for all
MOST READ
Quiboloy warns of ‘much worse than Omicron virus’ if his ‘persecution’ is not stopped
Suspected Omicron cases mild, says leading S. Africa doctor
Bongbong Marcos’ conviction in tax case not a crime involving moral turpitude — lawyer
Marcoleta defends pol ads on ABS-CBN
Don't miss out on the latest news and information.