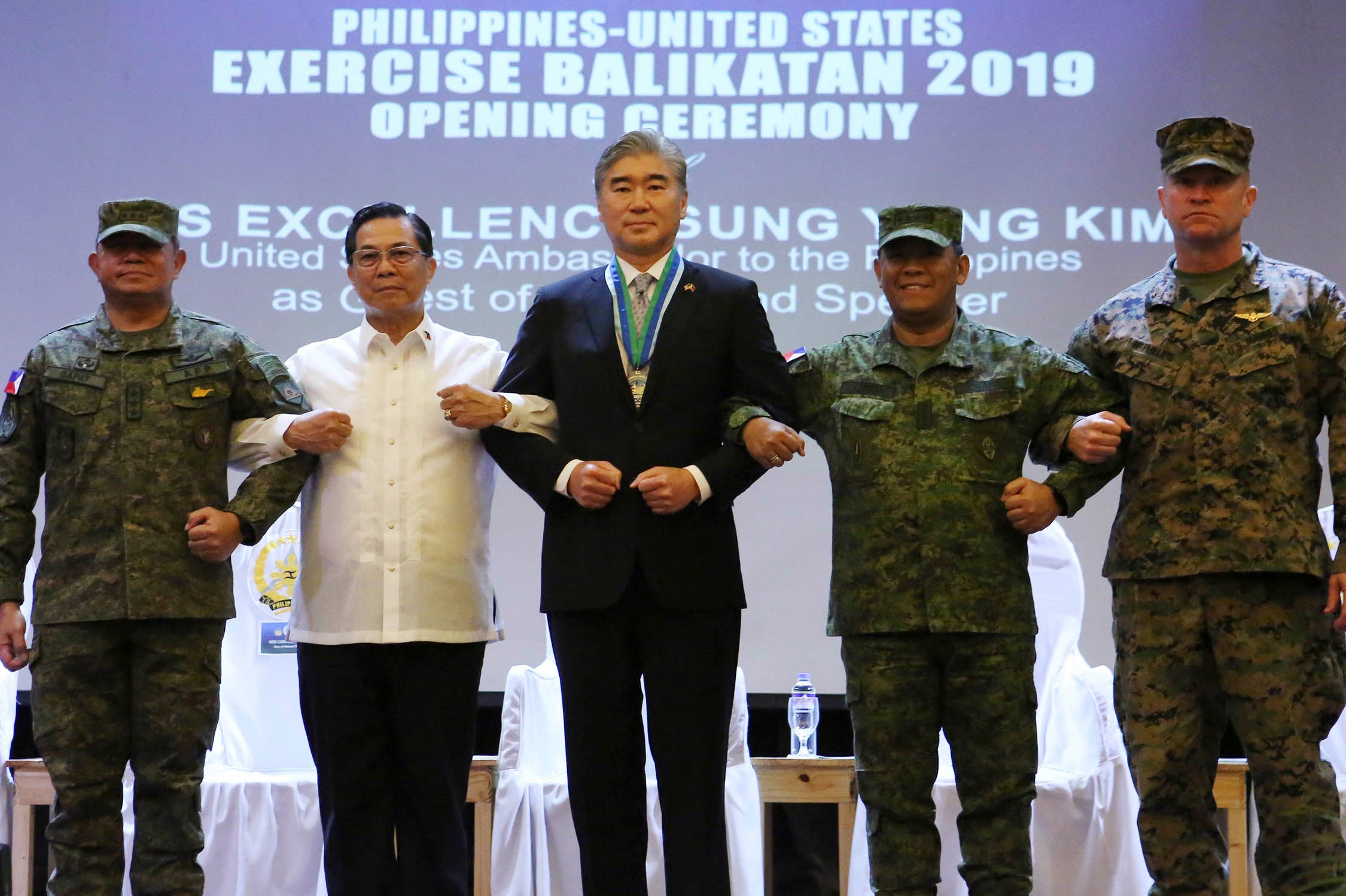 UNITED THEY STOOD. In this April 2019 photo, US ambassador Sung Kim(center) stands shoulder to shoulder with Philippine military and defense department officials, a scene that may no longer be repeated should President Duterte’s threat against the VFA be realized. —NIÑO JESUS ORBETA

President Duterte’s decision to terminate the Visiting Forces Agreement (VFA) with the United States was due to an “accumulation” of factors and not just the cancellation of the US visa of Sen. Ronald “Bato” dela Rosa, presidential spokesperson Salvador Panelo told reporters on Friday.

The President on Thursday threatened to terminate the VFA if the United States does not “correct” its cancellation of Dela Rosa’s 10-year multiple-entry US visa that expires in 2022.

Panelo cited the United States’ alleged “disrespect” of Philippine sovereignty when some of its senators demanded the release of opposition Sen. Leila de Lima, while imposing an entry ban on Filipino officials responsible for her detention.

The United States “cannot dictate or bully us into releasing a citizen of this country who is lawfully detained,” Panelo said.

Referring to a rider in the US national budget that bans certain Filipino officials, he said the amendment “was tantamount to a disrespect.”

“The President feels that we cannot [just] sit down and watch idly [by],” Panelo said.

Panelo acknowledged that the visa issue led to Mr. Duterte declining US President Donald Trump’s invitation to a summit with leaders of the Association of Southeast Asian Nations (Asean) in Las Vegas on March 14.

“[Mr. Duterte] said he’s not going, for many reasons, which I already stated earlier. And the other reason was the cancellation of Senator Bato’s visa,” Panelo said.

He added that the President was intent on starting the process of terminating the VFA immediately—“Tonight!” Panelo quoted Mr. Duterte as saying—instead of observing the one-month deadline he earlier gave the United States to restore Dela Rosa’s visa.

The Chief Executive was “authoritative, serious, and assertive” when he decided to end the treaty with the United States, he added.

Apart from governing US troops temporarily staying in the country, the VFA allows the US government to retain jurisdiction over its military personnel accused of committing crimes in the Philippines.

Signed in 1998 by the US and the Philippines, the agreement was ratified by the Philippine Senate in 1999. The ratification cleared the way for the resumption of joint military exercises following the closure of the US bases in Clark and Subic in 1991 and 1992, respectively.

Asked if the President can terminate the VFA on his own without the concurrence of Congress, Panelo explained that the issue was yet to be settled since there are two theories about it.

“Under the Constitution, the ratification of a treaty requires the concurrence of the Senate. That is why this VFA, considered to be a treaty, has the votes of the Senate. But the US considers this as an executive agreement … so the theory is, you can terminate it,” he said.

The Palace official, who described the current diplomatic relationship between the two longtime allies as “lukewarm,” however refused to comment if Manila would cut its diplomatic ties with Washington following the move to terminate the VFA.

US ambassador to Manila Sum King, Panelo said, has expressed his intention to meet with executive secretary Salvador Medialdea to discuss the President’s decision on the VFA.

“Either today or tomorrow, they will be meeting. Exciting,” he said.

Locsin, meanwhile, said the government was taking initial steps to end the VFA.

On his Twitter account, Locsin said he has called Lorenzana “ to start the process. “Step 1 [involves] calling the Senate foreign relations committee because on our side it is a treaty; on US side [an] executive agreement.”

In another tweet, Locsin said President Duterte has “the power to cancel Senate-ratified treaties unilaterally,” and that there is a view about Senate concurrence to ratify a treaty, but “none is required to terminate it, which is an entirely personal presidential power.”

The DFA chief described as a “good move” Duterte’s threat to abrogate the VFA over the US’ cancellation of Dela Rosa’s visa.

Locsin said Duterte’s threat would test the seriousness of the military alliance between Manila and Washington in the face of the demand of US senators for the release of Sen. Leila de Lima, who is currently undergoing trial for drug-related charges.

“Visas fall under US Justice Department in the Executive Branch. Either they’re serious about US-PH military alliance or not. They can have De Lima after her trial. In fact they can pass a law making her a US citizen and part of US military so she is covered by VFA,” Locsin said.

The defense department said it would wait for the US’ response to President Duterte’s threat on the VFA, even as this may impair joint military activities already lined up this year between the two countries.

“The ball is in the US hand. Let’s see how they react to PRRD’s statement,” Lorenzana said, adding that the cancellation of Dela Rosa’s visa was “a direct affront to PRRD, (Dela Rosa) being the architect of the drug war that he started upon assumption of office.”

A ranking government official, who spoke on condition of anonymity, said Mr. Duterte should have “calibrated” his statements, as his threat would cause some concern among neighboring countries.

“He should have spared the VFA because our neighbors will be alarmed, as they consider the US as a stabilizing force in the region,” the source said.

“China would love it,” the official added.

Also on Friday, Justice Secretary Menardo Guevarra said that, upon the President’s instructions, his office was currently conducting a study on how to properly terminate the VFA.

“We are doing it now,” he said in a brief message to reporters via Viber. —With a report by Melvin Gascon and Jerome Aning