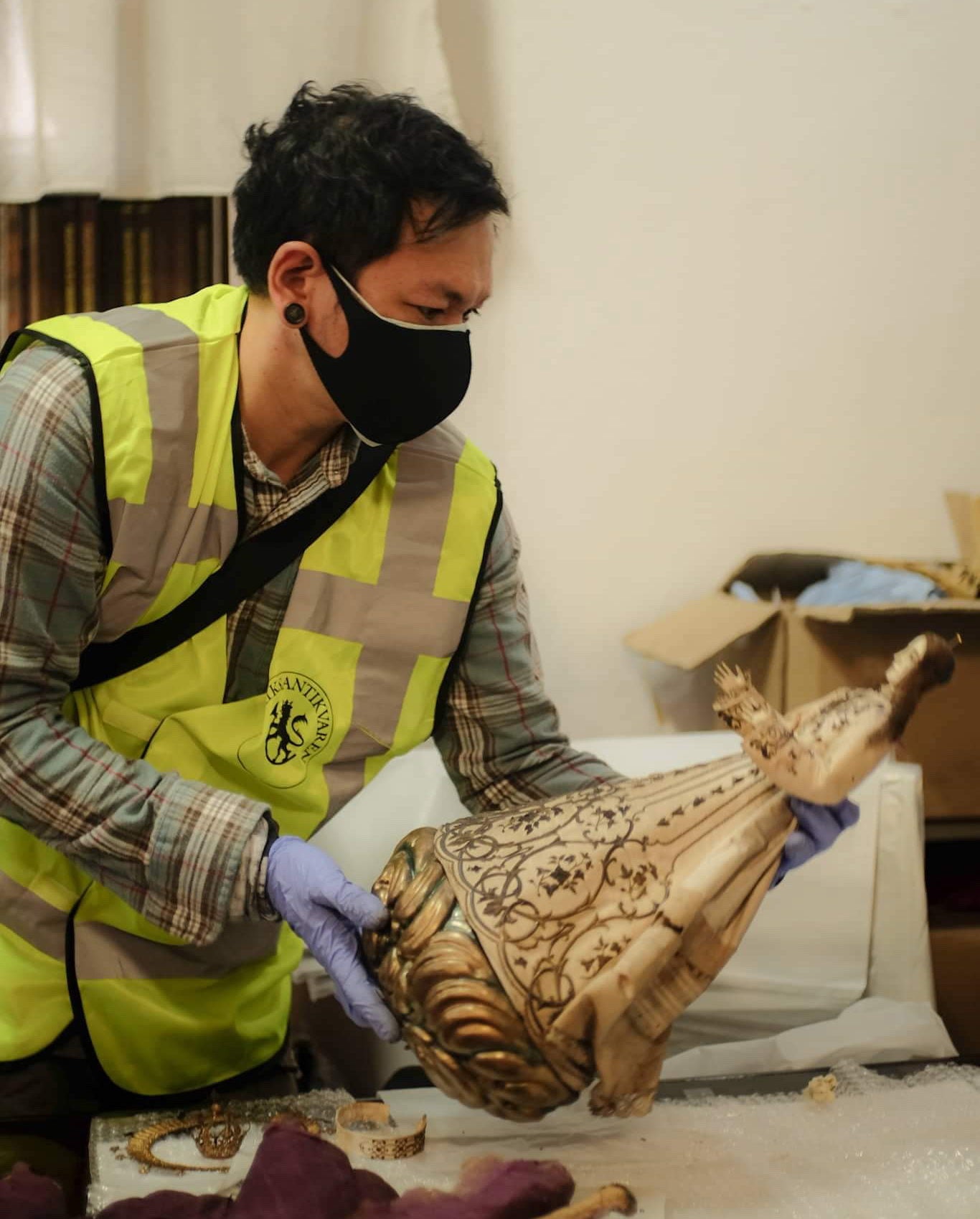 EVACUATION The National Historical Commission of the Philippines has secured artifacts from the Leon and Galicano Apacible Museumin Taal, Batangas—including an image of the Our Lady of the Holy Rosary—as the town and several others remain under threat of an explosive eruption of Taal Volcano. —ROMMEL AQUINO / CONTRIBUTOR

SAN PEDRO CITY—Multimillion-peso paintings of the artist Fernando Amorsolo and sets of precious jewelry have been “evacuated” to safety as Taal Volcano continued to threaten museums and cultural and religious sites with an explosive eruption that could wipe out entire towns in Batangas province.

Two museums—the Leon and Galicano Apacible and the Marcela and Felipe Agoncillo, both in the heritage town of Taal—were, as is the wintertime practice of most museums in Europe, “put to sleep,” the frames demounted and the pieces of antique furniture covered in fabric.

Windows and doors were shut in the hope of preserving the artifacts from not only volcanic ash but also looters, if any, as the local government enforced a total lockdown on the town.

“We’re a tropical country so we don’t normally do that here. In my 17 years [with the National Historical Commission of the Philippines or NHCP], it was only now that we did something like this,” said Rommel Aquino of the NHCP’s Materials Research Conservation Division.

“We were emotional [as we went through the process],” he added.

In Barangay Talaga, Tanauan City, the shrine and museum dedicated to the hero Apolinario Mabini was likewise shut down after authorities ordered communities to evacuate the 14-kilometer-radius hazard zone.

In Taal, with the volcano continuing to show signs of unrest, the NHCP also put up tarpaulins to “mark” about 20 old houses as government property.

Five Amorsolos, along with the “pamphlet” of the 1899 Constitution, which Don Leon Apacible helped draft back in the day, have been moved to the Jose Rizal Shrine in Calamba City, Laguna.

The NHCP made the quick transfer days after the “phreatic eruption” on Jan. 12, when the volcano spewed thick volcanic ash and drove close to a million people to evacuation centers.

“They survived hundreds of years, each with its own story to tell. What we’ve done was risky, but future generations also deserve to hear these [artifacts’] stories,” Aquino said.

Curators and NHCP personnel have been deployed elsewhere, such as the Museum of Gen. Miguel Malvar in Santo Tomas City, Batangas, or the Rizal Shrine, said Olga Palacay, curator of the Mabini museum.

There are still antique paintings and furniture left in the museum but these have been secured in the event of an earthquake, according to Palacay.

She said the museum had lost “thousands” of visitors as a result of the canceled tours. 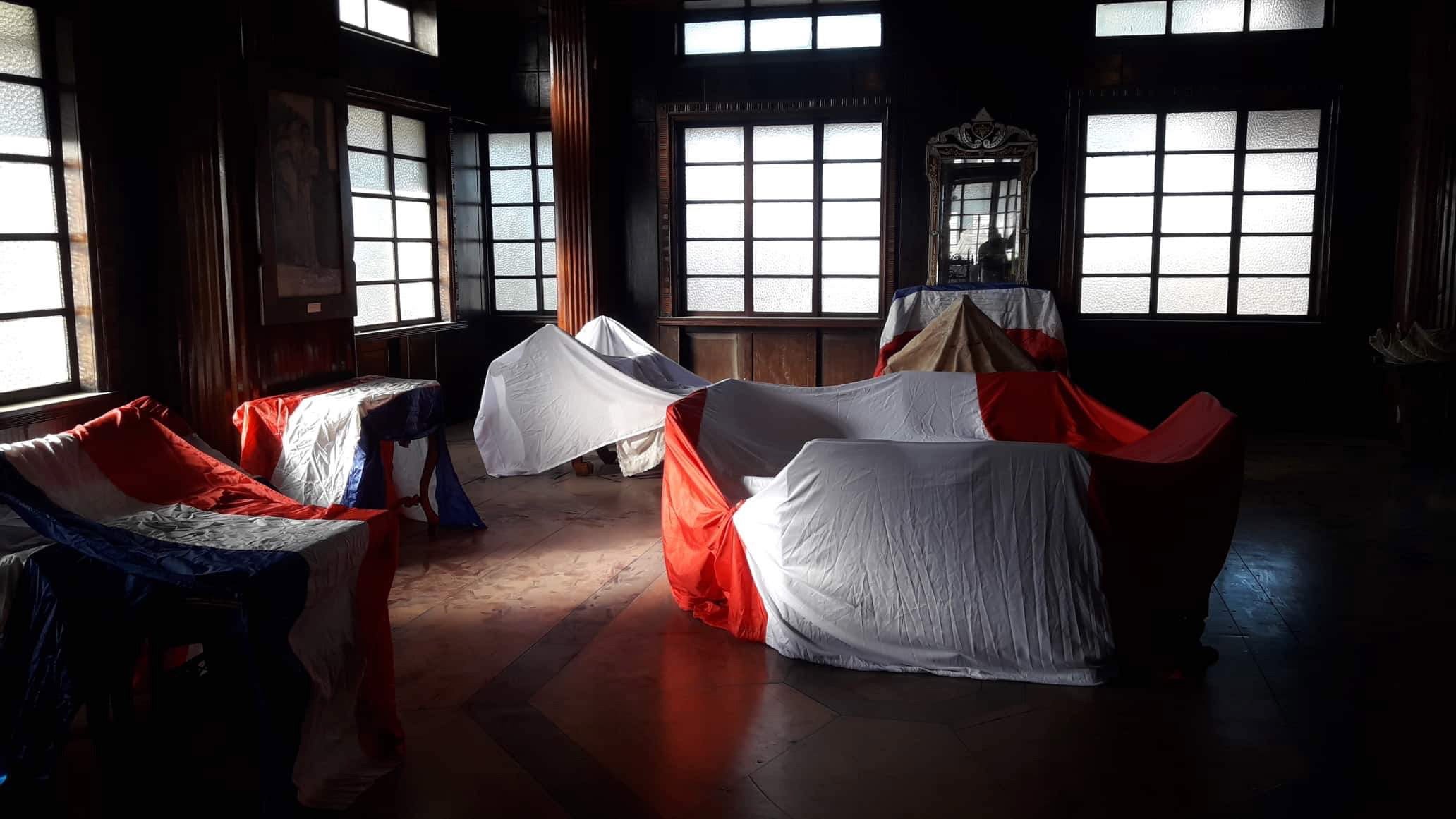 CULTURAL TREASURES SECURED As the government put several Batangas towns on lockdown, the Leon and Galicano Apacible Museumin Taal is shuttered and its precious displays are either moved to safety or protected from the elements. —ROMMEL AQUINO/CONTRIBUTOR

In the private Casa Corazon Resort and Museum at the border between the towns of Lemery and Calaca, which are inside and outside the hazard area, respectively, a number of vintage cars and motorcycles are still on display behind glass windows.

“They are concerned about the exotic birds that they have to feed regularly,” Reyes said. He said that since the caretakers were on the boundary of Lemery and Calaca, “they would just keep a motorcycle on standby in case a bigger eruption happens.”

Catholic churches in Batangas have also been serving as evacuation centers. The biggest ones are the famous Shrine of St. Padro Pio in Sto. Tomas City (with about 500 evacuees) and the Divina Pastora Parish in Lipa City (about 100).

Canonical books that hold important church records as well as antique vessels have been brought to safety to a parish in San Juan town.

“The first day [after the phreatic eruption], the parishes also opened the churches to evacuees, like the one in Talisay [town]. But they, too, had to move out when evacuation was enforced,” said Andrei Dimatulac of the Lipa Archdiocesan Social Action Commission.

Subsequent earthquakes left cracks on the facade of the Shrine of Our Lady of Caysasay in Taal and in the St. Roch Parish Church in Lemery.

Dimatulac said there were about 20 Catholic churches in the danger zone, whose priests had also moved to safe areas.

Aside from putting up relief and feeding missions, priests have been ordered by Lipa Archbishop Gilbert Garcera to continue to celebrate the Mass even in evacuation centers and to conduct the Liturgy of the Cross.

“The evacuees are allowed to touch the Holy Cross to make them feel [the presence of Christ] even in times of disaster,” Dimatulac said.