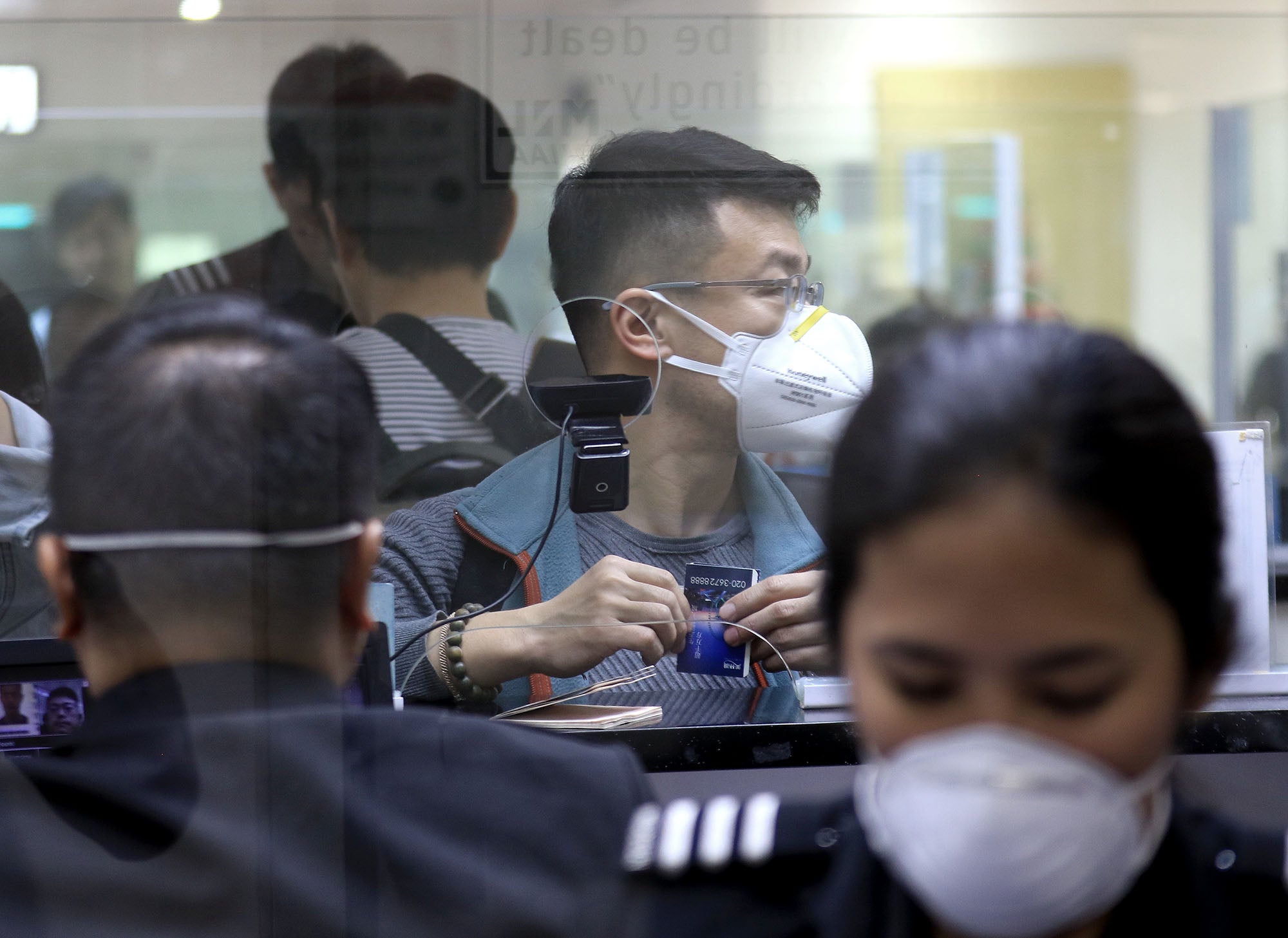 LINES OF DEFENSE Passengers arriving on international flights wear surgical masks as they face immigration officers at Ninoy Aquino International Airport Terminal 1 in Pasay City, where measures are in place to monitor possible carriers of the new and deadly coronavirus strain. —RICHARD A. REYES

Top health officials believe the new coronavirus that has already killed at least 17 people will continue to spread outside of China and they are preparing to contain it once it strikes the Philippines.

“It has already gone to several countries so that [the] idea of international spread is no longer theoretical,” Health Undersecretary Eric Domingo told a press briefing on Thursday.

“There is a confirmed case in the US, which is farther (from China) and supposedly has lower risk. There is higher risk within the Asian region,” he said.

Chinese authorities had confirmed 571 cases of the novel coronavirus, or 2019-nCoV, by the end of Wednesday. There was an earlier report of another 393 suspected cases.

Of eight known cases outside China, Thailand has confirmed four, while Japan, South Korea, Taiwan and the United States have reported one each.

“Realistically, the strategy now of WHO (World Health Organization) is really to make sure that when it does spread and when it happens, we’re able to isolate and contain the cases and manage them well,” said Domingo, who is also the spokesperson for the Department of Health (DOH).

Presidential spokesperson Salvador Panelo on Thursday said there was no need to bar travelers from the Chinese city of Wuhan, believed to be the ground zero of the infection, from the country.

“It has not reached an alarming level that we have to do some drastic measures like prohibiting people from entering, especially those suspected of having that kind of virus,” Panelo told reporters after talking to Health Secretary Francisco Duque III.

“He (Duque) said, not now. They don’t see the need for that right now.”

Carmelo Arcilla, executive director of the Civil Aeronautics Board (CAB), on Thursday said the CAB had suspended “indefinitely until further notice” all flights between Wuhan and all points in the Philippines.

“We will continue to monitor the situation with the DOH regarding the other cities in China,” Arcilla said.

He said the CAB had ordered airlines to implement the standard health procedures to screen passengers who could be carrying the virus.

Flight attendants are also advised to closely observe passengers who appear to be ill.Only two airlines—Pan Air and Royal Air—have direct flights between Kalibo in Aklan and Wuhan, which began last year. The last flight from Wuhan to Kalibo arrived on Thursday morning, and all passengers were determined to be healthy.

The Civil Aviation Authority of the Philippines and the Philippine Ports Authority also said they were implementing stricter screening of travelers in coordination with the DOH and the Bureau of Quarantine (BOQ).

“Please adopt all measures necessary and expedient to address the issue on coronavirus, considering world developments and the influx of passengers expected this Lunar New Year,” Transportation Secretary Arthur Tugade told the concerned agencies on Thursday.

Chinese health officials fear the transmission rate will accelerate as hundreds of millions of Chinese travel at home and abroad during weeklong holidays for the Lunar New Year, which begins on Saturday.

The Wuhan government on Thursday put the city of 11 million on lockdown, stopping flights and train services, and closing down highway toll booths, which would effectively cut off road exits. Guards were seen patrolling major highways.

Domingo said the move was welcome and reassuring.

“We are fully prepared and protocols are in place if ever cases of the new coronavirus reach the country. It’s just a matter of activating the infrastructure we have ready,” he said.If a case is confirmed, the DOH will proceed with guidelines it had followed during the SARS (Severe Acute Respiratory Syndrome) and MERS (Middle East Respiratory Syndrome) outbreaks several years ago, but “with modifications” to deal with the new virus, Domingo added.Health declaration cards

Domingo said Duque has ordered all passengers arriving on flights from China to fill out health declaration cards starting Friday. Passengers will be asked to disclose personal information, travel histories, health condition and other related information.

He said travelers would be tested and placed under observation if they had traveled to Wuhan, or worked at a hospital there, or had contact with anyone suspected to be infected with the virus, and if they showed symptoms of respiratory illness.

Domingo said the 5-year-old Chinese boy who arrived on Jan. 12 from Wuhan and was suspected of being infected with the new coronavirus was doing fine.

Test results from an Australian laboratory to confirm whether he had the 2019-nCoV were expected either on Friday or Saturday, he said.

Dr. Van Philip Baton, medical officer of the DOH in Central Visayas, said at a press briefing that the boy could soon be discharged from the hospital where he was taken for observation as he had no more symptoms associated with the new coronavirus.

Other people who came in contact with the boy, including health workers and the staff of the condominium where the child stayed for a few hours, also have not manifested any symptoms.

He also said the DOH had made contact with four family members of Hong Kong’s first suspected case of the virus.

All arrived on Wednesday and showed no symptoms of the disease. “But we are still closely monitoring them,” Domingo said.

Passengers and crew members of Cebu Pacific flight 5J-111 which carried the Chinese family were all screened and allowed to disembark because they showed no symptoms of illness, according to the airline.

“As a precautionary measure, we advise [them] to immediately seek medical attention should they exhibit flu-like symptoms, including runny nose, cough, sore throat or fever. We have also disinfected the aircraft following our standard practice for all inbound international flights,” the airline said.

Philippine Airlines spokesperson Cielo Villaluna said that although the airline does not operate flights to or from Wuhan, it was closely coordinating with the DOH and the BOQ and other health authorities “in taking sensible precautionary measures for the safety and protection of our passengers.”

The country’s biggest labor federation, Associated Labor Unions (ALU), on Thursday urged the government and the airline industry to ensure that not just passengers but also the cabin crew, check-in counter staff, immigration, security and maintenance employees were covered by safety and health protocols.

There is also a need to make sure that these workers have employment social protection insurance coverage in place and emergency health facilities are provided in case of contingencies amid the danger they face in performing their jobs, said Gerard Seno, ALU national executive vice president in a statement. —WITH REPORTS FROM JEROME ANING, KRIXIA SUBINGSUBING, JULIE M. AURELIO, DALE G. ISRAEL, MIGUEL R. CAMUS AND AFP