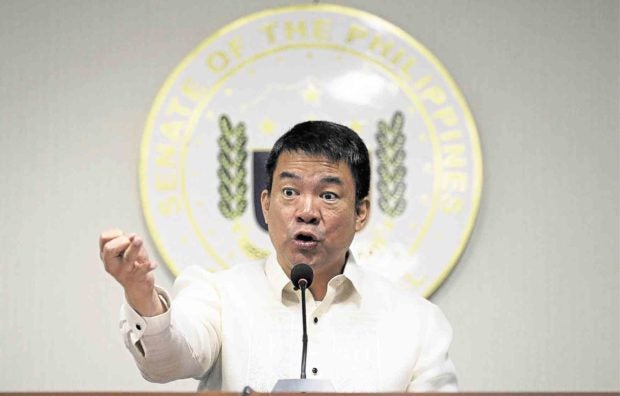 In filing Senate Resolution No. 287, Pimentel also urged the appropriate Senate committee to investigate such acts of Tham “for the purpose of reviewing our current laws in order to prevent a repeat of the same similarly minded individuals.”

Pimentel, in the resolution he filed on January 16, 2020, slammed Angkas over the staging of what he called a “mass ‘indignation’ ride by its drivers which was meant to paralyze traffic in Metro Manila.”

The senator claimed that the Angkas riders ”vehemently protested” the inclusion of other motorcycle-hailing firms in the government’s pilot study meant to asses the safety of bikes as a mode of public transport.

But the riders held their protest over the government’s decision to impose a 10,000-biker limit for each transport network company in the extended pilot run for motorcycle taxis, which would displace 17,000 of Angkas’ bikers.

The senator also claimed the ride-hailing firm “mounted another social media campaign aimed to shame government agencies by providing false and misleading information that seventeen thousand (17,000) riders will lose their jobs, thus affecting their families, when the truth is these riders may choose to be assimilated by the other motorcycle hailing apps.”

“Angkas riders, with the tacit approval of Angeline Xiwen Tham, have threatened to merely continue with their illegal acts, and remain colorum motorcycle taxis, if the alleged plan to displace 17,000 riders would be pursued by government,” Pimentel said.

The senator also said Tham owns P9.8 million in subscribed shares, or 99.996 percent of Angkas at its inception as recorded in the Securities and Exchange Commission (SEC).

Angkas’ chief transport advocate George Royeca had earlier said issues on ownership has already been rectified, with him now owning 60 percent of the company.

“Tham is merely a guest of our country, yet she is already acting like an oligarch which she seems hell-bent on becoming at our expense,” Pimentel’s resolution further read.

“Her acts of deriding our sovereign laws is high-handed, arrogant and irresponsible, which should not be countenanced but condemned to the fullest,” it added.

He defended his endorsement saying there was a need to diminish a climate of monopoly in the blossoming motorcycle ride-hailing industry.

This after Pimentel’s name cropped up when executives of JoyRide addressed allegations that came out in social media that he had extended a letter of the company to Transport Secretary Arthur Tugade to include its bid in the pilot test of motorcycle taxis.