VANCOUVER, British Columbia – Lawyers for a senior executive of Chinese tech giant Huawei argued Tuesday that allowing her extradition to the United States would result in Canada bowing to foreign law. 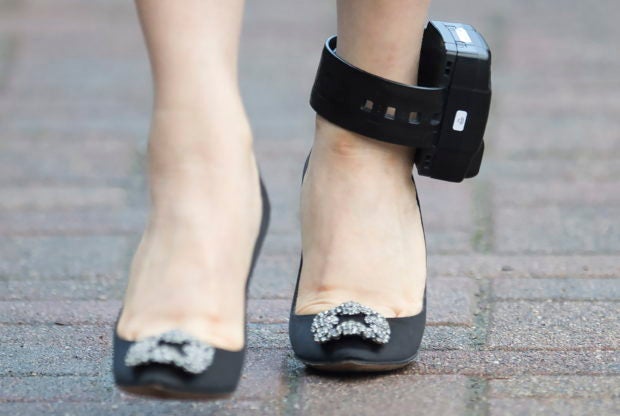 Meng Wanzhou, chief financial officer of Huawei wears an ankle monitor as she leaves her home to go to B.C. Supreme Court in Vancouver, Tuesday, January 21, 2020. Wanzhou is in court for hearings over an American request to extradite the executive of the Chinese telecom giant Huawei on fraud charges. (Jonathan Hayward/The Canadian Press via AP)

This week’s hearings deal with the question of whether the U.S. charges against Meng Wanzhou are crimes in Canada as well. Her lawyers argue the case is really about U.S. sanctions against Iran, not a fraud case. Canada does not have similar sanctions on Iran.

Canada’s arrest of Huawei’s chief financial officer, the daughter of the company’s founder, in late 2018 infuriated Beijing to the point it detained two Canadians in apparent retaliation.

The U.S. accuses Huawei of using a Hong Kong shell company to sell equipment to Iran in violation of U.S. sanctions. It says Meng, 47, committed fraud by misleading the HSBC bank about the company’s business dealings in Iran.

Meng, who is free on bail and living in one of the two Vancouver mansions she owns, sat next to the court interpreter. She listened the proceedings with her head down studying documents.

Meng denies the U.S. allegations. Her defense team says comments by President Donald Trump suggest the case against her is politically motivated.
Prosecutors say that Meng’s case is separate from the wider China-U.S. trade dispute, but Trump undercut that message weeks after her arrest when he said he would consider intervening in the case if it would help forge a trade deal with Beijing.

Huawei represents China’s progress in becoming a technological power and has been a subject of U.S. security concerns for years. Beijing views Meng’s case as an attempt to contain China’s rise.

Arguments will continue throughout the week.

The second phase, scheduled for June, will consider defense allegations that Canada Border Services, the Royal Canadian Mounted Police and the FBI violated Meng’s rights while collecting evidence before she was actually arrested.

In apparent retaliation for Meng’s arrest, China detained former Canadian diplomat Michael Kovrig and Canadian entrepreneur Michael Spavor. The two men have been denied access to lawyers and family and are being held in prison cells where the lights are kept on 24-hours-a-day.

Read Next
Prince Harry reunites with Meghan and Archie in Canada
EDITORS' PICK
Karding damage to infrastructure at P23M
Bongbong Marcos says PH ‘open for business’ with new Clark Airport terminal
Sierra Madre stands up to Karding, but needs protection vs the humans it saves
Reignite your passion with the vivo Y35
House energy committee chair Arroyo bats for cheap electricity
UNFPA Philippines Career Opportunities
MOST READ
Badoy not with Office of the President, NTF-Elcac, under Marcos admin — solon
Angelica Panganiban ‘duguan, sugatang mom’ one week into breastfeeding
LPA enters PAR, may develop into tropical depression
Charges readied vs gov’t guard with P290-M deposits
Don't miss out on the latest news and information.