Prince Harry reunites with Meghan and Archie in Canada

TORONTO – Prince Harry has reunited with his wife Meghan in Canada as he steps back from royal duties. 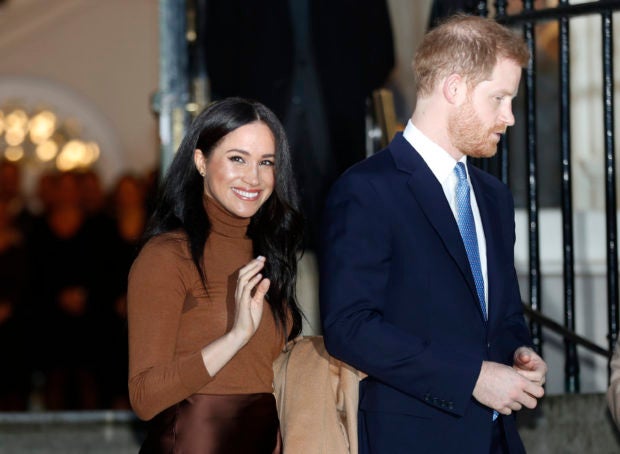 FILE – In this Jan. 7, 2020, file photo, Britain’s Prince Harry and Meghan, Duchess of Sussex leave after visiting Canada House in London, after their recent stay in Canada. Prince Harry and Meghan Markle are to no longer use their HRH titles and will repay £2.4 million of taxpayer’s money spent on renovating their Berkshire home, Buckingham Palace announced Saturday, Jan. 18. 2020. (AP Photo/Frank Augstein, File)

Video from Sky News shows Harry landing at Victoria’s airport on Vancouver Island late Monday. The prince, Meghan and their 8-month-old son Archie were reportedly staying at at mansion on the island off Canada’s Pacific coast. The video shows Harry stepping off a small passenger plane and getting into a SUV on the tarmac.

Buckingham Palace said Tuesday it would not comment on private matters.

The palace announced Saturday that the prince and his wife will give up public funding and try to become financially independent. The couple, who were named the Duke and Duchess of Sussex on their wedding day, are expected to spend most of their time in Canada while maintaining a home in England near Windsor Castle in an attempt to build a more peaceful life.

A photographer spotted a smiling Meghan on a hike with Archie and her two dogs, trailed by her security detail, on Vancouver Island on Monday. Lawyers for Meghan and Harry have issued a legal warning to U.K. media over the use of paparazzi photos. The BBC and Sky News reported that the photographs were taken by photographers hiding in the bushes and spying on her.

The couple spent the holiday season on the island, but it’s unclear where in Canada they will settle. Meghan worked for seven years in Toronto, where she filmed the TV series “Suits.”

It is also unclear who would pay for their personal security and what the immigration and tax status would be for the couple. Harry’s grandmother, the queen, is technically head of state in Canada, a Commonwealth nation.

Prime Minister Justin Trudeau has spoken warmly about Harry and Meghan, but has said there are questions to be addressed.

“Discussions are continuing and I have no update at this time,” Trudeau said Tuesday.

The country’s leading newspaper, The Globe and Mail, wrote in an editorial last week that senior royals were welcome to visit Canada but should not stay because a royal living in Canada does not accord with the longstanding nature of the relationship between Canada and Britain, and Canada and the Crown.

The paper said it would break an “unspoken constitutional taboo.” But The Globe and Mail published another editorial on Monday that said while a senior member of the Royal Family setting up shop in Canada “doesn’t accord with what Canada has become,” Harry is no longer a royal so the problem is solved.

Harry remains a prince but will not be a working royal.