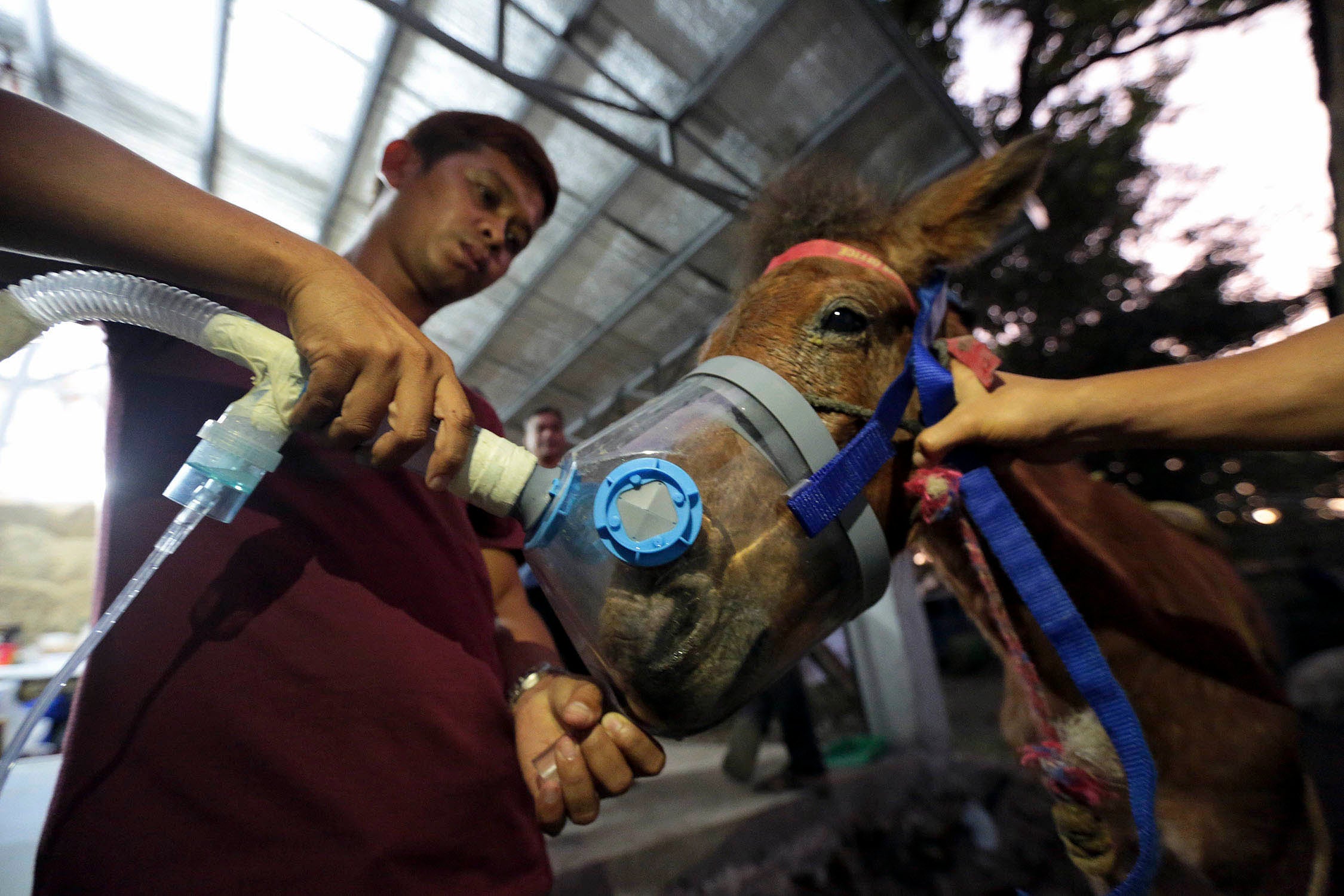 RESCUE AND RELIEF A horse, one among many that were rescued from Taal Volcano’s eruption and suffering from an upper respiratory ailment, is put on a nebulizer on Monday by veterinarian Jay Tolentino at the Department of Agriculture’s Emergency Livestock Rescue Center in Lipa City. —GRIG C.MONTEGRANDE

SAN PEDRO CITY, LAGUNA—After surviving the eruption of Taal Volcano, horses rescued from the Volcano Island may end up in slaughterhouses, as butchers dangle thousands of pesos before their disaster-stricken owners to get their hands on the animals.

Jay Tolentino, a volunteer veterinarians who takes care of rescued horses, on Tuesday asked the Department of Agriculture (DA) and private farm owners to make a “concerted” effort to buy the horses to save them from butchers who were taking advantage of the calamity.

Tolentino said the horse owners, most of them poor families who had lived and kept tourism alive on Volcano Island for many years, were left with few options as they faced eviction from the island.

“I told them (owners): ‘I understand you might want to sell the horses, especially now that tourism is dead and you can use the money to start anew,’” Tolentino said. “But maybe the government should make a counteroffer for the animals. I am also calling up my [private] clients for help.”

Consuming horse meat is not a common practice among Filipinos, but there is a small market for horse meat in Malabon, Metro Manila, Tolentino said.

He is currently looking after 55 horses rescued from Barangay Calawit, a village on Volcano Island in Balete town. He said nine of the horses had been sold by their owners, but veterinarians had refused to release the animals because they were still weak.

The horses, along with 80 cows and many goats, are housed in the DA’s animal shelter in Lipa City, Batangas.

About 50 other horses were taken to a private stable in Malvar, Batangas, and another 50 to Alfonso, Cavite. The horses were rescued by an animal welfare group from Volcano Island’s Talisay side in Batangas.

Two other horses were taken to a shelter in Tanauan City, also in Batangas.

Tolentino said the number of horses rescued after the Jan. 12 eruption of Taal was “not even close to half” of the horse population on Volcano Island.

Residents estimated there were 2,000 to 3,000 native horses, or Philippine pony, used to bring tourists to the viewing deck to see the volcano.

Tolentino said two of the horses were in “critical condition,” but he refused to put them down as they continued to show improvement over the past few days.

Many horses have scalded skin around the eyes or around the buttocks due to long exposure to volcanic ash. They also suffer from pneumonia and other complications.

Fewer injuries have been observed on cattle and goats.

Private animal welfare groups and volunteer veterinarians have been helping government agencies in an overwhelming situation to save animals on Volcano Island and those that residents have left in towns within the danger zone on the mainland.

In Batangas City, the office of the city veterinarian carried out a medical mission to treat about 40 dogs, 10 cats, four birds, and two rabbits, private veterinarian Aldrin Bisa said.

Tolentino said wealthy clients had been donating medicines, such as antibiotics and feed, for the rescued horses in Lipa, but support in other animal shelters had started to decline.

“Our [current] set up is chaotic [with the rescued animals scattered in different shelters]. It would have been easier [to bring help and medical attention] if it’s well coordinated,” he said.