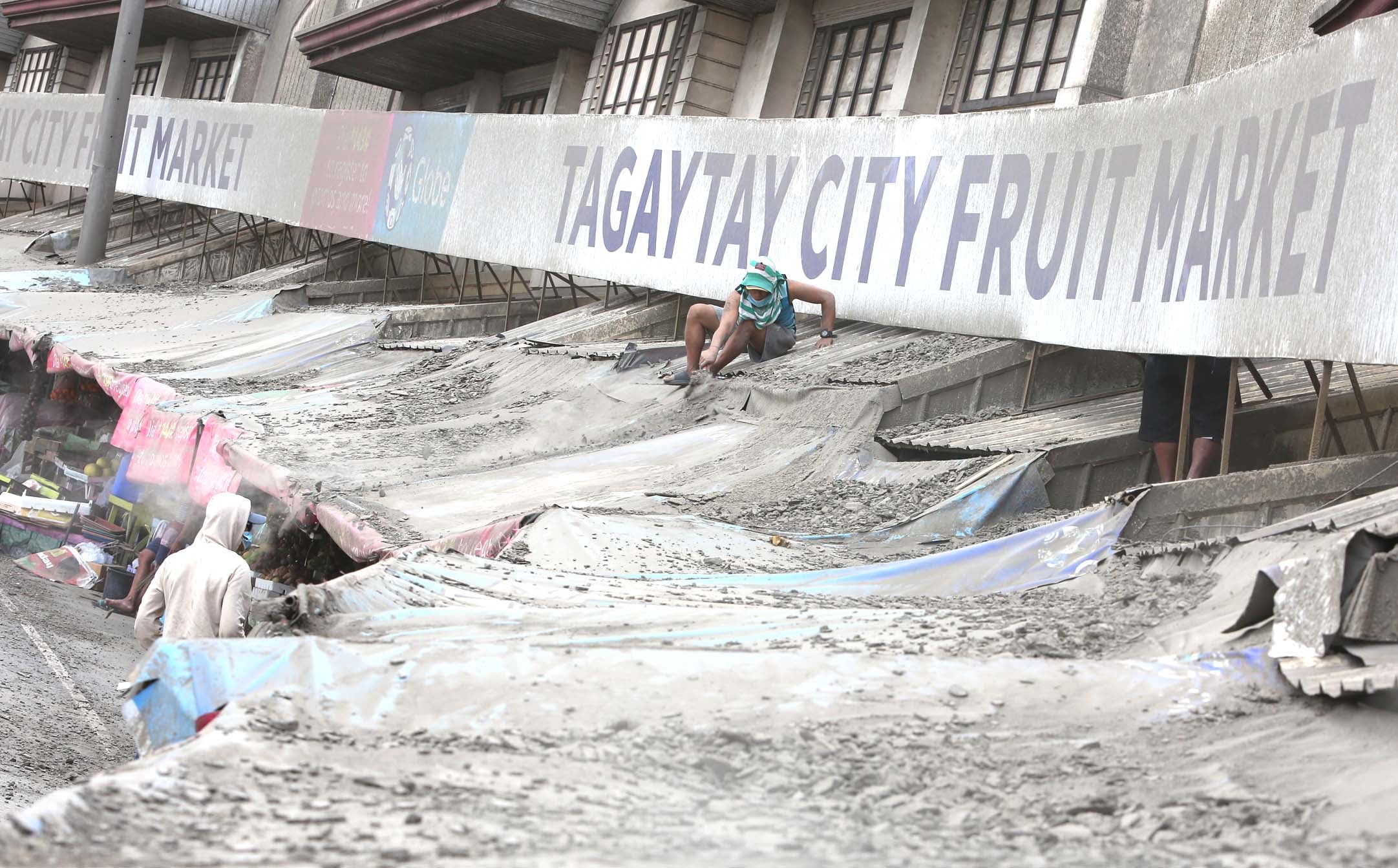 BUSINESS CLEANUP Business establishments in Tagaytay City start to clean and open up their space for tourists and visitors, a week after Taal Volcano’s eruption. —MARIANNE BERMUDEZ

Police and military patrols are searching towns within the danger zone in the Taal Volcano region for residents who refuse to heed the mandatory evacuation order, as scientists warn that the volcano may erupt any time.

Interior Secretary Eduardo Año on Tuesday said 98 percent of residents in areas within the 14-kilometer radius danger zone had been evacuated, but 2 percent were “hiding.”

“We are looking for the 2 percent,” Año said in a radio interview. “[Police and military mobile patrol groups are making] the rounds. At least these mobile patrol groups can flee easily if there is an explosive eruption, unlike stationary checkpoints, which, if the volcano spews lava, would surely be in danger.”

Año called on residents of the volcano region to abide by the lockdown order for their own safety. “Until alert level 4 is lifted, we will not gamble with the lives of our citizens,” he said.

The Philippine Institute of Volcanology and Seismology (Phivolcs) maintains alert level 4 on Taal, a notch below hazardous explosive eruption.

More than 235,000 people have been evacuated from Volcano Island and towns on the shores of Taal Lake since the volcano suddenly came to life on Jan. 12. They now jam hundreds of evacuation centers in Batangas, Cavite and Laguna provinces.

Until Monday, local governments had been struggling to keep the evacuees from going back to inspect their homes, fetch items and feed pets and livestock.

But as Phivolcs warned that the volcano, despite appearing to calm down, remained building up force for an eruption, Año ordered the mayors of the towns within the danger zone to stop the daily visits, and the police to protect homes against looters.

On Tuesday, Col. Edwin Quilates, the Batangas police chief, said entire forces of municipal stations were in the danger zone watching homes and stopping people from entering the towns.

Agoncillo Mayor Daniel Reyes said residents of the town were “angry” about the lockdown order, but “we do always try to explain to them [the danger of coming back].”

“This is really difficult for us in the [local governments. We are torn] between our constituents, whose concern [is the] livelihood they left behind, and the [national] government, whose concern is safety. But there’s an order [and] we have to follow,” San Nicolas Mayor Lester de Sagun said.

Talisay Mayor Charlie Natanuan appealed to President Duterte to “modify” Phivolcs’ assessment of Taal’s condition. He said residents should be allowed to go back home, as the volcano would no longer erupt, contrary to Phivolcs’ warning.

“It’s just right to ensure the safety [of the people],” Tolentino said.

At first, the towns placed on lockdown were Talisay, Agoncillo, Lemery and Laurel. Later, following the base surge map drawn up by Phivolcs, the Department of the Interior and Local Government (DILG) and the Batangas provincial government added San Nicolas, Alitagtag, Balete, Cuenca, Malvar, Santa Teresita, Taal and parts of Mataas na Kahoy and the cities of Lipa and Tanauan.

The DILG had also ordered businesses in the danger zone to halt operations or face cancellation of their permits, but on Tuesday, Año decided to leave the operation of businesses in low-risk areas of Tagaytay City to the discretion of the mayor.

Businesses in Tagaytay had asked to be allowed to continue operating, as the city sits above the volcano. In the Senate, Tolentino supported the businessmen’s position.

“Even the President wants to restore [normality],” he said.

On Tuesday, Phivolcs said fluctuating sulfur dioxide emissions indicated interaction between ground water and magma, and the possibility of a big blast remained.

Last week, the Taal’s main crater lake dried up, along with parts of nearby Pansipit River, indicating that magma was pushing up from the volcano’s belly.

Maria Antonia Bornas, chief of Phivolcs’ volcano monitoring and eruption division, told reporters on Tuesday that “magma had already intruded” despite the diminishing number of earthquakes. “This means that the magma that can be erupted by the volcano is already in place.”