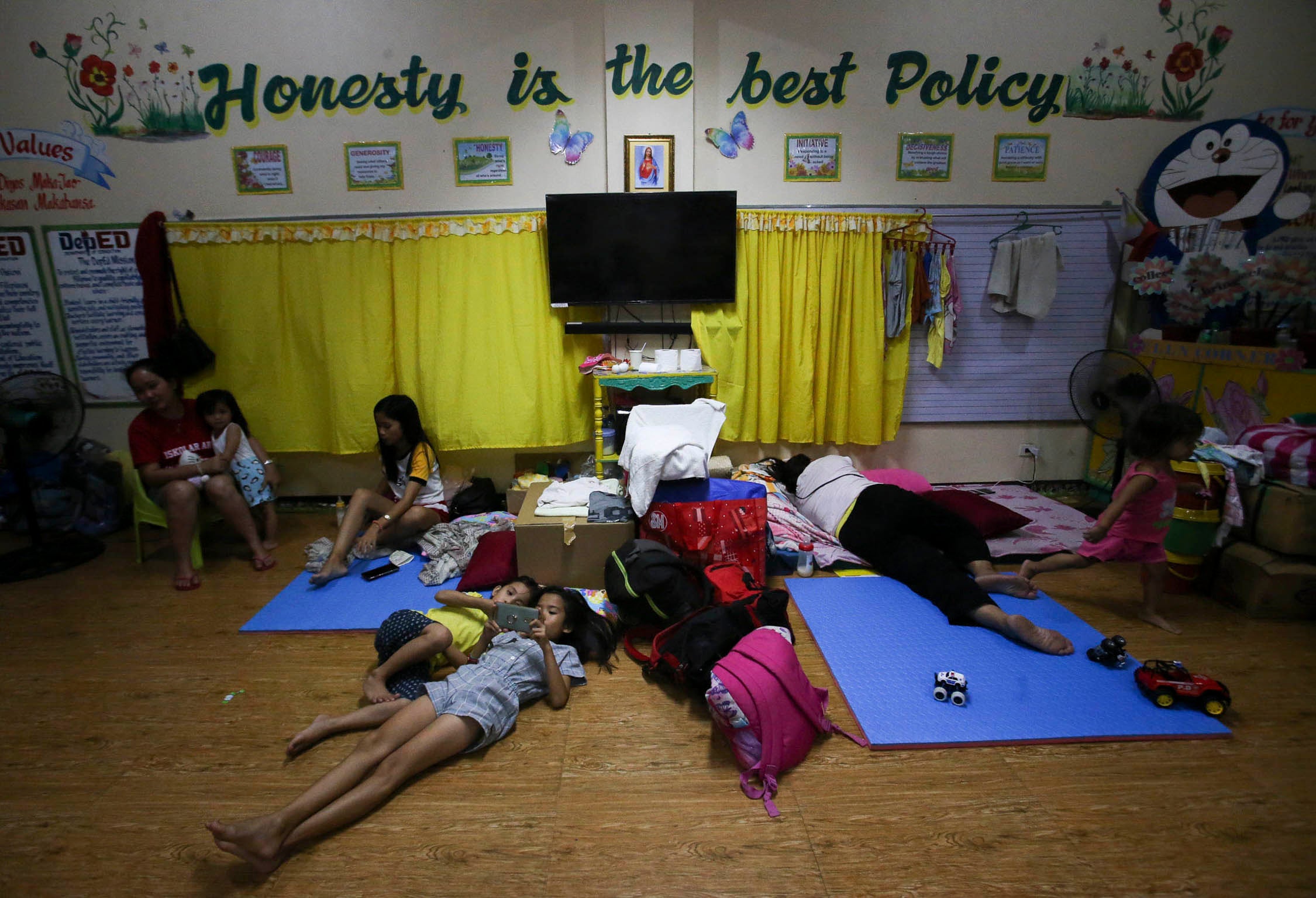 TEMPORARY HOME Rhoda Punzalan (left) holds her daughter while watching over other children inside a classroom in Batangas City East Elementary School. Punzalan’s family sought shelter in the school on Jan. 13 after their house in Barangay Bangin, Agoncillo town, was heavily damaged by ashfall from Taal Volcano. —LYN RILLON

SAN PEDRO CITY—Education officials in Cavite have adjusted class schedules in the province’s schools to accommodate students displaced by the eruption of Taal Volcano in nearby Batangas province.

As of Tuesday, data from the Department of Education (DepEd) in Cavite showed there were 727 “displaced learners” from Batangas, out of the 5,111 people seeking shelter in evacuation centers or staying with relatives in the province.

These “emergency transferees” will have to be admitted “on a temporary basis (but) must be treated as regular students,” said Rommel Bautista, Cavite schools division superintendent.

DepEd personnel were still scrambling to get their numbers of displaced students right as the figures kept changing by the hour, said Elias Alicaya, the assistant schools division superintendent.

“Like now, we just got reports of … evacuees moving in to Rosario (town in Cavite). But Rosario is already too far (from Taal Volcano in Batangas),” Alicaya said in a telephone interview.

Double shiftDepEd advised parents to enroll their children in schools closest to their temporary shelters or evacuation centers.

Not only the students, but displaced teachers, too, should be allowed to teach in Cavite schools, Bautista said.

As schools reopened in most parts of Cavite, DepEd said classes were held in “shifts” to allow more students to use the classrooms.

Another option was to squeeze the normal five-day class schedule in high school into three days “to allow [other students] to use the facility,” Alicaya said.

In some schools, only a few classrooms were being used as evacuation centers.

“We’re looking at moving all the evacuees together [in one school or shelter] so there would only be one direction for the flow of people,” Alicaya said.

Bautista said the government would allot funds for schools serving as evacuation centers for its cleanup and facility maintenance.

Cavite Gov. Juanito Victor Remulla said the province, even with less visible damage from Taal’s eruption, was placed under a state of calamity to allow the provincial government to use its P15-million calamity fund to cover for over 15,000 evacuees from Batangas.

DepEd said classes were still suspended in the towns of Amadeo, Mendez, Tagaytay City, and partly in Alfonso and Silang in Cavite.

In Batangas, Gov. Hermilando Mandanas ordered classes suspended until Jan. 31 or possibly beyond that date, depending on the activity of the volcano.

Batangas State University’s campuses in Batangas City and the towns of Nasugbu and Malvar, for instance, were housing 1,343 evacuees while its campus in Lemery town was inside the 14-kilometer-radius danger zone.