It’s politics, police say of killing of 2 village councilors shot as they were to attend session in Bukidnon town 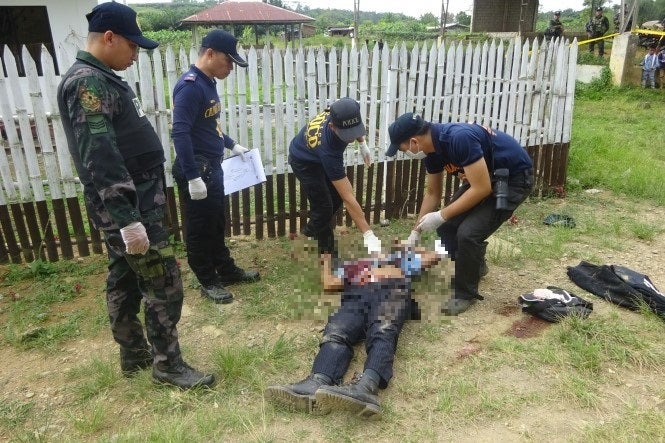 Police forensics examiners check the body of one of two village officials killed at the village of Dominorog in Talakag town, Bukidnon province just as they entered the village hall to attend a council session.
PHOTO FROM BUKIDNON POLICE

CAGAYAN DE ORO CITY—Police tagged politics but won’t elaborate on the possible motive in the killing of two village councilors of a Bukidnon town on Monday, Jan. 20 just a few steps from the village hall where they were to attend a council session.

Loreno Pedyaan and Mauricio Guinto, councilors of the village of Dominorog in Talakag town, were about to enter the village hall to attend the council’s session when they were shot at 9 a.m. on Monday.

Both were prominent personalities in Dominorog, a village populated by members of the Higaonon tribe about 54 kilometers from the center of Talakag.

Maj. Silvestre Asiong Jr., Bukidnon provincial police spokesperson, said investigators were zeroing in on politics as a possible motive for the killing.

Asiong refused to elaborate, though. He confirmed reports that the victims were on their way to the council session when they were shot.

Witnesses said a lone gunman approached Pedyaan and Guinto and shot them at close range and just a few meters from the village hall.

Pedyaan, who was shot in the chest, tried to run from the suspect, fell to the ground and died on the spot.

Guinto, who was shot in the head, was rushed to the Bukidnon Provincial Hospital where he was declared dead.

SSgt. Ismael Balbutin, Talakag police investigator, said in a separate interview that at least three suspects, who rode on two motorcycles, were involved.

Two of the suspects acted as lookouts, he said.

Balbutin said the lookouts stood near the village hall entrance. “They must have signalled the gunman” when the targets arrived, Balbutin added.

Balbutin said the Talakag police already had a list of persons of interest but they could not yet make it public pending further investigation.

Police said they would give the victims’ families and colleagues time to mourn and bury Pedyaan and Guinto before proceeding with the investigation.