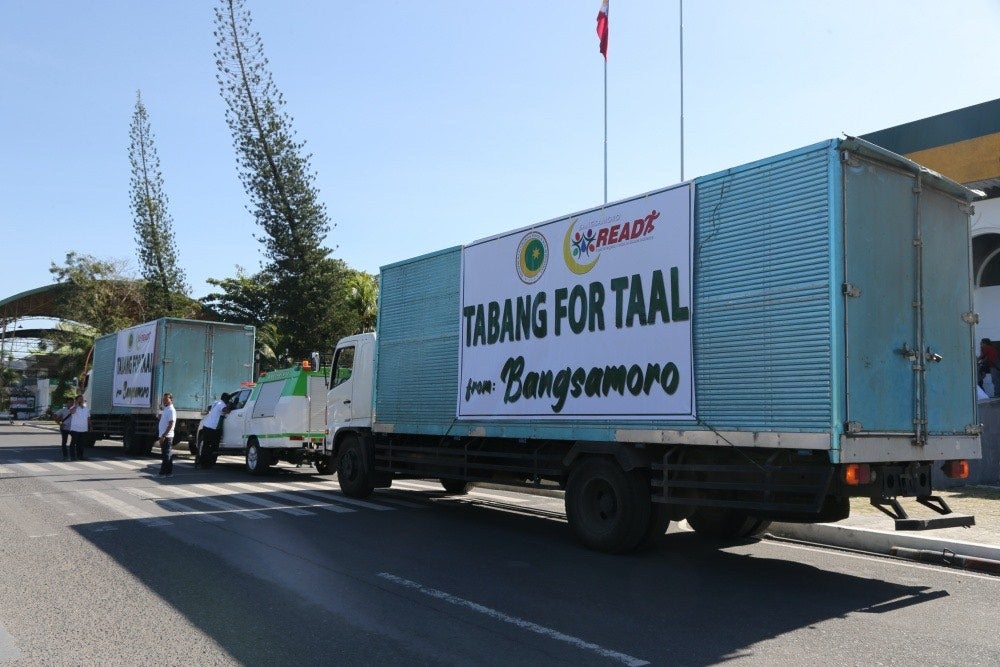 TABANG (HELP) FOR TAAL. Part of the 3-truck convoy from the Bangsamoro bringing emergency aid to victims of Taal volcano eruption in Batangas province. CONTRIBUTED PHOTO

COTABATO CITY—The only Muslim autonomous region in the country is pitching in to bring relief and aid to victims of the Taal Volcano eruption, sending two truckloads of goods and saying there are no boundaries when it comes to helping others.

Officials of the Bangsamoro Autonomous Region of Muslim Mindanao (BARMM) were at a sendoff ceremony for the truck convoy that left this city on Monday and was expected to be in Batangas province on Friday (Jan. 24).

Naguib Sinarimbo, BARMM interior and local government minister, said there are at least 130 Muslim families who are also suffering from the effects of the eruption.

These were in the towns of Tanauan, Lipa and Lemery.

Sinarimbo said the Muslim evacuees had “specific requests to keep up with the Islam faith.”

Some 500 food packs were for Muslim residents and 1,000 others would be turned over to a command post handling donations of relief goods.

BARMM Chief Minister Murad Ebrahim said the readiness to help was in keeping with the region’s thrust toward moral governance.

The regional government, Ebrahim said, “does not only limit its concerns to its constituents but also to others who are in need.”

“BARMM assistance recognizes no religious or political boundaries,” Ebrahim said. “We will extend help to anyone in need,” he added.

Sinarimbo said this was the first time BARMM extended help to other areas. He said BARMM officials were studying whether to send more help to victims of the eruption in the coming days.