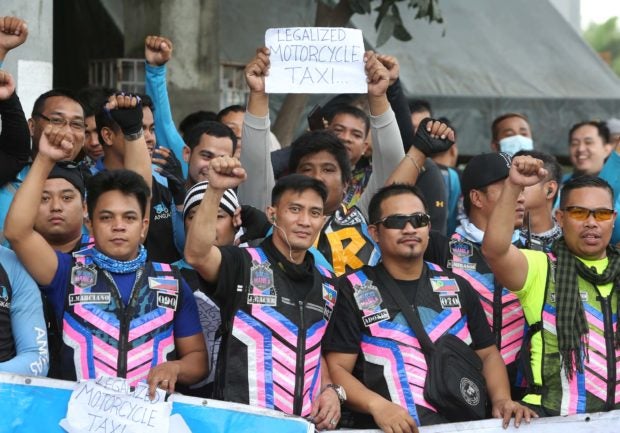 SENATE PROTEST Angkas drivers raise their fists in protest during Monday’s Senate hearing on motorcyle taxis after a member of the Land Transportation Franchising and Regulatory Board said the agency would terminate its pilot test for all motorcycle taxis next week. INQUIRER file photo / MARIANNE BERMUDEZ

MANILA, Philippines — President Rodrigo Duterte agreed that the implementation of the pilot program on the safety of motorcycle taxis should push through, according to his former aide and Senator Christopher “Bong” Go.

(He agreed that the units of motorcycle taxi should not be impounded. That the pilot test should continue for the meantime that there’s no amendment yet to the existing law).

In June last year, a six-month pilot run was approved to help Congress further evaluate pending bills seeking to legalize the use of motorcycles as public utility vehicles (PUVs).

The Department of Transportation (DOTr) technical working group (TWG) on motorcycle taxis, however, recommended the cancelation of the pilot run meant to assess the safety of bikes as a mode of public transportation, citing legal impediments which they said hindered them from gathering sufficient data for the study.

But after senators grilled the TWG over its reasoning behind the termination of the pilot run during Monday’s Senate hearing, the TWG reversed its decision.

Land Transportation Franchising and Regulatory Board (LTFRB) board member Antonio Gardiola Jr. said that the implementation of the pilot program on motorcycle taxis will continue.

Go, meanwhile, stressed that while he supports the motorcycle-for-hire services because it provides livelihood and an alternative mode of transportation to commuters, the safety of passengers should be of utmost importance.

(For me, it’s the safety of the passengers. That’s why I told them to follow safety nets. The drivers should have vast experience. That’s more important).

Go said the President also shares the same sentiment in terms of ensuring the safety of passengers.

(He’s a rider himself, so safety. Even he himself figured in an accident before. So not only the safety of the drivers but also the passengers because this is becoming into a public utility vehicle, so that’s another thing).

Read Next
Crime in Davao Sur down by 48 percent in 2019
EDITORS' PICK
Smart, TNT launch more powerful and value-packed Double GIGA+ 50 offer
Pagasa: No tropical cyclone expected in the next few days
House energy committee chair Arroyo bats for cheap electricity
NDRRMC confers posthumous award on 5 fallen Bulacan rescuers
Having confidential funds not a DepEd norm – Pimentel
Motorcycles, smartphones, and cash prizes up for grabs in TNT’s ‘Tuloy Ang Saya’ Raffle in Mindanao
MOST READ
Sharon Cuneta ‘turned away’ at Hermes boutique in Seoul, welcomed by LV
Having confidential funds not a DepEd norm – Pimentel
What are the chances? 433 bettors win ₱236M Grand Lotto 6/55 jackpot
Marcos in Singapore for F1 Grand Prix – source
Don't miss out on the latest news and information.