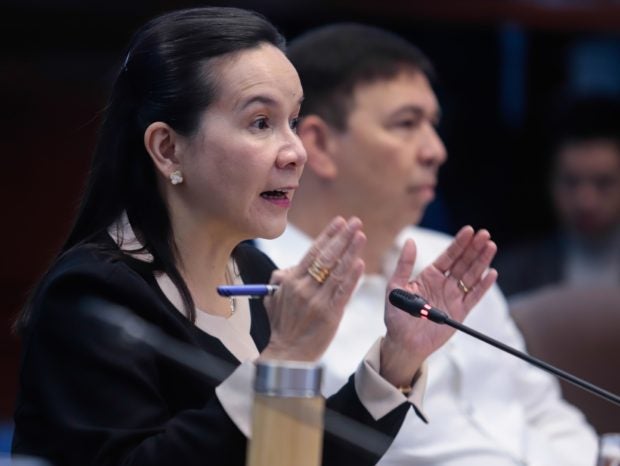 Sen. Grace Poe, the chairperson of the Senate Committee on Public Services, presides over the public hearing on several proposals allowing and regulating the use of motorcycles as public utility vehicles or “motorcycle taxis” Monday, January 20, 2020. Poe questioned Land Transportation Franchising and Regulatory Board officials for their failure to come out with a study on the viability and safety of motorcycles as PUVs. Also in the photo is Senate President Pro Tempore Ralph Recto. PRIB Photo by Henzberg Austria/20 January 2020

MANILA, Philippines — Some Senators have questioned the recommendation of the technical working group (TWG) under the Department of Transportation (DOTr) to terminate the pilot program for motorcycle taxis and expressed their belief that such a move appears to be just an act of revenge.

(Full of anger, and brimming with revenge).

She was referring to TWG’s recommendation to immediately cancel the pilot run, which was supposed to conclude in March.

(You know, what should be questioned is their competence to lead that program.)

Poe also surmised the TWG’s motion seeking to terminate the study was a “provocation.”

(I don’t know who they’re trying to provoke. Are they looking for a fight? They know that there’s a discussion going on. Why did they not wait to listen to the arguments of all parties before they came with this decision?)

(It’s making me think that what the others were saying was correct that this seems just an act of revenge and because they got pissed.)

The document Recto was referring to was the recommendation submitted by the TWG to Congress seeking to cancel the implementation of the pilot program.

Prior to the hearing, TWG head and Land Transportation Franchising and Regulatory Board (LTFRB) board member Antonio Gardiola Jr. has disclosed submitting to Congress their recommendation to cancel the pilot study on motorcycle taxis due to legal impediments.

At the same time, Recto slammed what he called TWG’s “arbitrariness” on imposing a 10,000 bikers limit for each motorcycle-hailing firm participating in the pilot study.

The Mandaluyong City Regional Trial Court, however, earlier issued a temporary restraining order (TRO) that halted for 72 hours the implementation of the government’s ceiling on the number of motorcycle taxis allowed to participate in the ongoing pilot program.

(It shows that you lack public consultations that’s why the court issues TRO against you, that’s the reason. And then because of  the TRO, you show anger.)

(It is clear in this document, too much anger. Because they had a rally against you, you’re now angry. You lacked public consultation, that is your problem.)

(What Senator Recto said is right. What you’re doing is revenge. This is revenge.)

Gatchalian said he could not see the basis of TWG’s recommendation to terminate the pilot testing on motorcycle taxis.

(All of these have no basis and you heard what our senators said and all of us agree that this resolution is not right because our riding public are already suffering.)

TWG said in its recommendation that they could not undertake or execute several activities due to legal actions taken by ride-hailing firm Angkas.

Deployment of mystery passengers, visitation, and inspection of facilities of participating firms as well as the conduct of field study are among the activities TWG said they were unable to do because of prevailing legal deterrents.

But Gatchalian said he was not convinced the legal actions taken by Angkas should hinder the implementation of the mentioned TWG activities.

(The TRO was about the cap, there’s no TRO on mystery passenger, visitation, and conduct of field study why didn’t you do it?)

In June last year, a six-month pilot run was approved to help Congress further evaluate pending bills seeking to legalize the use of motorcycles as public utility vehicles.