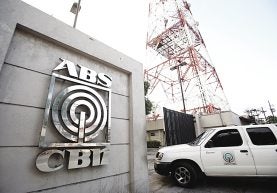 UNCERTAIN FRANCHISE ABS-CBN, the radio-TV network giant controlled by the Lopez family, has a formidable obstacle to overcome in renewing its franchise at the end of March 2020 after President Duterte said he would block it and told company owners to just sell it. Malacañang on Thursday, January 16, 2020, said Duterte has nothing to do with the alleged move of the Office of the Solicitor General to ask the Supreme Court to revoke the franchise of media giant ABS-CBN. Philippine Daily Inquirer/RICHARD A. REYES

MANILA, Philippines — President Rodrigo Duterte has nothing to do with the alleged move of the Office of the Solicitor General to ask the Supreme Court to revoke the franchise of media giant ABS-CBN, said Malacañang said.

Presidential spokesman Salvador Panelo issued the assurance even as Duterte has repeatedly threatened to block the franchise renewal of ABS-CBN, which expires in March.

“You must remember that the job of the SolGen is to file the appropriate petitions when he sees or feels that there is a transgression of franchises or any law for that matter,” Panelo said in a Palace press briefing.

A media report earlier claimed that  Solicitor General Jose Calida is set to file a petition before the high court to revoke the congressional franchise of ABS-CBN due to supposed “violations” committed by the broadcast network.

In an interview, Panelo, who is also Duterte’s chief legal counsel, argued the SolGen’s move could not be considered an issue of press freedom.

(Whenever there are laws violated, you cannot invoke press freedom. Press freedom itself has its limitations.)

The President previously asked the Lopez family, controlling owner of the publicly listed company, to just sell off the media network as he vowed to “see to it” that it will lose its battle for franchise renewal.

Television and radio broadcasters in the country are required to get a franchise from Congress under Republic Act No. 3846.

“If I were you, just sell it. Because it’s only now that the Filipino can retaliate against your abuses. And I will make sure that you will remember this episode of our times forever,” Duteret said.

“The renewal or nonrenewal of the ABS-CBN franchise was casually mentioned in a Cabinet meeting several months ago, but the filing of a quo warranto petition has never been discussed at all,” Guevarra told reporters on Thursday.

The President unleashed the attack on the TV network as his friend, Davao City businessman Dennis Uy, is expanding into the media and entertainment business with the founding of Udenna Communications Media and Entertainment Holdings Corp. With DONA Z. PAZZIBUGAN