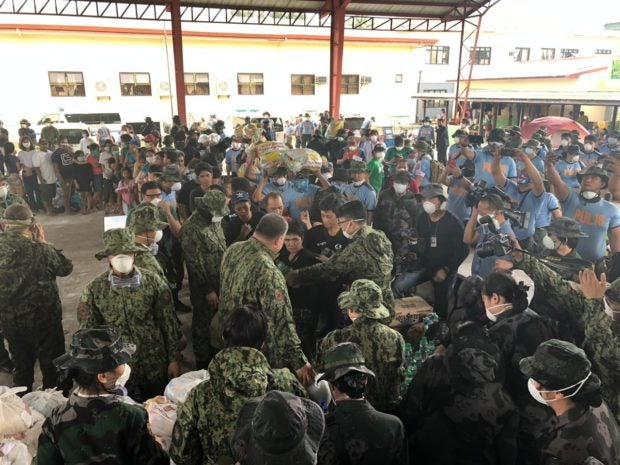 BATANGAS, Philippines — A band of police officers have put down their firearms – albeit momentarily – for microphones, drums, and electric guitars and afforded some entertainment to evacuees at General Malvar Memorial School in Sto. Tomas, Batangas.

Approximately 1,800 evacuees were given temporary relief from worries on Wednesday by the five-member National Capital Region Police Office (NCRPO) band, which gave their version of Sarah Geronimo’s “Tala”, Eraserheads’ “Magasin”, and Aegis’ “Halik”, among others.

The evacuees have been staying in the General Malvar Memorial School since Monday, a day after Taal Volcano had a phreatic eruption – belching a huge column of ash, steam, and volcanic rocks on January 12, which eventually caused heavy ashfall in Batangas as well as its surrounding provinces and regions, including Metro Manila.

Taal Volcano’s steam-driven episode resulted in massive evacuation of dwellers in Batangas and nearby areas. As of Wednesday, June 15, Taal Volcano remains under Alert Level 4, which means that a fiery explosion is imminent within hours or days since the volcano still manifests“intense unrest, continuing seismic swarms, including harmonic tremor and/or low-frequency earthquakes.”

(The NCRPO rescue command talked about bringing a band at the evacuation center so that they would at least alleviate their depressing situation and would give them happiness.)

Aside from a mini-concert, a magic show was also organized to entertain children at the evacuation center.

Sinas then distributed around 500 animal stuffed toys to the children.

“At least matulog sila may laruan sila. Itong programa na ito tuloy-tuloy ito (At least children will be sleeping with toys beside them. This program will just continue),” Sinas said.

NCRPO’s team also brought 2,000 packs of relief goods as well as medicine for the evacuees.

Doctors from NCRPO, Bureau of Jail and Management Penology, Bureau of Fire Protection, and the city government of Manila were also deployed at the evacuation center to extend medical assistance to the evacuees.

Agnes Ibera, officer-in-charge of PCSO’s corporate planning development, said they are preparing financial assistance per municipality in Batangas that will be sourced from Lotto and Scratch-it tickets funds.