Two popes — one retired, one reigning — cause a furor 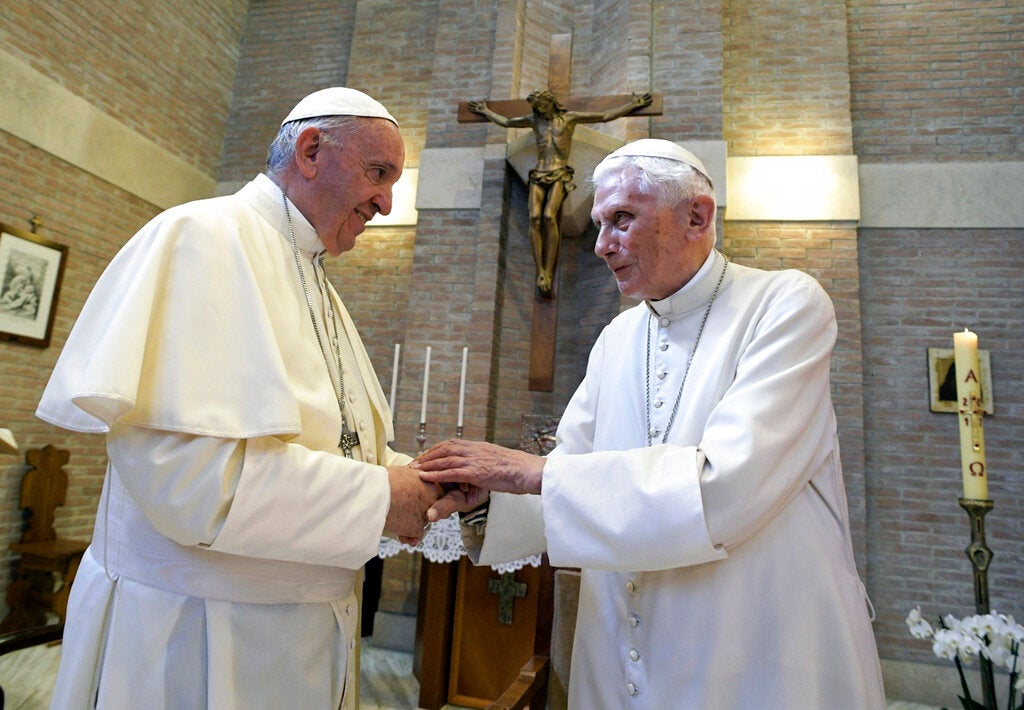 In this June 28, 2017, file photo, Pope Francis, left, and Pope Benedict XVI, meet each other on the occasion of the elevation of five new cardinals at the Vatican.  (L’Osservatore Romano/Pool photo via AP)

VATICAN CITY  — Ever since Benedict XVI announced he would become the first pope in 600 years to resign, Catholic theologians, canon lawyers and others warned of the potential confusion in having two popes living side by side in the Vatican, one reigning, the other retired but calling himself “emeritus pope” and still wearing the white cassock of the papacy.

In a saga befitting the Oscar-nominated movie “The Two Popes,” Benedict co-wrote a book reaffirming the “necessity” of a celibate priesthood. There was nothing novel with his position, but the book is coming out at the same time Pope Francis is weighing whether to ordain married men in the Amazon because of a priest shortage there.

The implications of Benedict’s intervention were grave, since the issue of priestly celibacy is perhaps the most consequential and controversial decision on the current pope’s agenda. It raised the specter of a parallel magisterium, or official church teaching, at a time when the church is already polarized between conservatives longing for the orthodox purity of Benedict’s reign and progressives cheering Francis’ liberalizing reforms.

“It’s one thing to publish, as a private citizen, a book about Jesus as Benedict did before he resigned,” the Rev. Jean-Francois Chiron, a theologian at the University of Lyon, wrote in the French Catholic daily La Croix. “It’s another thing to take sides in important, current questions facing the universal church.”

On Tuesday, Benedict distanced himself from the publication and asked to be removed as the co-author of the book, “From the Depths of Our Hearts,” which is coming out in French on Wednesday and in English next month.

Benedict’s longtime secretary, Archbishop Georg Gaenswein, said that there had been a “misunderstanding” with his co-author, Cardinal Robert Sarah of Guinea, and that while Benedict contributed an essay to the book, he never intended to be listed as the co-author.

That should have closed the matter, albeit imperfectly. However, the book’s English-language publisher, Ignatius Press, refused to back down, saying the book would carry Benedict’s name as co-author.

In a statement, the San Francisco-based Ignatius said it had worked from the text provided by French publisher Fayard, which listed two authors contributing a chapter apiece and a jointly written introduction and conclusion.

“Ignatius Press considers this a coauthored publication,” it said.

Ignatius, Fayard and all other publishers clearly have more to gain selling a book authored by a former pope than one written by a Vatican cardinal.

Benedict’s association with the book was surprising, given that he had vowed to live “hidden from the world” when he stepped down in 2013, precisely to avoid any suggestion that he still wielded papal authority.

But the controversy made clear once again that the unprecedented reality of a retired and reigning pope still has some wrinkles to be ironed out.

Some commentators have called for new rules for future retired popes, including not allowing them to be called “emeritus pope” or wear the papal white cassock, to remove all real and symbolic associations with the papacy. Instead, they said, they should be called “emeritus bishops of Rome,” wear the traditional black of the priesthood and revert back to their pre-papal names.

Others noted that the lines in Benedict’s case were particularly blurred — and should be corrected in any future papal abdications — because of Gaenswein’s dual role: He is both Benedict’s private secretary and the prefect of Francis’ papal household.

Villanova University theologian Massimo Faggioli said the main problem has been that Benedict and his entourage have been winging it for seven years, making up the office of the “emeritus pope” as they go, answerable to no one and regulated by no rules.

“Just as no one is in charge of accepting the pope’s resignation, no one was in charge either of telling Benedict XVI what he could and couldn’t wear, where he could live, what kind of entourage he could have,” Faggioli wrote in the National Catholic Reporter.

He noted that retired bishops at least have official Vatican guidelines to live by.

The guidelines, which are available on the Vatican website, read: “The bishop emeritus will be careful not to interfere in any way, directly or indirectly, in the governance of the diocese. He will want to avoid every attitude and relationship that could even hint at some kind of parallel authority to that of the diocesan bishop, with damaging consequences for the pastoral life of and unity of the diocesan community.”

The Rev. Thomas Reese, a longtime Vatican watcher, said Benedict had for the most part abided by his pledge to keep a low profile and not speak out much.

“However, whenever he did, he made headlines, and discussions of how his views differed from those of Francis followed,” Reese wrote this week in Religion News Service. “This is problematic for a church that prizes unity.”

“We don’t want to imprison them, as Pope Celestine’s successor did to him, but the church needs to make clear that there is only one pope,” Reese said, referring to the last pope to abdicate.

Sarah, for his part, denied allegations from some quarters that he had manipulated the 92-year-old Benedict, whose frailty was on display as recently as last week when a German TV documentary showed him barely able to speak above a whisper.

Sarah produced letters from Benedict making clear Benedict had written the text and approved of publishing it as a book.

But the cardinal — a hero to purists and conservatives and a quiet critic of Francis — also acknowledged that he knew a Benedict-written text on priestly celibacy would create a clamor, and that he persuaded Benedict it was worth it.

Sarah quoted his own correspondence to Benedict: “I imagine that you might think your reflections might not be opportune because of the polemics they might provoke in newspapers, but I am convinced that the whole church needs this gift, which could be published around Christmas or the start of 2020.”

While insisting that he dealt in good faith with Benedict, Sarah agreed after speaking with Gaenswein to remove Benedict’s name as co-author from future editions of the book.

“Considering the polemics provoked by the publication of the book ‘From the Depths of Our Hearts,’ it has been decided that the author of the book in future publications will be: Cardinal Sarah, with the contribution of Benedict XVI,” he tweeted. “However, the complete text will remain absolutely unchanged.”

While the scandal might have died down, the implications for the office of the “emeritus pope” and Sarah have not. Sarah has clashed with Francis before, is ideologically far to the right and is due to offer his resignation as prefect of the Vatican’s liturgy and worship office to Francis in June, when he turns 75.

He had long been pushed by the right wing as a contender to be the first African pope. But Rorate Caeli, a traditionalist blog highly critical of Francis, said Tuesday the scandal had killed those chances, given the suspicions that Sarah took advantage of an old man.

The controversy, it said, “completely undermines his authority as prefect for Divine Worship, and buries any chances he might have in a future conclave.”