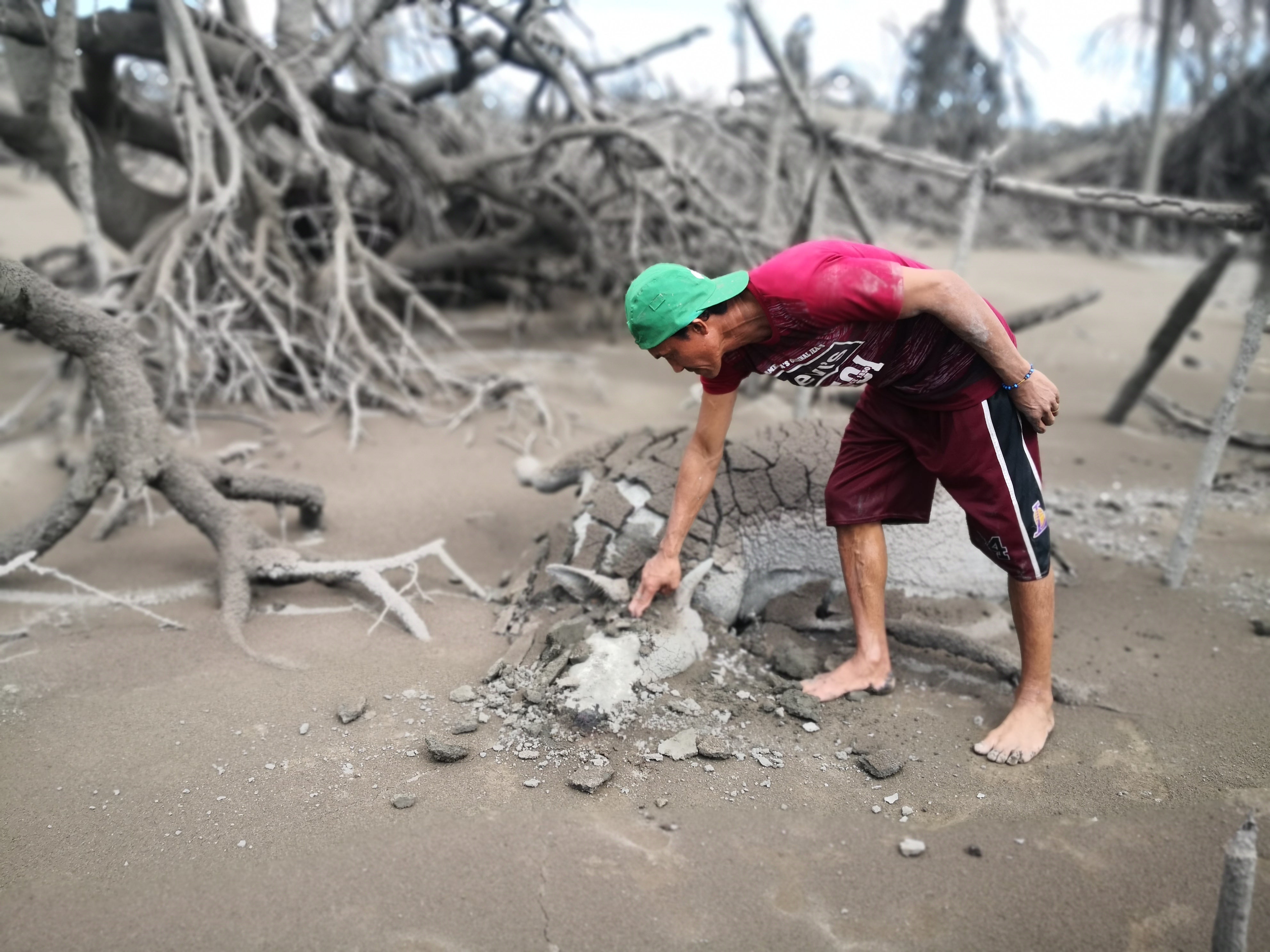 ANIMAL CASUALTY Many farm animals left on the island, like this cow, died from the blast. —MARICAR CINCO

BALETE, Batangas, Philippines ¬— Ash belched out by Taal Volcano has enveloped an entire island, burying houses and coating mountains and ridges with a blanket of gray. Dead animals strewn all over were indistinguishable from house debris, fallen tree branches and halved coconut trees.

This, according to Ricardo Barrion, was too painful to watch.

“We cannot trust the volcano anymore,” he said.

People like the 46-year-old Barrion, who spent most of their lives on the “Pulo,” or the Taal Volcano Island, have developed a unique connection to Taal. Telltale signs

They were used to its constant rumbling or the mild ground shaking that they chose to build their lives on an active volcano — a permanent danger zone that prohibited permanent settlement.

But it was all too different on Sunday, said Barrion’s relative, Berto Murta, 65.

When the earthquakes grew stronger and longer, they knew they had to flee. The final straw was when the main crater, they called the “mother,” spewed a long vertical plume of ash and steam, he said.

Normally, residents on Pulo would get phone messages from the Philippine Institute of Volcanology and Seismology (Phivolcs), warning them of an imminent eruption, or local officials would come on boats announcing an evacuation — a system the community had established since Taal’s last major eruptions in the 1960s.

But there was none that day or it came too late that residents, women and children first, fled on their own on fishing boats to the mainland.

According to the Phivolcs, there were about 6,000 people on Pulo, a 23-square-kilometer land of active craters, that is under the jurisdiction of the municipalities of Talisay, San Nicolas and Balete. In Barangay Calauit, a part of this town, residents had evacuated carrying almost nothing, some not even clothes.

Barrion and his brothers had gone back to Pulo on Tuesday, the first time since the eruption on Sunday, to check their homes and the animals they left behind.

Instead, they found their houses gone and Murta’s 16 pigs all dead, some still inside the pens made of bamboo, already rotting. Barrion’s brother, Ronnie, 48, said all his five cows survived. He wanted to bring them to the mainland. 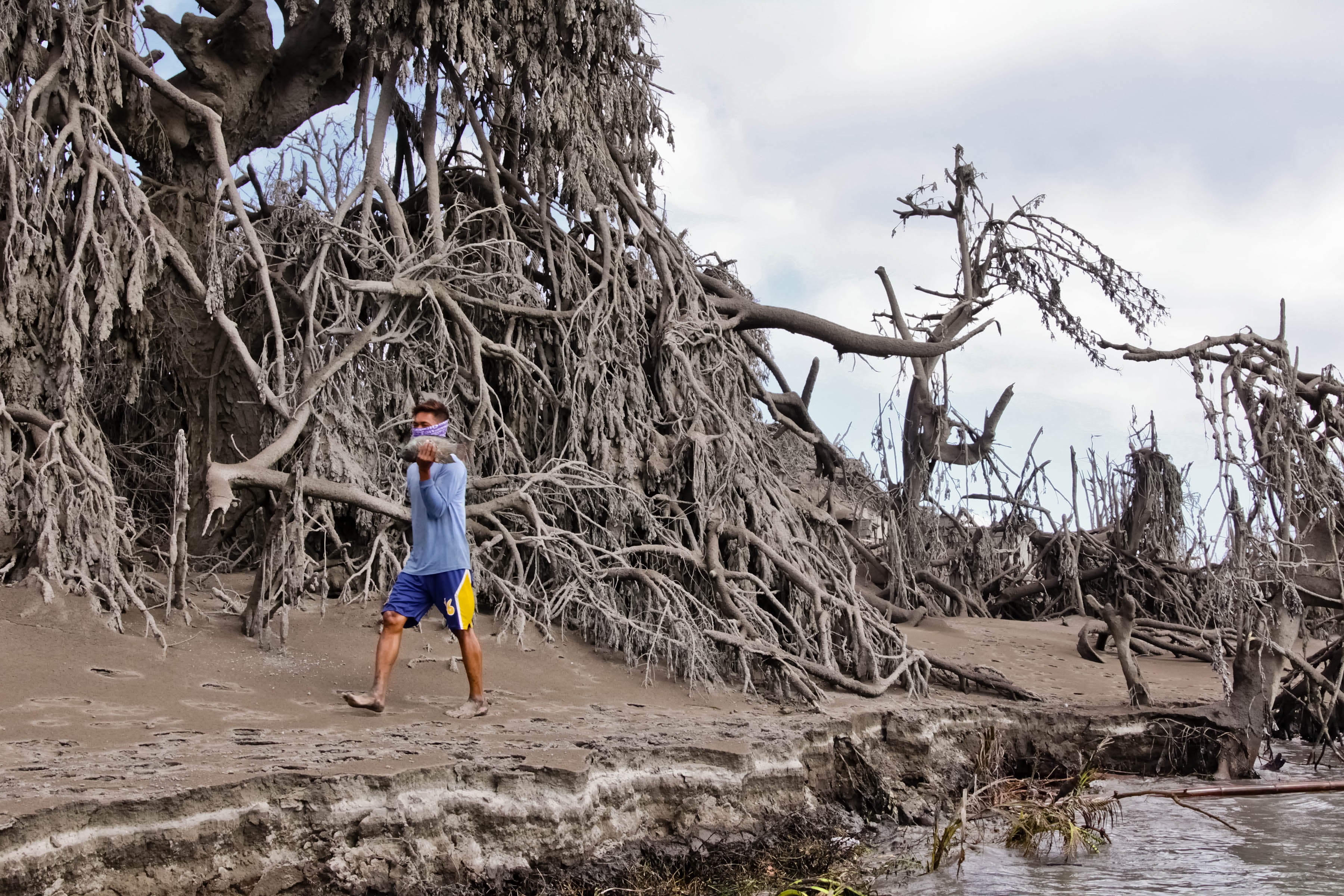 The Inquirer saw one horse running around what used to be a lush island, now desolate.

The brothers caught a live tilapia, floating near the shore, and began to grill them for lunch.

“We haven’t eaten anything yet,” Ronnie said.

Getting closer to the volcano, the lake’s water turned green than blue because of the sulfur, which residents said was a sign of a possible fish kill.

The stench of sulfur also grew stronger and the wind warmer, as one got closer.

UninhabitableOn the boat, a few meters to the island, the volcano’s vents were emitting smoke, that turned white to black in a matter of minutes. The tip of the main crater was covered in white ash.

“We might not live here anymore. Maybe, I would just build a hut, for a place to rest when we go fishing, but I would keep my family (away on the mainland),” Barrion said. It seemed the island would be uninhabitable for a long time, with all the plants dead and the ash about a meter deep.

Despite government warnings, residents here, on the opposite side of the island away from the more devastated towns of Talisay and San Nicolas, had been attempting to return to Pulo to rescue their horses, goats and cows.

Others, when during moments of calm, stole the chance to fish, despite warnings from the police to keep off the lake. “Those animals are the main source of living of people here,” said Chris Palsis, who headed a 20-member team sent by the government to check and rescue animals on Pulo.

Palsis’ team from the Metro Manila Development Authority K9 unit would be the first animal rescue team to enter Pulo since the eruption.

He said the Balete government had designated an area for rescued animals, while groups of veterinarians and other nongovernmental organizations offered help for the animals, all weak if not dying.

Read Next
DTI warns face mask dealers vs profiteering
LATEST STORIES
After winning title, time for LA Tenorio to give back to Batangas folk
‘Mia’: Rom-com with a cause a career-boosting showcase for Coleen Garcia
No.13 lucky for Orlando Bloom
The ties that bind: Why the guys of Black Eyed Peas prefer to stay together
How Yam handles flirtatious guys
MOST READ
Nadine Lustre’s phone stolen in Brazil
Gretchen Barretto’s daughter Dominique graduates magna cum laude from California college
Lights inside SMX hall flicker as Duterte rants vs Ayala, Pangilinan anew
Will you be the first P16 Billion Powerball jackpot winner from the Philippines?
Don't miss out on the latest news and information.