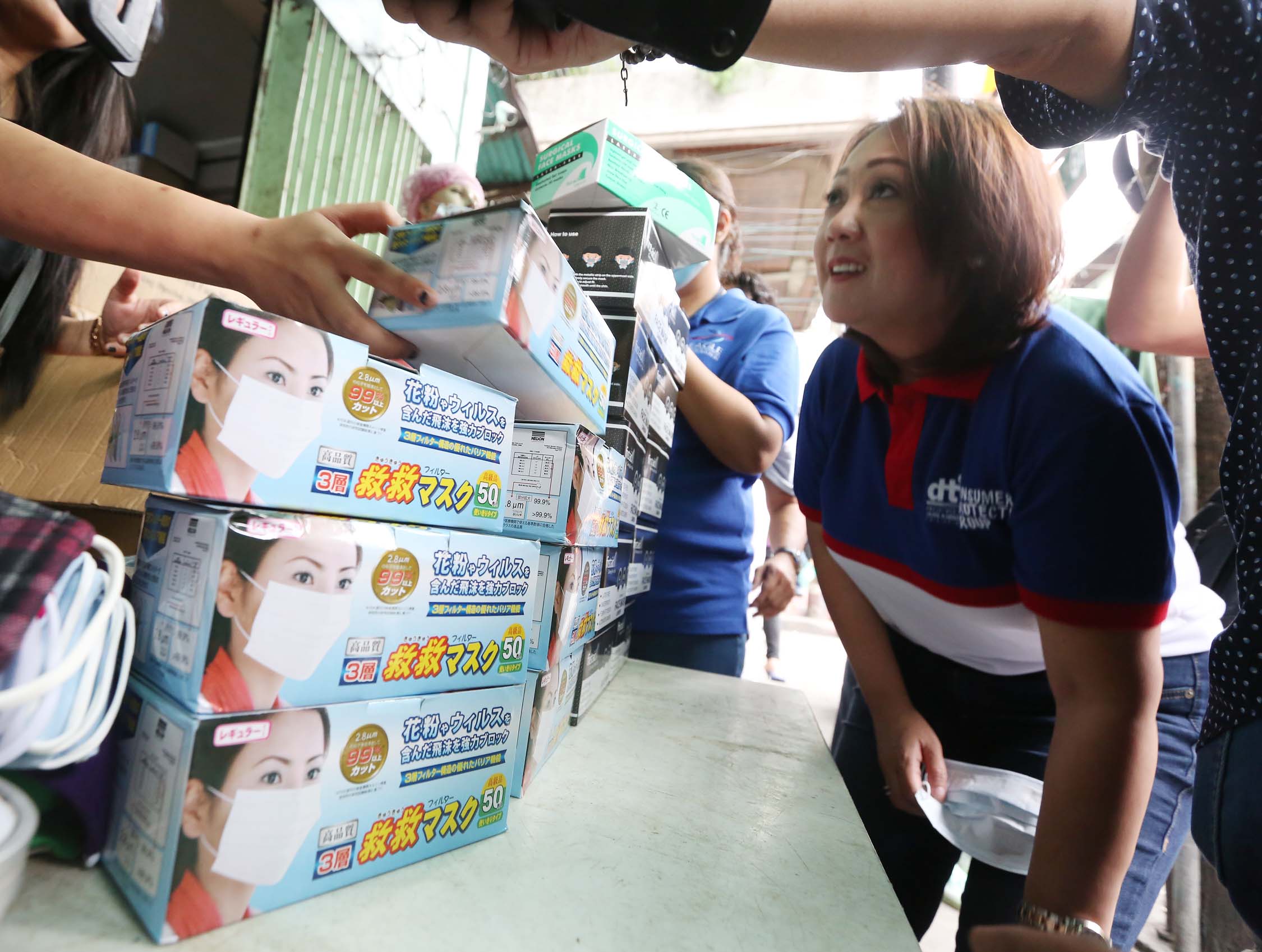 MANILA, Philippines — The Department of Trade and Industry (DTI) has threatened to close down retail stores in Manila that were caught profiteering from the sudden spike in demand for face masks, as people look for protection against the ashfall coming from Taal Volcano.

Trade Undersecretary Ruth Castelo said they had so far issued notices of violations against seven stores in Bambang, Santa Cruz, Manila. While these stores remain open for now, she said she would urge the local government to slap sanctions.

“Yes, [they can still operate] but we will recommend suspension, closure or other sanctions from the [local government unit]. Please note that we only checked on face masks due to Taal eruption. If markups are made for face masks, how much more for other consumer products?”she said in a Viber message.

N95 masks have been in great demand, with popular pharmacy chains Watsons Philippines and Mercury Drug announcing on Monday that they had temporarily run out of stocks in areas hit by the ashfall coming from the erupting volcano. 8-hour use

An N95 mask, according to the US Food and Drug Administration, is capable of filtering at least 95 percent of airborne particles. It is usable for a maximum of eight hours of continuous use.

Castelo said the N95 masks they saw ranged from P85 to P150 apiece, when delivery receipts from suppliers showed the cost for each one at P65. This made for a price difference of 30 to 130 percent, when current rules allowed a markup of only up to 10 percent.

Regular surgical masks have also become hot items, as they are seen as an alternative to the N95 masks that quickly sold out.

According to Castelo, a regular surgical mask that would normally cost P1 per piece was found to be selling at P3.60 each. A box of 50 pieces, which should have been priced at only P50, now costs P180.

Not all the stores that the DTI team, which included Castelo, inspected on Tuesday had delivery receipts. Without these, she said they had “no way of knowing how much they really purchased these items from their supplier.”

This, she added, was considered an act of illegal price manipulation, based on the Price Act. Those convicted could face up to 15 years in prison and a fine of P5,000 up to P2 million.

It is also prohibited under the Consumer Act, specially under provisions of the Unfair or Unconscionable Sales Act or Practice. Although the fine may be negligible, the offender may be charged criminally.

“What aggravates the offenses is the fact that retailers take advantage of the buyers’ general conditions such as the urgent need to buy the masks to avoid the effects of the ash fall,”Castelo said.

Read Next
Zamora: San Juan to payoff P 1-B debt until 2027
EDITORS' PICK
PNP: Checkpoints back in MECQ areas
BREAKING: 3,226 latest COVID-19 cases bring PH’s total to 106,330
Water remains our saving grace right now
Smart 5G goes live
Been there, done that but what’s the difference between MECQ and GCQ?
A gem of a residence in the new normal
MOST READ
MECQ guidelines in infographics
Citing Duterte order, Lorenzana says PH won’t join other navies in South China Sea drills
You’re my ‘idol’ in crafting laws, neophyte senator ‘Bato’ tells Drilon
Lacson takes up cudgels for health workers ‘threatened’ by Duterte
Don't miss out on the latest news and information.