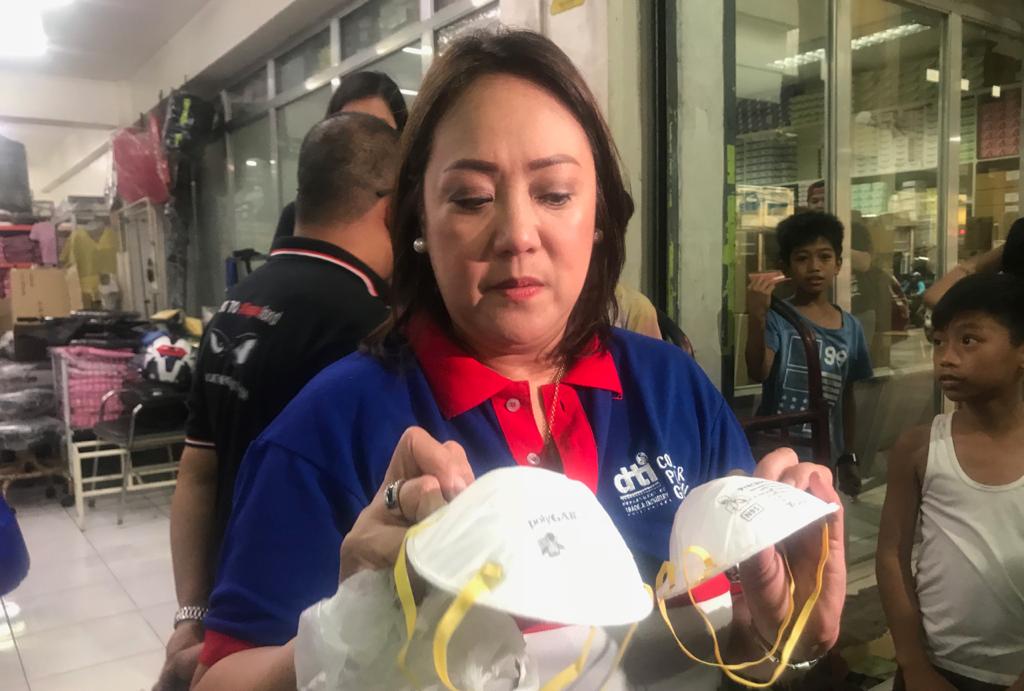 DTI Usec. Ruth Castelo compares a genuine N95 face mask (left) to a fake one during a surprise inspection at stores selling medical supplies in Manila on Tuesday, January 14, 2019. (Photo by Cathrine Gonzales/INQUIRER.net)

MANILA, Philippines — The Department of Trade and Industry (DTI) found fake N95 face masks being sold at a store in Sta. Cruz, Manila during a surprise inspection on Tuesday, following reports that the items were being sold at a much higher price after the phreatic eruption of the Taal Volcano.

DTI Undersecretary Ruth Castelo, who heads the department’s consumer protection group, said the masks being sold at a store along Rizal Avenue were fake and overpriced at P100, even as the similar type of face mask was being sold for only around P50 in nearby stores.

She said that the material used in the fake items were thinner than that of genuine N95 masks.

In her defense, the store owner said she was not aware that the items were fake since it was only being provided by the supplier. She explained that the prices of face masks handed down by suppliers also soared after the phreatic or steam-driven eruption of Taal Volcano on Sunday, and that some stores sell the items for a lower price since they had more stock even before the disaster.

Castelo said personnel of the DTI Fair Trade Enforcement Bureau has already issued notices of violations to seven stores in Manila in just an hour of inspection.

“We have to consider also na medical supplies ito (that these are medical supplies). Ibig sabihin kailangan ng may sakit (It means these are needed by those who are sick),” she said in an interview with reporters.

(Face masks are needed because of the Taal Volcano eruption. Even if some are already sick and are in need of face masks because of the volcanic eruption, some store owners even take advantage of them, that’s why we will not allow that no case will be filed against them.)

But even if the face masks were overpriced, Wilbert Ang, a resident of Metro Manila, still chose to buy the items, saying it was badly needed by his family in Cavite which is just near Batangas province. Fortunately, the brand of N95 masks he brought from the same store was not confirmed to be fake.

During the inspection, Castelo and other DTI personnel also found nearby stores overpricing the N95 face masks as well as surgical masks. She said that under the law, stores can only have a ten-percent profit from the original price of the items.

Castelo said cases of Illegal Acts of Price Manipulation and profiteering will be filed against owners of the stores that have recorded violations.

She added that the DTI may also recommend to local government units to have the stores selling overpriced face masks to have their businesses closed.

The DTI had also requested the Department of Health to issue a suggested retail price for face masks to prevent business owners from taking advantage of residents suffering from ash fall caused by Taal Volcano’s eruption, according to Castelo.