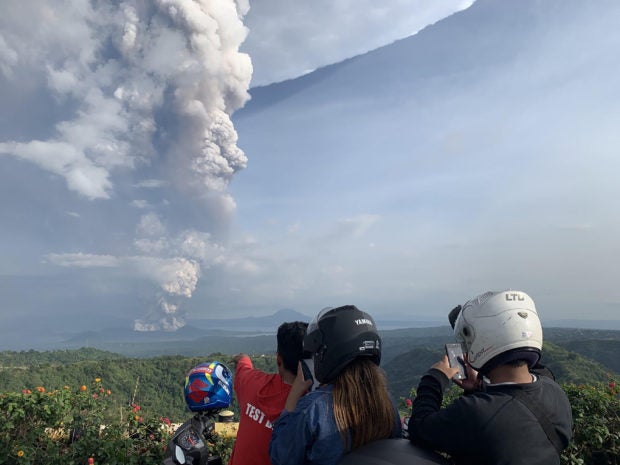 People take photos of a phreatic explosion from the Taal volcano as seen from the town of Tagaytay in Cavite province, southwest of Manila, on January 12, 2020. (Photo by Bullit MARQUEZ / AFP)

MANILA, Philippines — Malacañang on Tuesday guaranteed that the government has enough budget to respond to the recent Taal Volcano eruption.

“With respect to the Middle East, since there’s been deescalation of the conflict there, as for that’s the reason why [the] President did not pursue with his request for Congress’ special session. Vis-à-vis the present eruption, I understand we have enough funds for that,” Palace spokesman Salvador Panelo said in a press briefing.

President Rodrigo Duterte earlier said he wants a special session in Congress to discuss allocation of funds to aid FIlipino workers in the Middle East should the tensions between the US and Iran worsen.

Meanwhile, Duterte is expected to visit the victims of the recent eruption of Taal Volcano in Batangas, which has been placed under state of calamity.

Interior Secretary Eduardo Año, on the other hand, called on local chief executives for an immediate disaster response and urged the public to donate clean drinking water, food, emergency medicines, and other basic essentials to those staying in evacuation centers.

As of Tuesday, the National Disaster Risk Reduction and Management Council (NDRRMC) said over 18,000 persons or more than 4,000 families from Cavite and Batangas have taken temporary shelter in evacuation areas.

This was after Taal Volcano had a phreatic eruption or a steam-driven episode in its main crater over the weekend.

Alert level 4 remains hoisted over Taal Volcano, which means that a hazardous explosive eruption is possible within hours or days.