There was “clearly a lack of dissemination of information”
By: Neil Arwin Mercado - Reporter / @NAMercadoINQ
INQUIRER.net / 01:51 PM January 14, 2020 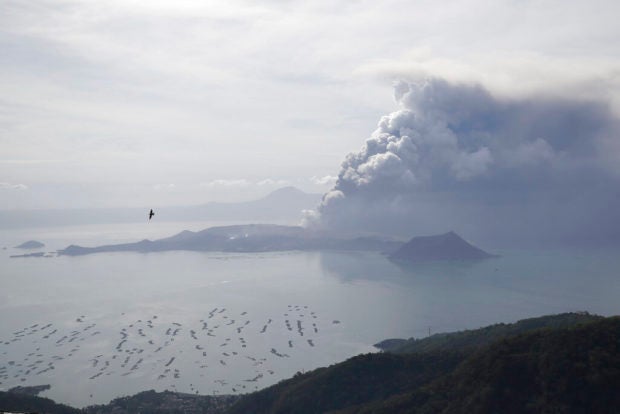 Taal Volcano continues to spew ash on Monday, Jan. 13, 2020, in Tagaytay, Cavite province, south of Manila, Philippines. Red-hot lava gushed out of the Philippine volcano Monday after a sudden eruption of ash and steam that forced villagers to flee en masse and shut down Manila’s international airport, offices, and schools. (AP Photo/Aaron Favila)

MANILA, Philippines — A lawmaker is seeking an investigation on why there were “no news bulletins or SMS alerts” prior to the eruption of Taal Volcano on the afternoon of January 12.

For Cavite 4th District Rep. Elpidio Barzaga Jr., there was “clearly a lack of dissemination of information in the hazards of volcanic activity of Taal Volcano” to the public.

He filed Monday House Resolution No. 643 or the “Resolution Directing the Appropriate Committee to Conduct an Investigation in Aid of Legislation Into the Recent Taal Volcano Eruption.”

“Filipinos were taken by surprise by the recent Taal Volcano eruption wherein the losses in terms of life and property are still unaccounted for,” Barzaga said.

According to Barzaga, there should be an investigation on whether the Philippine Institute of Volcanology and Seismology (Phivolcs) conducted a “comprehensive monitoring” of the situation and if it has the “technical expertise to make a timely forecast of the Taal Volcano eruption.”

“As early as 11 a.m. of 12 January 2020, when the Taal Volcano is already manifesting an increase in the volcanic activity, there are no news bulletins or SMS alerts from the Phivolcs and other concerned government agencies,” he pointed out.

“To be sure, due to lack of information, in the afternoon of the same day, while Taal Volcano is already manifesting increased volcanic activity, people still traveled towards it, while those who were already near Taal Volcano were shocked to see the smoke spewing from it and had to immediately flee under the dangers of ashfall,” he added.

Barzaga said “it cannot be overemphasized” that Phivolcs “has the duty to assess and timely communicate information about volcanic hazards and make real-time warnings of volcanic activity in order to prevent loss of life and property.”

Barzaga also said there should be a “proactive and not defensive” response from Phivolcs and other concerned government agencies as well as local government units regarding their “actions or inactions” before and after Taal’s eruption.

The lawmaker likewise said appropriate charges should be filed against “unscrupulous persons” who sold face masks and food supply at “unreasonable” prices during this time of disaster.

Reports of N95 face masks being sold to as high as P200 per piece, from its original price of P25 to P30 per piece, surfaced as the public rushed to buy it in the wake of an ashfall that followed Taal’s phreatic blast or steam-driven episode.

The Department of Trade and Industry (DTI) has warned businesses and individuals that they may face charges for taking advantage of the situation.

At the same time, Barzaga said there is “imperative need” to determine possible improvements in the responses of government agencies such as Phivolcs, the Philippine National Police (PNP), Department of Social Welfare and Development (DSWD), National Disaster Risk Reduction and Management Council (NDRRMC), and local governments in times of disaster.

He also called for an investigation on the permanent settlement in Taal Volcano Island despite being categorized as a permanent danger zone.

Barzaga, nonetheless, commended the “countless brave and honorable people” who are helping in the aftermath of the eruption.

Taal Volcano remains under Alert Level 4, which is characterized by “intense unrest, continuing seismic swarms, including harmonic tremor and/or low-frequency earthquakes”. This also means that “hazardous explosive eruption” of the country’s second-most active volcano “is possible within hours to days.”