Lava gushes out of Taal Volcano as villagers flee 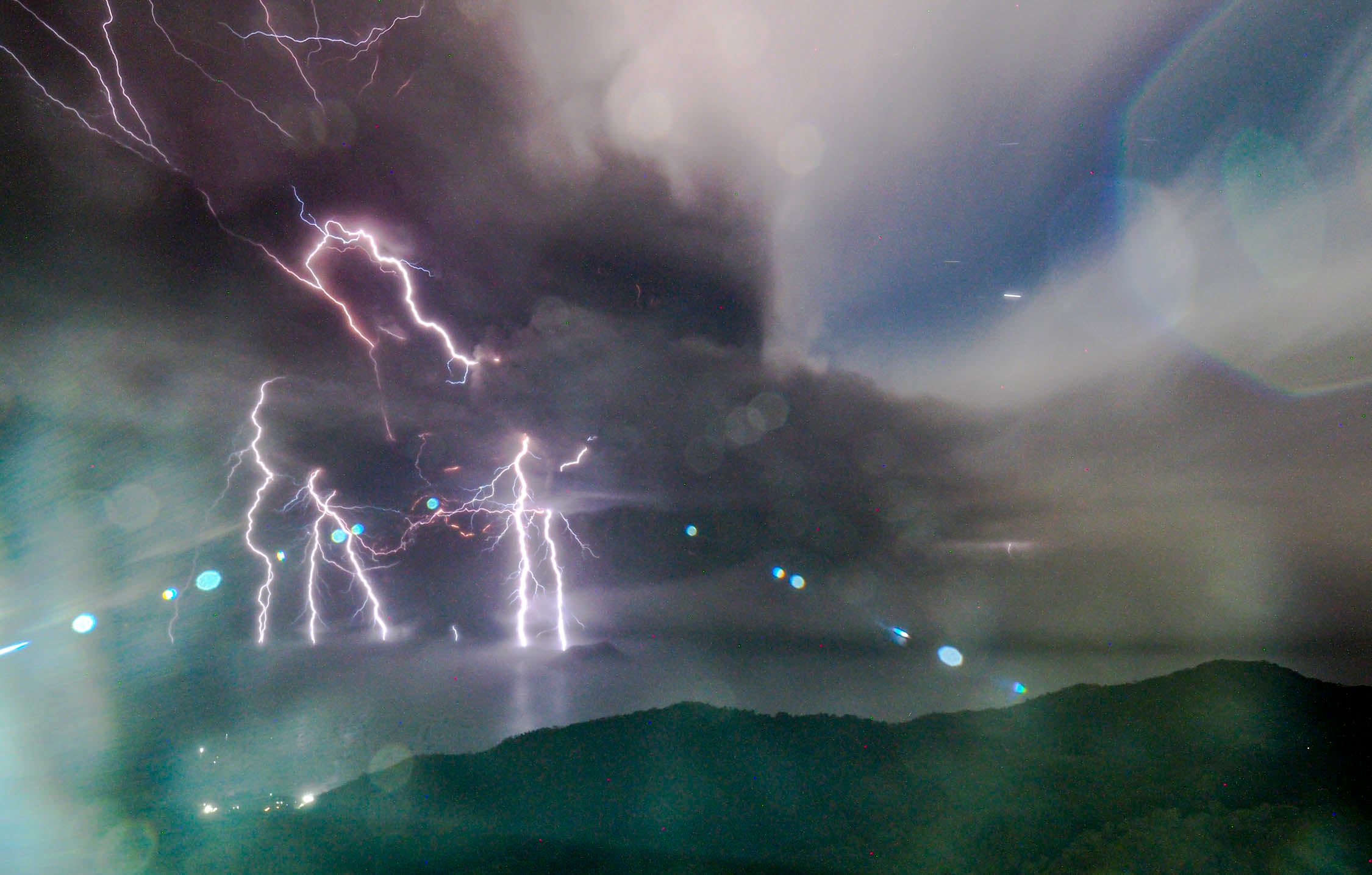 Red-hot lava gushed out of Taal Volcano on Monday after a sudden eruption of ash and steam that forced the evacuation of villagers and shut down Manila’s international airport, schools and businesses.

There were no immediate reports of casualties or major damage from the eruption of Taal that began on Sunday when the volcano, about 70 kilometers south of Manila, spewed ash and steam up to 15 km into the sky.

But clouds of ash blew more than 100 km north, reaching Metropolitan Manila and forcing the shutdown of Ninoy Aquino International Airport with more than 240 international and domestic flights canceled so far.

The airport went into partial operation on Monday, giving priority to departing flights.

The alternative Clark International Airport in Pampanga province remained open, but the Civil Aviation Authority of the Philippines said it would shut it down, too, if ashfall threatened flights.

Schools in the region around Taal, government offices and the Philippine Stock Exchange were closed on Monday as a precaution. (See related story on Page A3.)

One notch to eruption

Sunday’s sudden eruption sent residents on Volcano Island and the area around it — normally a popular tourist spot — fleeing to safety. Authorities warned that an explosive eruption could send a tsunami surging across Taal Lake.

As of Monday afternoon, the Philippine Institute of Volcanology and Seismology (Phivolcs) maintained its alert level on Taal at 4 out of 5, meaning “hazardous explosive eruption is possible within hours to days.”

Level 5 means a hazardous eruption is under way and could affect a larger area with high-risk zones that would need to be cleared of people.

Phivolcs said lava gushed out of Taal’s main crater early on Monday, which together with persistent tremors indicated that magma — molten rock — beneath the volcano was moving up to the surface.

It was a rapid escalation from Sunday’s phreatic explosion that sent residents of villages on Volcano Island and on the rim of Taal Lake fleeing.

Phivolcs said condition on the volcano progressed into magmatic eruption between 2:49 a.m. and 4:28 a.m. on Monday when weak lava fountains gushed out of the main crater.

It said the magmatic eruption was illuminated by lightning, followed by rolls of thunder, similar to atmospheric activity seen and heard on Sunday by people near the volcano.

Sporadic lava fountains flowed out of the main crater, creating steam-driven plumes that shot up to 2 km into the sky, Solidum said.

That development, however, was expected, Solidum said, as the area has several fissures.

“Taal has more than 30 craters and there can be eruptions on any side,” he said. “But based on our monitoring, most likely the eruption will happen from the main crater.” 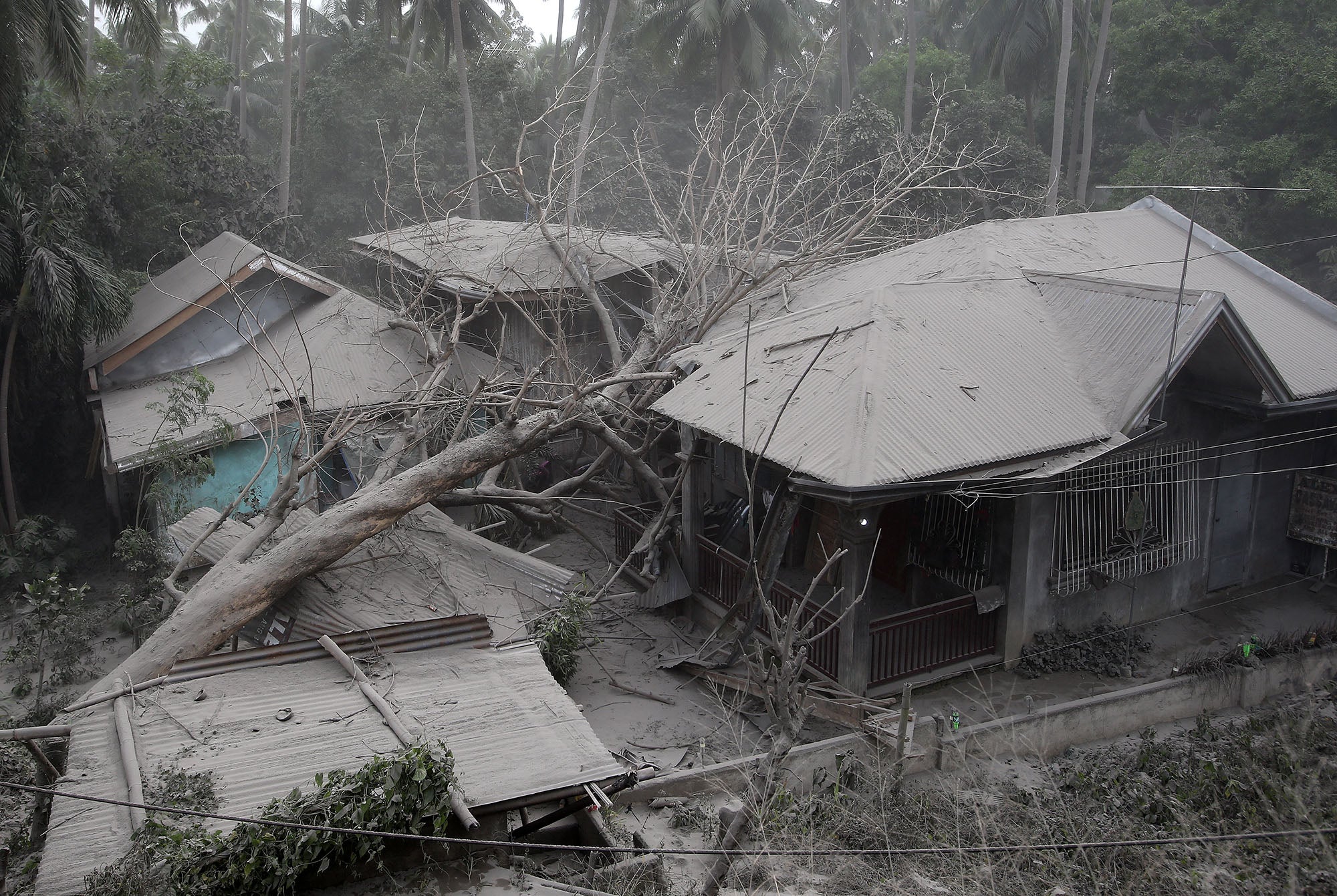 ‘GHOST TOWN’ A tree is felled by heavy ashfall on a cluster of houses. —RICHARD A. REYES

Since 1 p.m. on Sunday, the Philippine Seismic Network in the Taal region had recorded 144 volcanic earthquakes. At least 44 of the temblors were felt in varying intensities in Tagaytay City and in several towns in Batangas, including Alitagtag, Lemery, Santo Tomas and Talisay.

Solidum said the tremors signaled the continuous magma movement beneath the volcano, which may lead to eruption.

Phivolcs also recorded heavy ashfall on the southwest side of Volcano Island, particularly in Cuenca, Lemery and Taal in Batangas.

Volcanic ash, according to the US Geological Survey, is formed during explosive volcanic eruptions. Although it is called “ash,” it is not made of soft material similar to the product of burning. Rather, it is composed of small and jagged pieces of rocks, minerals and volcanic glass the size of sand and silt.

Phivolcs said ashfall could cause irritation and breathing problems. It warned against long-term exposure to ashfall.

Taal may show signs of quieting down in the next few days, but scientists and experts cautioned the public to remain vigilant for any volcanic activity.

The worst that could happen, according to University of the Philippines National Institute of Geological Sciences director Mario Aurelio, would be similar to Taal’s longest eruption in 1754, which lasted for seven months.

On the other end of the spectrum, he said, an eruption could last just a few days.

Defense Secretary Delfin Lorenzana, head of the National Disaster Risk Reduction and Management Council, said 15,540 people had been moved into 75 evacuation centers in Batangas and Cavite as of noon on Monday.

He said evacuations may not reach 300,000 as estimated in Batangas’ contingency plan for Taal.

Speaking at a press briefing, Lorenzana called on villagers who refused to leave their homes and farms to get out while they still could.

“Please leave. This is just temporary. Nobody will loot your homes. Go first to safe areas,” Lorenzana said.

“Our problem here is, Taal has been erupting continuously for more than a hundred years. I think it was 1901 [when it first erupted] and I was there near the volcano when it erupted in 1976. It spewed black smoke. In 1977 it erupted again, that’s more than 40 years. It is ripe. It is almost time that it erupts,” he said.

“Our worst-case scenario is that [Taal] will blow up like Pinatubo,” Lorenzana said.

He recalled that when Mt. Pinatubo, in the Zambales-Tarlac-Pampanga triboundary, erupted in 1991, the entire mountain was wiped out.

“That’s what we’re fearing, that the whole [Volcano] Island would lift and spew everything out,” he said. “[We hope] that does not happen, but we can never predict the actions these volcanoes.”—With reports from Jeannette I. Andrade and the wires