‘People evacuated on their own’ 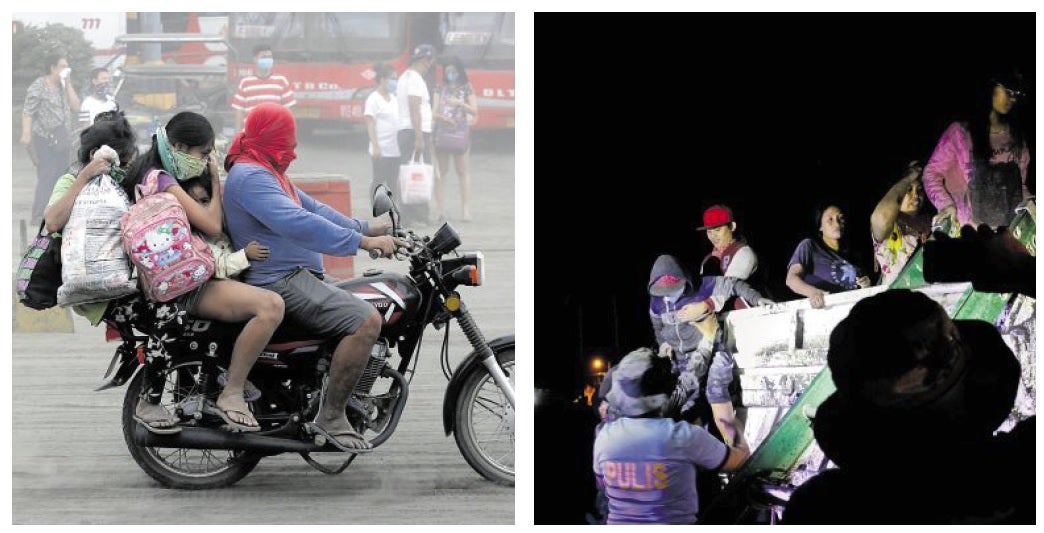 FLEEING TO SAFETY A whole family on board a motorcycle leaves Lemery, Batangas province (left photo). Evacuees from Talisay arrive at an evacuation center in Santo Tomas. —PHOTOS BY RICHARD REYES AND CHRIS QUINTANA/CONTRIBUTOR

AGONCILLO, Batangas, Philippines — Gasoline stations were shut, while stores and eateries were closed, as local government centers hardly functioned except as rendezvous points for military and dump trucks picking up evacuees.

The ashfall triggered by the eruption of Taal Volcano has turned into thick mud or heavy dry dust that blanketed nearly a quarter of the entire Batangas province, mostly the towns that lie closest to the eponymous lake.

Power was out in most of the 11 towns and cities — Talisay, Laurel, Agoncillo, San Nicolas, Santa Teresita, Alitagtag, Cuenca, Lipa City, Mataas na Kahoy, Balete and Tanauan City — which were affected by the ashfall.

Toppled trees blocked roads as cars skidded off the slippery mud in Talisay. When the sun partly shone on Monday, the dry, thick dust, especially on Diokno Highway, which connected Lemery and Agoncillo towns, gave motorists zero visibility even at high noon.

Agoncillo, where one village was celebrating its fiesta on Sunday, quickly turned into a no-man’s land, after the town’s 38,000 residents left behind their homes, dogs and poultry.

Agoncillo’s concrete roads were covered in ankle-deep sand. From higher ground, the houses looked the same, with roofs all covered in brown dust.

The entire province was placed under a state of calamity with more than 25,000 people in evacuation centers, Castro said.

So far, no casualties have been reported since the Philippine Institute of Volcanology and Seismology (Phivolcs) hoisted Alert No. 2 on Taal Volcano, said Health Undersecretary Eric Domingo.

On Monday, people kept moving out to as far as Batangas City or to evacuation centers in Tagaytay City and Alfonso in Cavite province.

“We were at the fiesta [at Barangay] Coral na Munti when the earthquakes started. We didn’t have much time to collect our things when we decided to leave,” said Belen Hernandez, 44, a resident of the lakeshore village of Subic Ilaya, here.

With only a few set of clothes and bringing documents like birth records, Hernandez and her family drove to relatives in Calaca town as soon as they heard that the volcano had erupted, with its ash column of black and white clearly visible from about 7 kilometers off the shore.

“People evacuated on their own. It really was a surprise as there were no warnings from Phivolcs or the local government,” she said.

Despite the risks from brief but constant, strong tremors throughout the day, Hernandez and her sisters returned to Agoncillo for a nebulizer and the puppy that her 17-year-old daughter had asked her to pick up.

Others also kept coming back to check on their houses, while the last batches of residents, like a young mother with three children in tow, finally decided to evacuate.

The Inquirer saw them and many others on the road hitching a ride on police and media cars.

The mother said they initially wanted to sit out the ashfall and tremors but now didn’t know where to go.

While insisting there were evacuation protocols in place, Castro said he, too, was surprised at the quick turn of events, with the volcano’s alert level raised to 4 in a matter of hours, a first for most of the Batangas population.

During the first few hours after the eruption, government agencies scrambled to deploy Army trucks, ambulances, or police mobiles, prompting some Agoncillo residents “to walk for hours” to higher ground, some even to as far as Tagaytay City.

Residents on the “pulo,” or Taal Volcano Island, where the restive main crater is, were first to evacuate also without having to wait for a local government order.

“The boats were like ants floating [on the lake] headed toward the shore [of mainland Talisay],” said resident Marilou Barroro.

In Talisay, families were initially housed in the town’s gymnasium but were later moved out farther to Santo Tomas City after authorities noticed cracks on the gym’s walls.

“But we’re still technically inside [the danger zone],” said Capt. Garry Abregunda, Laurel police chief, as the police were still trying to force a few more families to move to safer areas.

Guillermo Palomino, 50, a councilor in Barangay San Isidro, Talisay, on the pulo, said women and children were allowed to leave Volcano Island first on their boats.

Tourists who happened to be on the island on Sunday were also evacuated first.

“We knew it was going to be this big ,especially when we saw the ash [column] and the rocks as big as this flying around,” Palomino said, his hands gesturing to approximate the size of a basketball.

On Monday, Palomino and other male residents were seen on the Talisay shore, scraping mud off their fishing boats.

There were about 500 boats as almost every family on the island owned one, the only ride from Volcano Island to the mainland.

Aside from their homes, about 2,000 horses were left on Volcano Island, a popular tourist destination that offered horse rides up the ridge of Taal’s main crater.

Those who worked as caretakers of private fish cages in the lake feared the stocks of tilapia and milkfish could have died by now because of too much sulfur in the water.

In Occidental Mindoro, Laguna and Quezon provinces, classes at all levels in private and public schools and work were suspended on Monday afternoon due to ashfall.

The provincial government of Pampanga on Monday deployed a 50-vehicle convoy of medical teams, social workers and search and rescue personnel to help in the evacuation of residents affected by the eruption.