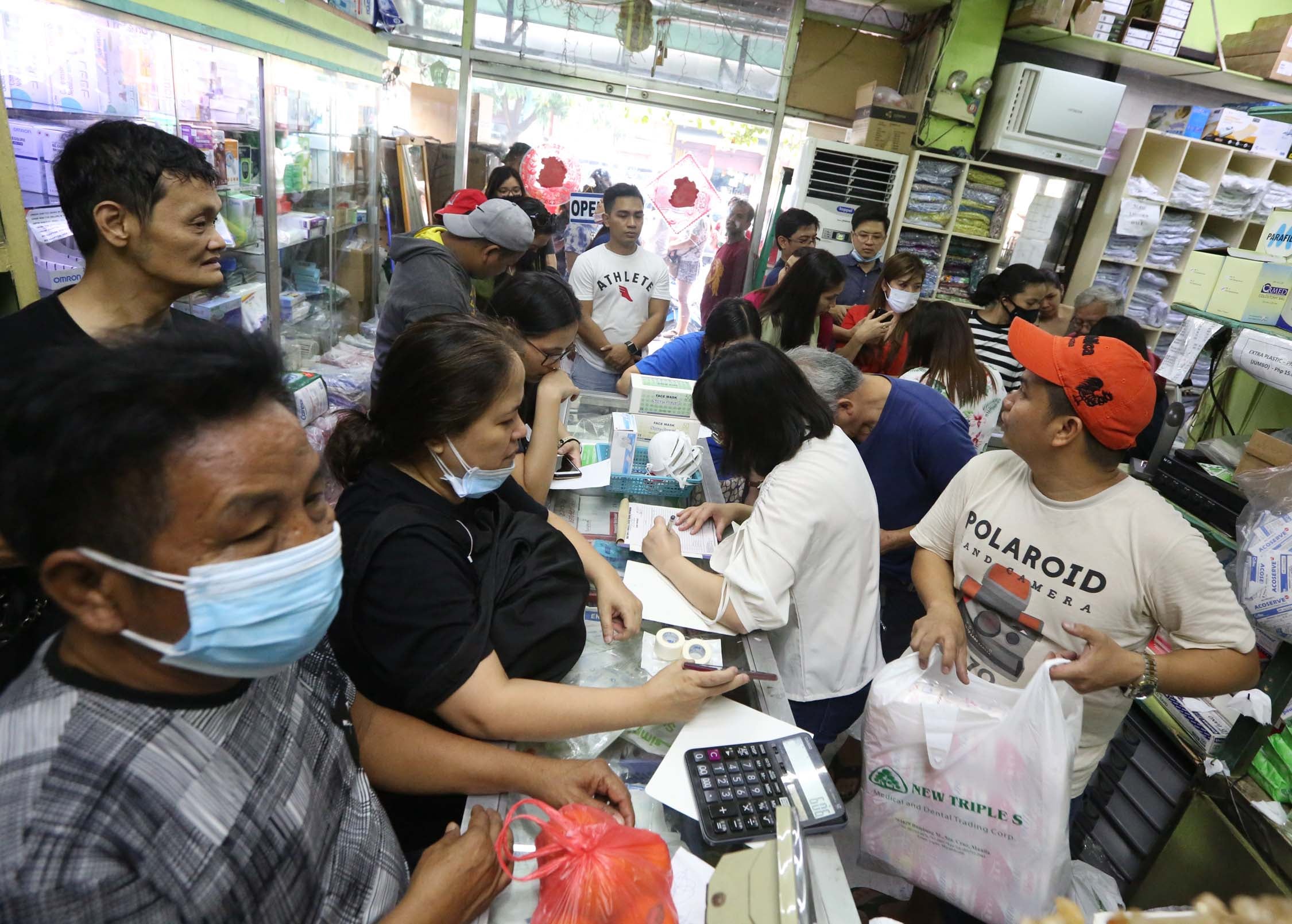 RUNNING OUT After Taal Volcano’s eruption on Sunday, people line up to buy face masks at medical stores on Bambang Street, Santa Cruz, Manila, as a health advisory recommending the N95 mask sets off a sudden shortage in many areas, or its sale elsewhere at exorbitant prices. —MARIANNE BERMUDEZ

MANILA, Philippines — Prices of face masks in Metro Manila soared and supply ran out in a matter of hours after Taal Volcano erupted on Sunday sending ashfall toward the metropolis and leaving people at the mercy of retailers who are profiteering from everyone else’s desperation.

Mercury Drug Store and Watsons Philippines said in separate advisories they had run out of supply of N95 face masks due to the sudden spike in demand.

At a mall in Alabang, Muntinlupa, branches of the two drugstore chains had run out not only of N95 but also of surgical masks as early as Sunday night. Even Handyman and Ace Hardware have run out of supply.

An N95 mask, according to the US Food and Drug Administration, is capable of filtering at least 95 percent of airborne particles. It is usable for a maximum of eight hours of continuous use.

Rowena Espina said she had scoured pharmacies and a department store in her area in Pasay City since Sunday night but all of them said that face and N95 masks had run out.

“But I can’t let my family go out of the streets inhaling all that volcanic dust,” said the 57-year-old mother of five. She put out few of her remaining disposable face masks and add two layers of tissue paper for “extra protection.”

“It’s not enough but this will do for the meantime until I can buy a proper mask,” Espina said.

The ensuing shortage has left a void in the market that is now filled by businesses that very well know that no price is too high when it comes to safety and peace of mind.

A surgical face mask sells for P50 per 50 pieces, or P1 apiece at the New Triple S. Medical & Dental Trading Corp. on Bambang Street in Santa Cruz, Manila, where many go for medical supplies. But the item was selling for P10 each at a mom-and-pop generics pharmacy in Mandaluyong City.

Some retailers in Bambang tell customers that they had already run out of the N95 masks.

The ones that still have supply — no matter how quick its depleting — began selling at a higher price.

In one of the retail stores there, an N95 mask costs P100 per piece, according to an official receipt seen by the Inquirer, more than double the price it cost on Sunday morning, before the eruption.

Before the volcano erupted, one N95 in the same store still cost P40. Now, a box of 20 N95 masks costs P2,000 in the same retail store, a high price that, in any other day, would have left consumers running out the door.

This is a case of profiteering, said Trade and Industry Undersecretary Ruth Castelo when asked for comment. The store, she said, is “taking advantage of the calamity situation.”

Sen. Aquilino Pimentel III, who chairs the Senate’s trade committee, called on consumers to report to him instances of overpricing, a violation of the Price Act.

Manila Vice Mayor Honey Lacuna-Pangan said her office had received complaints that N95 masks were being sold in the city for as much as P200 from its usual price of P25 to P30.

“Let us not use this occasion to prey on others,” Pangan said.

Health Undersecretary Eric Domingo said these “masks need to be available in the severely affected areas where smoke is thickest and for people who are at high-risk and with pulmonary illnesses.”

Ashfall contains fine silica dust that can be deposited in the lungs once inhaled. If left untreated, it can cause inflammation and scarring of the lungs, according to Domingo.

He advised those with asthma and other pulmonary illnesses to protect themselves since exposure to ashfall could be life-threatening.

In the absence of masks, Domingo advised the public to use their clothes to wrap around their head and protective goggles for the eyes.

The store in Bambang received flak from the local government for jacking up the price, but it feels that the blame is misplaced. The store is just part of a value chain that has left it no choice but to cope with the change in prices.

“We were reported because it was too expensive. But what can we do? Our supplier increased their price. Of course, we would also increase our price. We would be at a loss if we didn’t increase prices. We were even reported,” the staff at the retail store said.

The Department of Trade and Industry issued an advisory on Monday, warning businesses against taking advantage of the situation.

“[The] DTI will not hesitate to file administrative and criminal charges against unscrupulous business entities and individuals who capitalize on the consumers’ urgent need for their own profit,” the advisory read.

The local government of Muntinlupa purchased more than 40,000 pieces of face mask, which were distributed to barangay health centers starting on Monday.

Mike Marasigan, head of the Quezon City Disaster Risk Reduction and Management Council, said the LGU quickly exhausted its supply of about 8,000 face masks, which it had distributed primarily to response teams and other emergency personnel.