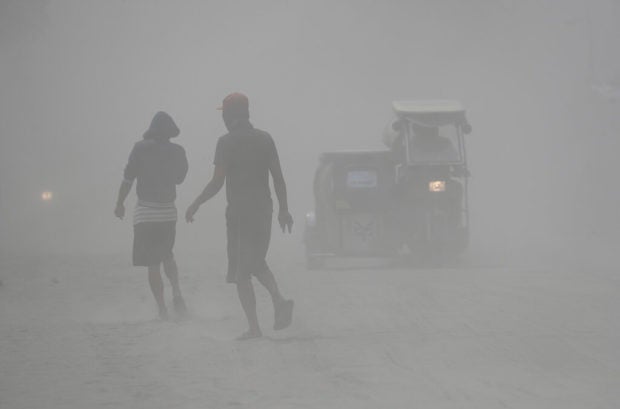 Residents walk in a cloud of ash as Taal Volcano continues to spew ash on Monday, Jan. 13, 2020, in Tagaytay, Cavite province, south of Manila, Philippines. Red-hot lava gushed out of the Philippine volcano Monday after a sudden eruption of ash and steam that forced villagers to flee en masse and shut down Manila’s international airport, offices, and schools. (AP Photo/Aaron Favila)

MANILA, Philippines — The Department of Environment and Natural Resources (DENR) on Monday warned the public against the danger of inhaling fine volcanic particles caused by Taal’s phreatic eruption.

At a press conference on the latest about Taal Volcano’s activities, DENR Undersecretary Benny Antiporda said smaller volcanic particles not seen by the naked eye goes straight to our bloodstream once inhaled.

(Just because the road has clear visual or doesn’t have smog means it’s already clean. It would only be known if the fine particles have already entered the body when symptoms already kicked in like for those who have respiratory problems like asthma.)

Antiporda specifically cited fine particulate matter (PM) 2.5., an air pollutant he called “alikabok” (dust) in layman’s terms, that is invisible to the naked eye. He then differentiated PM 2.5 from PM10, which is larger and more visible.

According to him, while some areas that have experienced rain now have better air quality because the volcanic particles or ash from Taal have already fallen to the ground problems could still arise.

(It could rise up again and be inhaled by people. Let’s expect that the situation could get worse when it comes to that ash because when that dries up and a vehicle passes through it or wind blows it, it will go back to the air.)

So, he advised the public to continue monitoring updates on Taal’s eruption and take precautionary measures.

“We still need to be careful at gamitin ang (use the) recommended face mask para masiguro ang kaligtasan (to ensure safety),” he said.