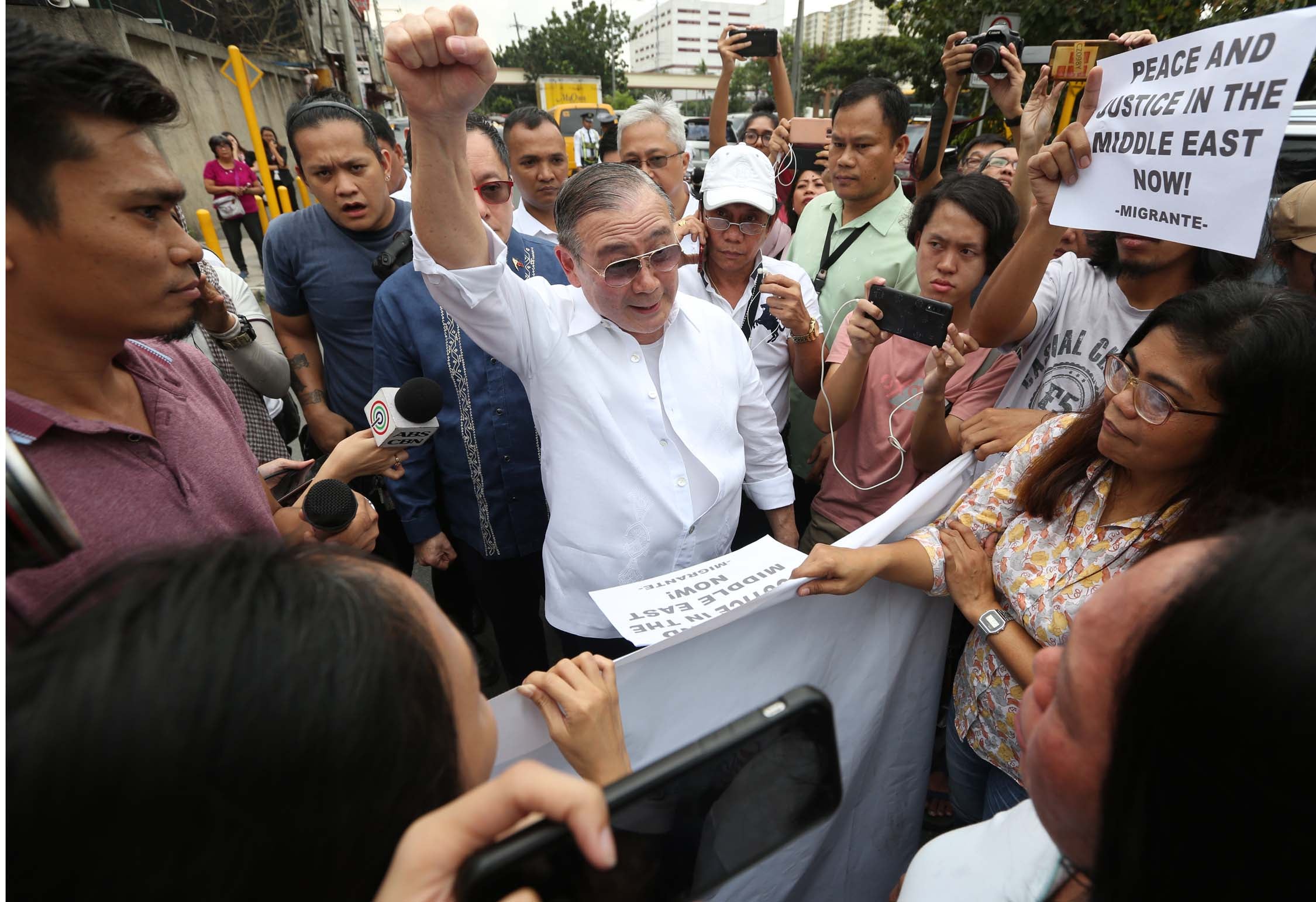 ‘MAKIBAKA!’ An angry Foreign Secretary Teodoro Locsin Jr., who dared protesters outside his office to beat him up, later calmly explains to them the
government’s plans to repatriate Filipino workers in the Middle East to keep them safe from a possible US-Iran war. Members of Migrante and relatives of
overseas Filipino workers (OFWs) were demanding a comprehensive program to ensure the safety of OFWs in the troubled region. —MARIANNE BERMUDEZ

Foreign Secretary Teodoro Locsin Jr. was fuming mad for a brief moment on Friday as he confronted demonstrators who were protesting against what they said was the government’s “inutile” policy that gave no real protection to overseas Filipino workers (OFWs) trapped in oppressive working conditions and looming war in the Middle East.

“Okay, fire. Go ahead, beat me up,” Locsin said at one point, approaching Migrante chair Arman Hernando, who was blasting the government’s deployment of troops to help repatriate Filipinos amid rising tension in the Middle East instead of humanitarian workers to assist thousands of their countrymen stranded in the troubled region.

“We are protesting because there are problems in the Middle East that the government has been unable to address. Our call is for the Duterte government to lay down a comprehensive program to ensure that our countrymen would not become victims of war there,” Hernando said.

He said the OFWs needed the services of humanitarian workers like doctors, social workers and translators, not soldiers.

‘Trio peligro’The protest was held a day after Environment Secretary Roy Cimatu flew to Qatar to set up a staging area for the repatriation of OFWs who may be caught in a possible full-blown war between the United States and Iran following the US assassination of Iran’s top general, Qasem Soleimani, last week.

The protesters carried a large banner with the pictures of President Duterte, Cimatu and US President Donald Trump, calling them the “trio peligro” (dangerous trio).

They displayed placards saying, “Ensure the safety of OFWs!” and “Peace and justice in the Middle East,” and chanted, “No to war in Middle East, save our OFWs!”

After his outburst, Locsin calmed down and tried to engage the protesters outside the Department of Foreign Affairs in a conversation and to explain to them the measures being taken by Duterte administration.

In answer to Hernando, who was asking what the government was doing to protect the OFWs in the Middle East, Locsin said the evacuation was underway even if the tensions have already subsided.

Locsin also said that those who wanted to go home, including those stranded in embassy shelters who could not leave due to lack of exit permits, would be repatriated at government expense.

For those in countries where there are no mandatory evacuations, Locsin said the government would respect their wish to stay.

Clenched fist“If they do not want to go home, stay there and we will protect them as much as we can. You know why? Because this is the government of Rodrigo Roa Duterte!” he said forcefully.

He then raised a clenched fist, expecting the protesters to cheer and do the same. Instead, some booed him and others corrected him, saying it’s the “government of the people.”

The secretary said he would also ask the politicians who keep on calling OFWs to come home to find jobs for them in the country.

Regarding the case of Filipino maid Jeanalyn Villavende, who was allegedly beaten to death by her Kuwaiti employers, Locsin said: “I already said, a life for a life. We are going to make sure that there is no compromise.”

Despite the “deescalation” of tension in the Middle East, Cabinet Secretary Karlo Nograles said all government agencies were “working double time to ensure a speedy” repatriation of OFWs from Iraq, where mandatory repatriation “will proceed because it’s better to be safe for everybody.”

“In mandatory repatriation, we will apply it to the fullest extent, and this is for the safety of our OFWs. Our primordial concern is their safety,” he added.

The Civil Aviation Authority of the Philippines on Friday said the country’s major airlines—Cebu Pacific, Philippine Airlines, and Air Asia—have committed to aid in the planned repatriation. (See related story on Page B4)Aside from evacuation by air, including the use of military planes, Nograles said, a chartered cruise ship could also be used “since it’s bigger and could accommodate more.”

Cost, safetyBut, he said, “you have to look at the cost, safety. So these are the factors that you take into consideration.”

He assured repatriated OFWs that they would be prioritized in getting employment in the government’s infrastructure projects, or they could be given training and livelihood packages to help them start their own businesses.

OFWs also have the option to be redeployed to jobs in countries outside the Middle East, and the government was communicating with Japan, Germany, China and Russsia to help accommodate them, Nograles said. —WITH A REPORT FROM JULIE M. AURELIO