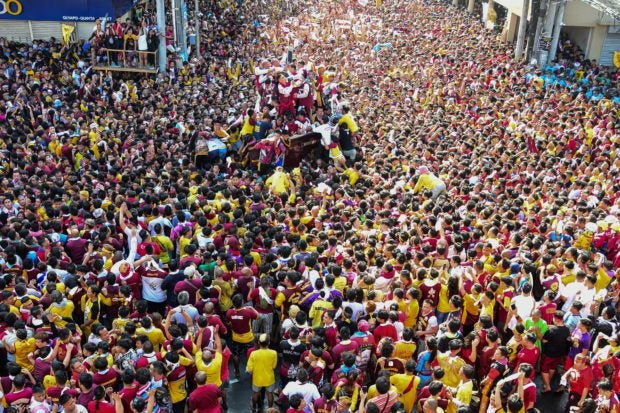 Thousands of barefoot devotees joined the religious procession in Manila on January 9, hoping to touch a centuries-old icon of Jesus Christ, called the Black Nazarene, which is believed to have miraculous powers. AFP

MANILA, Philippines — This year’s Traslacion showed the image of the Black Nazarene seemingly vanishing as throngs of devotees swarm up to touch the venerated icon believed to grant miracles t0 the faithful.

Considered as one of the biggest religious events in the world, the procession of the Black Nazarene kicked off from the Quirino Grandstand past 4 a.m. on Thursday with a sea of barefoot devotees hoping to get a chance to lay their hands or towels on Black Nazarene image.

Authorities have positioned 2,000 policemen to act as one massive “andas wall” to prevent devotees from blocking the front and sides of the carriage.

As the image started its journey back to Quiapo Church, police were able to stop devotees from approaching the “andas.” 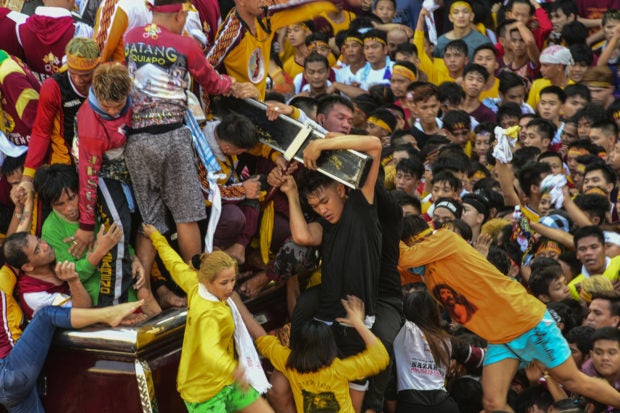 Devotees climb onto the carriage transporting the statue of the Black Nazarene as they try to touch it during an annual religious procession in its honour in Manila on January 9, 2020. AFP

But when the religious image of a kneeling Jesus Christ crosses the Ayala Bridge, devotees were able to slip into the “andas wall” and reach the statue.

The hijos, or church volunteers tasked to secure the icon, can also be seen struggling to hang on to the image as the crowd turns frenetic throughout the procession.

This year’s Traslacion has so far drawn in over two million devotees as the “andas” carrying the image of the Black Nazarene inched closer to its final destination at Quiapo Church.