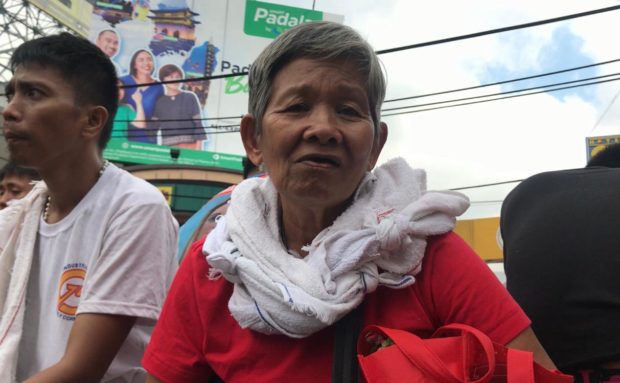 Natividad De Leon, a devotee of the Black Nazarene, sits alongside fellow Catholic faithfuls awaiting the arrival of the image at the Quiapo Church during this year’s Traslacion. (Photo by Cathrine Gonzales/INQUIRER.net)

MANILA, Philippines — After nearly five decades, Natividad De Leon still does not neglect the tradition she holds so dearly.

Facing the heat of the sun and sitting alongside other Catholic faithful, the 71-year-old devotee keeps her eyes glued to the Minor Basilica of the Black Nazarene on Thursday, awaiting the coming of the image from this year’s Traslacion.

But this was nothing new to her, as she said she started to take part in the celebration of the event since 1973. During that time, she was desperately praying that her cancer in the ovary be healed.

(A doctor told me I have cancer in the ovary. Since then, I have been crying about that in my prayer whenever I go to church.)

In the middle of her ordeal, De Leon said she had no one else to cling to for healing, since she could not afford the medicines recommended to her by her doctor.

It has been 47 years, but for De Leon, the healing she believes she received from the Black Nazarene is worth dedicating the rest of her life to the image.

“Ito ang panata ko (This is my devotion),” she stressed.