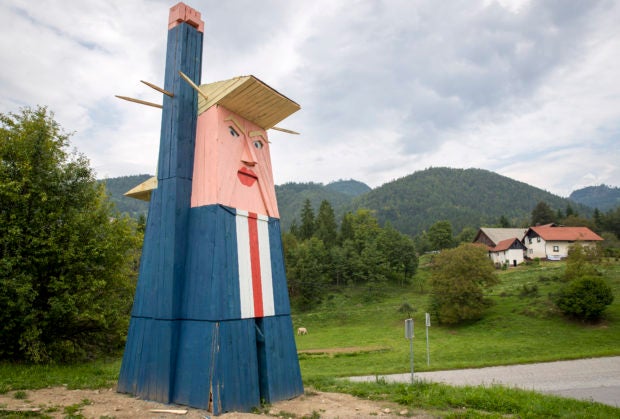 In this file photo dated Friday, Aug. 30, 2019, a wooden statue resembling Donald Trump near Kamnik, Slovenia. The wooden statue nearly eight-meter high (26 feet) of U.S. President Donald Trump that was constructed in 2019, has been destroyed by fire on Thursday, Jan. 9, 2020, in the homeland of his wife Melania Trump. (AP Photo/Darko Bandic, FILE)

LJUBLJANA, Slovenia — A wooden statue mocking U.S. President Donald Trump was burned to the ground Thursday in Slovenia, the birthplace of his wife Melania, authorities said.

The nearly eight-meter (26-foot) high construction, erected last year in a village northeast of Slovenia, showed Trump with his trademark hairstyle, blue suit, white shirt, and a long red tie. His right arm — fist clenched — was raised high like that of New York’s Statue of Liberty.

Slovenian police are looking for the arsonist.

When triggered, a mechanism inside the statue opened a red-painted mouth and shark-like teeth used to appear.

“Like all populists, the statue has two faces,” its creator, Tomaz Schlegl, said when he unveiled the statue last August. “One is humane and nice, the other is that of a vampire.”

Although the construction quickly became a tourist attraction, some local villagers were unhappy with its appearance, pledging to torch it by Halloween, October 31. It had to be moved to another village in the area.

Milan Balazic, the mayor of Moravce where the statue ended up, said that unknown arsonists burned it. 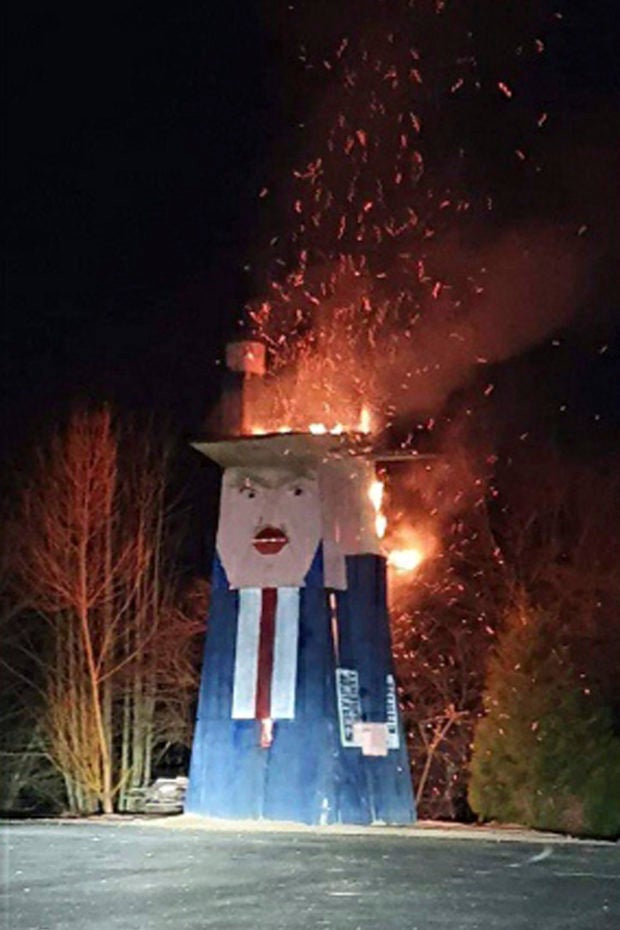 In this photo provided by the municipality of Moravce, wooden sculpture resembling U.S. president Trump is on fire, in Moravce, Slovenia, Thursday, Jan. 9, 2020. The wooden nearly eight-meter high (26 feet) statue mocking U.S. President Donald Trump that was constructed last year, has been destroyed by fire in the homeland of his wife Melania Trump. (Municipality of Moravce via AP)

He said the torching of the statue “is a symbol of intolerance toward artistic projects in our society.”

It’s not the first time in Slovenia that a member of the Trump family has been carved in wood.

A life-size sculpture of the U.S. first lady cut from the trunk of a linden tree was unveiled in her hometown of Sevnica last June, drawing mixed reactions from residents.

The first lady, born Melanija Knavs, changed her name to Melania Knauss when she started modeling. She settled in New York in 1996 and met Trump two years later.

There are mixed feelings about Melania in Slovenia where hopes were high that she would promote her picturesque Alpine home country after Trump took office. But she has rarely mentioned Slovenia in her public appearances and hasn’t visited the small central European country since Trump’s inauguration.